An US-based advocacy group for minorities in Egypt is alerting the world about the disappearances and forced conversions to Islam of Christian Coptic women after a video emerged depicting a missing Coptic woman wearing a black niqab and claiming she converted to the religion.

Ranya Abd al-Masih (meaning “servant of Christ” in Arabic), 39, disappeared in Egypt on April 22, Coptic Solidarity, a US-based group reported. She was a high school teacher in a city north of Cairo, and has three daughters. A few days after her family contacted authorities, a video depicting Ranya wearing a black niqab emerged.

In the video, Ranya says in between tears that she has finally and formally converted to Islam, and she had secretly been following the religion for nine years. She says that she took all her jewelry and belongings the day she left home so that it wouldn’t appear as though she’d been kidnapped, but that she left by her own volition.

Her family says these claims are just for public consumption, and that Ranya was likely getting cues from others at gunpoint or under the influence of drugs. Her family also adds that she didn’t take her jewelry and belongings as she had claimed, according to Coptic Solidarity.

Muslim acquaintances of the family also found the conversion hard to believe; Ranya’s social media was allegedly saturated with Christian imagery before her disappearance.

Ranya’s case is not an anomaly, according to Coptic Solidarity. Copts are the largest religious minority in Egypt, and have faced discrimination at all levels of Egyptian society largely for their Christian faith. They’ve also been victims of church bombings and other targeted terror attacks, such as the twin suicide attacks at two Coptic churches in Egypt during Palm Sunday in 2017. 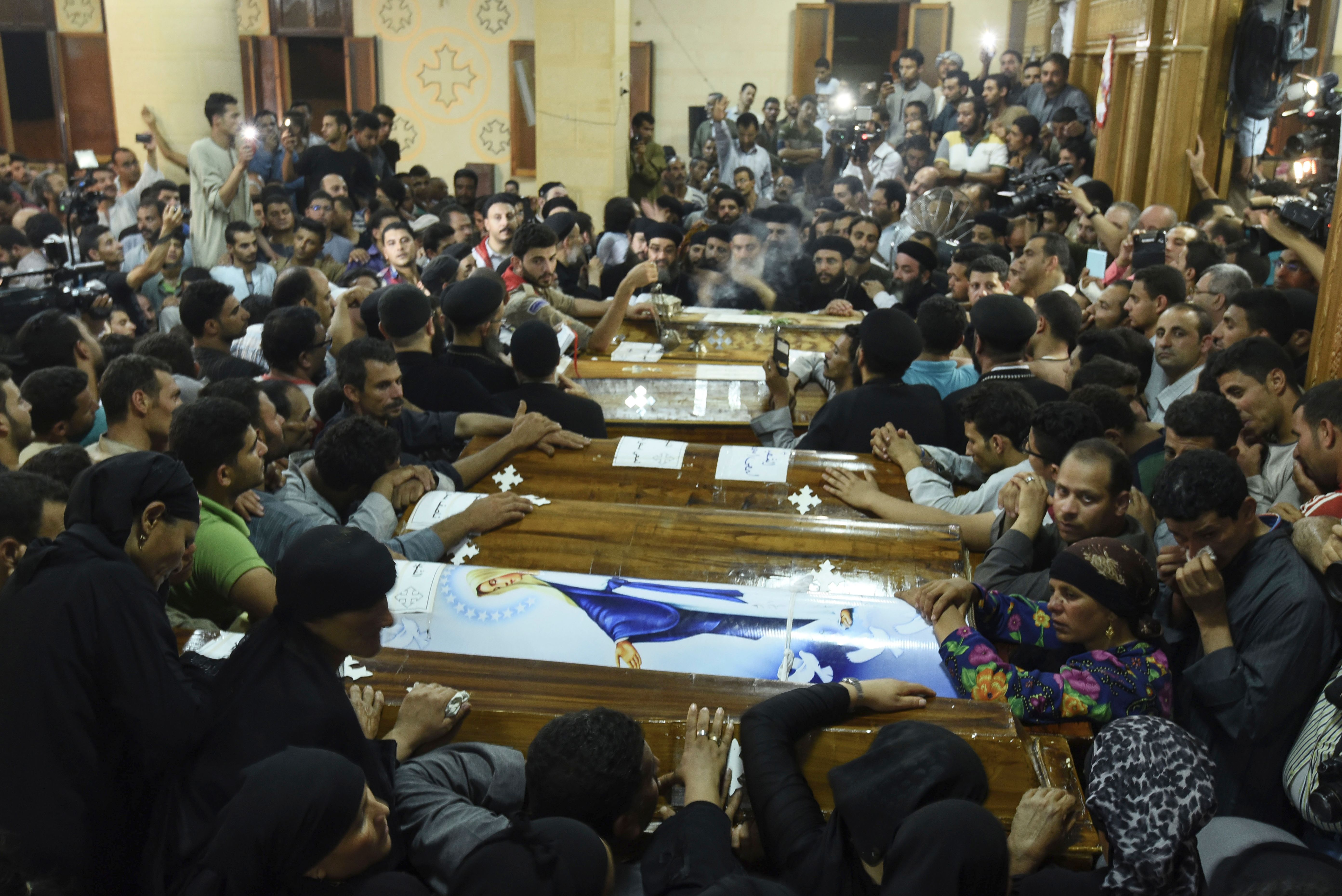 Relatives of killed Coptic Christians grieve by the coffins during the funeral at Abu Garnous Cathedral in the north Minya town of Maghagha, on May 26, 2017. (MOHAMED EL-SHAHED/AFP via Getty Images)

The phenomena of Coptic Christian women and girls going missing and then appearing on video claiming to have converted to Islam is ongoing in Egypt, the group says. (RELATED: Two Gunmen Kill 10 During Attack On Coptic Christian Church)

“An estimated few hundred — may be up to 500 — Coptic women and girls have been kidnapped/lured in the last decade in Egypt” Lindsay Griffin tells Daily Caller. “Very few of these women have been found and reunited with their families because the state security typically refuses to take action in their cases.”

Ranya’s brother believes the scheme is perpetrated by the Muslim Brotherhood, which is the politically correct way of indicating any “Muslim radical” in Egypt, according to the group. But precedent based on ample evidence points at Salafists and other Islamist groups who operate with implicit support from state organs.

A former kidnapper associated with these networks has admitted that kidnappers get paid for every Coptic girl they abduct, the group says.

“We know from the few who have been rescued that there is a similar pattern in the kidnapping or luring and that it is well-organized and operating with implicit support of Egyptian state security,” Griffin said.

“The element of shame is used to make the girls believe their families and communities wouldn’t want them back after they have been sexually assaulted, forcibly converted and married to a Muslim under duress.” 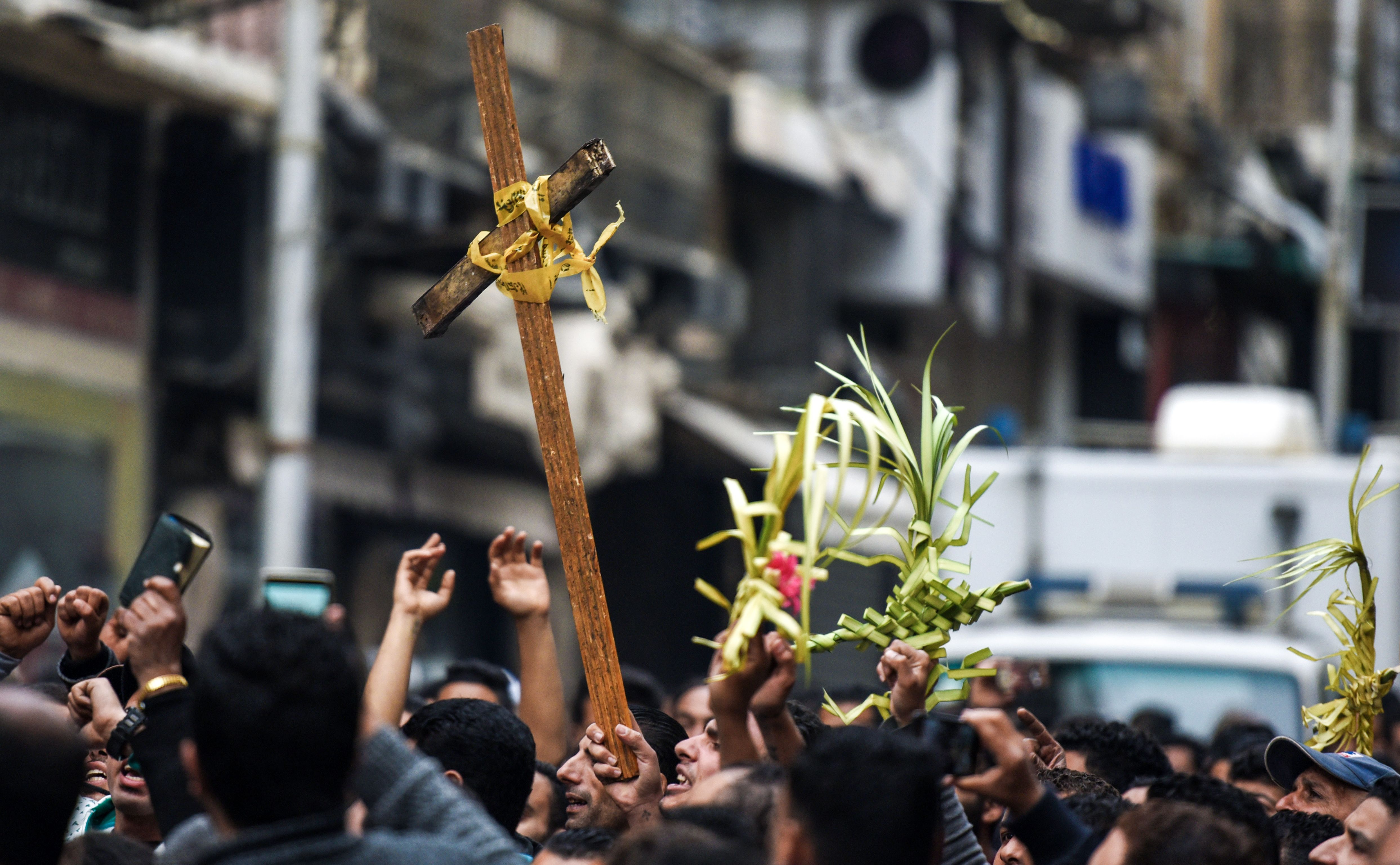 Egyptians raise a wooden cross and palm leaves originally intended for Palm Sunday celebrations, as they gather outside the Coptic Orthodox Patriarchate in Alexandria after a bomb blast struck outside as worshippers attended Palm Sunday mass on April 9, 2017. (MOHAMED EL-SHAHED/AFP via Getty Images)

Unlike in Western countries, conversion between religions carries serious legal consequences. Religious affiliation appears on all formal documents, meaning that if a woman converted to Islam, it’s nearly impossible to change the national ID back to the original faith.

Marriage, custody, divorce, inheritance, and other even education are determined by religious identification. For women who leave Islam, the group says, honor killings are often encouraged or tolerated, making conversion a life-threatening decision in Egypt.

“Government officials and state security claim that these women have converted to Islam and secretly eloped,” Griffin adds.

“Since the families are prevented from having any private contact with the girls who are found, it is impossible to establish if they converted in free will or are being threatened and coerced.”