Speaker of the House Nancy Pelosi and congressional Democrats included $25 billion for the US Postal Service (USPS) in the $3 trillion coronavirus stimulus bill introduced Tuesday.

The funding for the USPS was included in the “Health and Economic Recovery Omnibus Emergency Solutions” or HEROES Act. 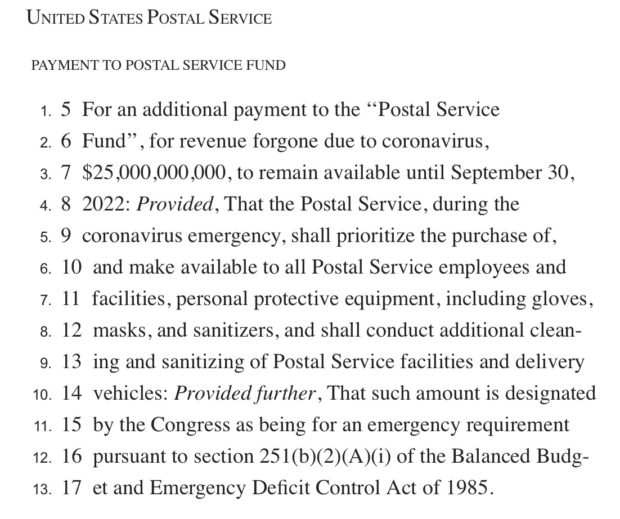 The CARES Act, the first coronavirus stimulus bill, already included $10 billion in loan guarantees for the USPS. A report by the United States Postal Regulatory Commission released May 8 showed the USPS had $9 billion in cash on hand in addition to the $10 billion in the CARES Act.

President Donald Trump threatened to veto the CARES Act in April if it contained any bailout money for the USPS, the Hill reported.

“We told them very clearly that the president was not going to sign the bill if [money for the Postal Service] was in it,” a Trump administration official told the Washington Post.

Trump has also threatened to deny the USPS money if it did not increase the cost of shipping for companies like Amazon. “If they don’t do it, I’m not signing anything, and I’m not authorizing you to do anything,” he reportedly said to Treasury Secretary Steven Mnuchin. (RELATED: House Democrats Release Their Phase 4 $3 Trillion Coronavirus Relief Package)

The GAO had previously declared the USPS was financially “unsustainable.” A 2019 report found “USPS’s overall financial condition is deteriorating and unsustainable. USPS has lost $69 billion over the past 11 fiscal years—including $3.9 billion in fiscal year 2018. USPS’s total unfunded liabilities and debt ($143 billion at the end of fiscal year 2018) have grown to double its annual revenue.” They warned “although USPS has stated that it will aggressively reduce costs within its control, its plans will not achieve the kind of savings necessary to significantly reduce current operating costs.”

In their latest report, the GAO suggested cost-saving measures for the USPS, such as reducing mail delivery to 5 days from the current 6. (RELATED: No Money For The Post Office. Instead, Inject Lysol Into Your Lung’: Pelosi Uses Press Conference To Attack Trump)

According to OpenSecrets, political contributions from the USPS overwhelmingly favor Democrats, with only 27 percent of donations going to Republicans and 73 percent, or $616,663, going to Democrats so far in the 2020 election cycle.