Herridge went public with documents, declassified by acting Director of National Intelligence Richard Grenell, that revealed former Vice President Joe Biden was among those who had called for Flynn to be unmasked. (RELATED: Fox News’s Catherine Herridge Heads To CBS)

Andrew Bates, rapid response director for Biden’s presidential campaign, referred to Herridge in a now-deleted tweet as a “partisan, rightwing hack” and a “regular conduit for conservative media manipulation ploys,” appearing to take issue with her for not reaching out to Biden for comment prior to publishing the documents. 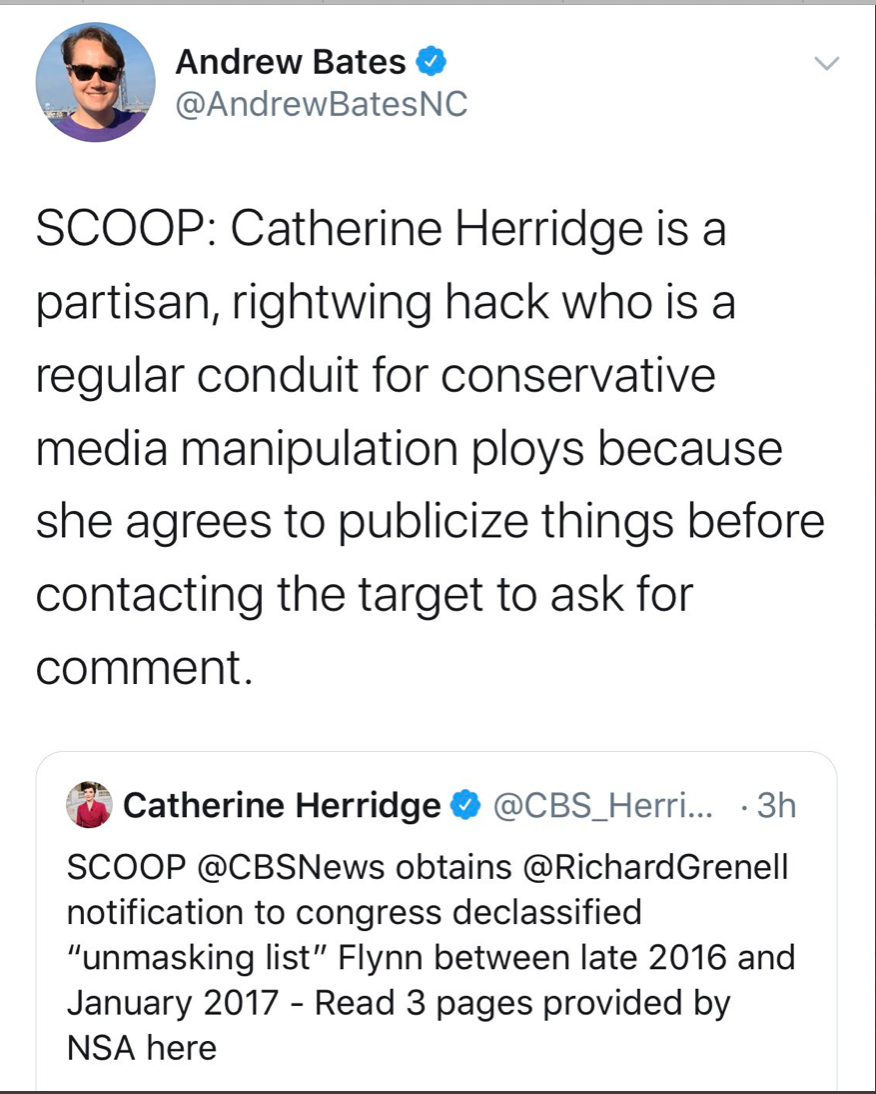 Some quickly rallied to Herridge’s defense, saying that she was simply reporting on what happened. (RELATED: Biden, Comey, Brennan Submitted Flynn ‘Unmasking’ Requests)

And @CBS_Herridge deserves a lot of credit. There is probably immense pressure for her not to be writing about this stuff. Even when she’s just reporting on a list of names she is being attacked.

Biden’s team is freaking out about the revelations because they suggest Biden lied about Flynn. https://t.co/HuIJeVD0Ht

Delete this.@CBS_Herridge is one of the best, and most credible journalists in Washington.@JoeBiden has had *many* opportunities to comment on his involvement — like yesterday when he caught and contradicted himself mid-lie after 64 seconds. https://t.co/1bWkonqreS

Hey you know Weija Jiang works for CBS as well. Where’s her solidarity tweet in support of Catherine Herridge?

This is a nasty BS smear. Catherine Herridge is a fantastic reporter and everyone knows it. https://t.co/a62I2wItNA

There were a few who appeared to agree with Bates’ assessment of the story, but they stopped short of attacking Herridge directly.

Can I recommend a way reporters should be covering the “unmasking” news?

It’s really pretty simple. If you don’t cover it this way, you’ve failed at your job and are actively facilitating a partisan political scheme. https://t.co/zTr1Dayshf

Bates’ attack comes just ten days after World Press Freedom day, when his own boss released a statement promising “no bullying of the media by tweet.”

“Attacking the press and attempting to intimidate independent media is a standard part of the authoritarian playbook. Efforts to undermine public confidence in the integrity of fact-based reporting violate our core American values and threaten our very system of government,” Biden said. “Journalists hold those in positions of authority accountable, investigate and document abuses of power, and expose the truth for everyone to see. In a Biden White House, there will be no bullying of the media by tweet.”