In an effort to recover the summer tourist season the EU is proposing a gradual reopening of its borders.

The EU’s executive commission endorsed a return Wednesday to “unrestricted free movement” across Europe, which would include elements of required face mask wearing and social distancing, according to Reuters.

“Our thoughts are now turning toward summer and to the places that we love to travel,” said Margrethe Vestager, a Commission deputy who helped introduce the proposals. “That means taking gradual, careful steps to help travel restart in line with what science tells us.”

The commission was lauded by tourism industry groups for their efforts to save the industry. Tourism accounts for approximately 10% of the EU economy. 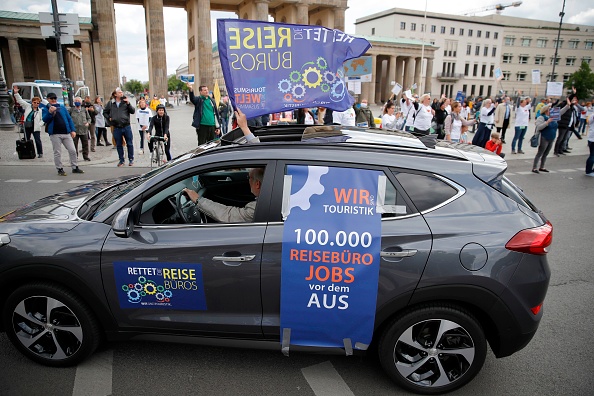 Travel agency workers demonstrate on May 13, 2020 in front of Berlin’s landmark the Brandenburg Gate in order to point to the economic plight of the touristic sector. (Photo by ODD ANDERSEN/AFP via Getty Images)

“This looks like good news,” said Toni Mayor, the president of a hotels’ association in Spain’s Valencia region. “If this combines with less pressure from the virus, as it seems, … we might just be able to half-save the summer season.”

Some foreign ministers from European countries have expressed apprehension of reopening their borders to travelers from abroad, including Spain which according to Reuters has plans to keep its borders closed to tourists until July. (RELATED: Birth Tourism Hotel For Chinese Nationals Ordered To Be Shut Down)

The Commission’s proposal is non-binding for the EU’s 27 member nations and external borders would remain closed until at least mid-June for non-essential travel.