A Democratic sheriff in one of Michigan’s most populous counties declared that his department has not and will not enforce government-imposed lockdown measures against businesses or citizens.

Appearing Friday on the popular podcast “No BS News Hour,” Genesee County Sheriff Chris Swanson told host Charlie LeDuff that, while he understands that law enforcers do not make the law, there is also some measure of discretion involved. 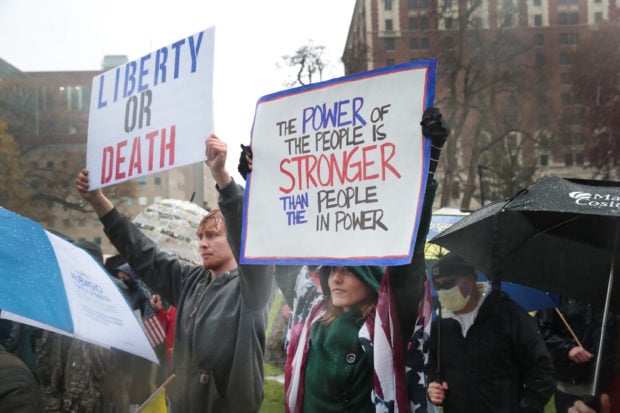 LANSING, MICHIGAN – MAY 14: Demonstrators hold a rally in front of the Michigan state capital building to protest the governor’s stay-at-home order on May 14, 2020 in Lansing, Michigan. (Photo by Scott Olson/Getty Images)

“You know, people have to talk about the Constitution in its entirety, and that’s the separation of powers, and the sheriff is the executive branch of that separation,” Swanson said. “We enforce laws, with discretion, remember that.”

“The judicial branch determines if whatever we’re enforcing made by the legislatures is … what they wrote, Constitutional,” he continued. “It is dangerous for police officers to determine what’s right and what’s wrong.”

The Genesee County sheriff cited the speed limit as an example of something he doesn’t have the power to overtly tell people to “go as fast as you want.”

“I can’t do that,” he said. “But what I can do is say, ‘I’m not gonna park cars there and pull over everybody that’s going 1 over.’ So I tell this to my people … the business side they’re dying … we have not raided a business. We have not shut a business down. We’re not pulling people over. We’re not writing tickets, and don’t expect us to do it.”

The conversation occurs at around the 28-29 minute mark of the podcast, which was also broadcast via Facebook.

While several rural Michigan sheriffs have expressed similar sentiments, Swanson’s party affiliation and status as sheriff of one of the state’s most populous counties, with the county seat in Democratic Party-dominated Flint, was particularly notable.