Federal authorities on Thursday handed down murder, attempted murder and other charges against 10 people believed to be associated with the MS-13 gang, following the grisly murders of three people.

An investigation by Immigration and Customs Enforcement (ICE), the New York City Police Department and the FBI led to four unsealed complaints within the U.S. Attorney’s Office for the Eastern District of New York, ICE announced on Thursday. The complaints charged 10 members and associates of La Mara Salvatrucha, better known as MS-13, with murder in-aid-of racketeering, attempted murder, murder conspiracy and other offenses.

The men were apprehended for their alleged connection to three murders and other crimes, U.S. Attorney Richard Donoghue of the Eastern District stated. The killings were conducted “public execution” style, according to authorities.

One individual was arrested Wednesday in Maryland, five were arrested on Thursday in New York and California and four were already arrested and will be transferred to federal custody on Friday. 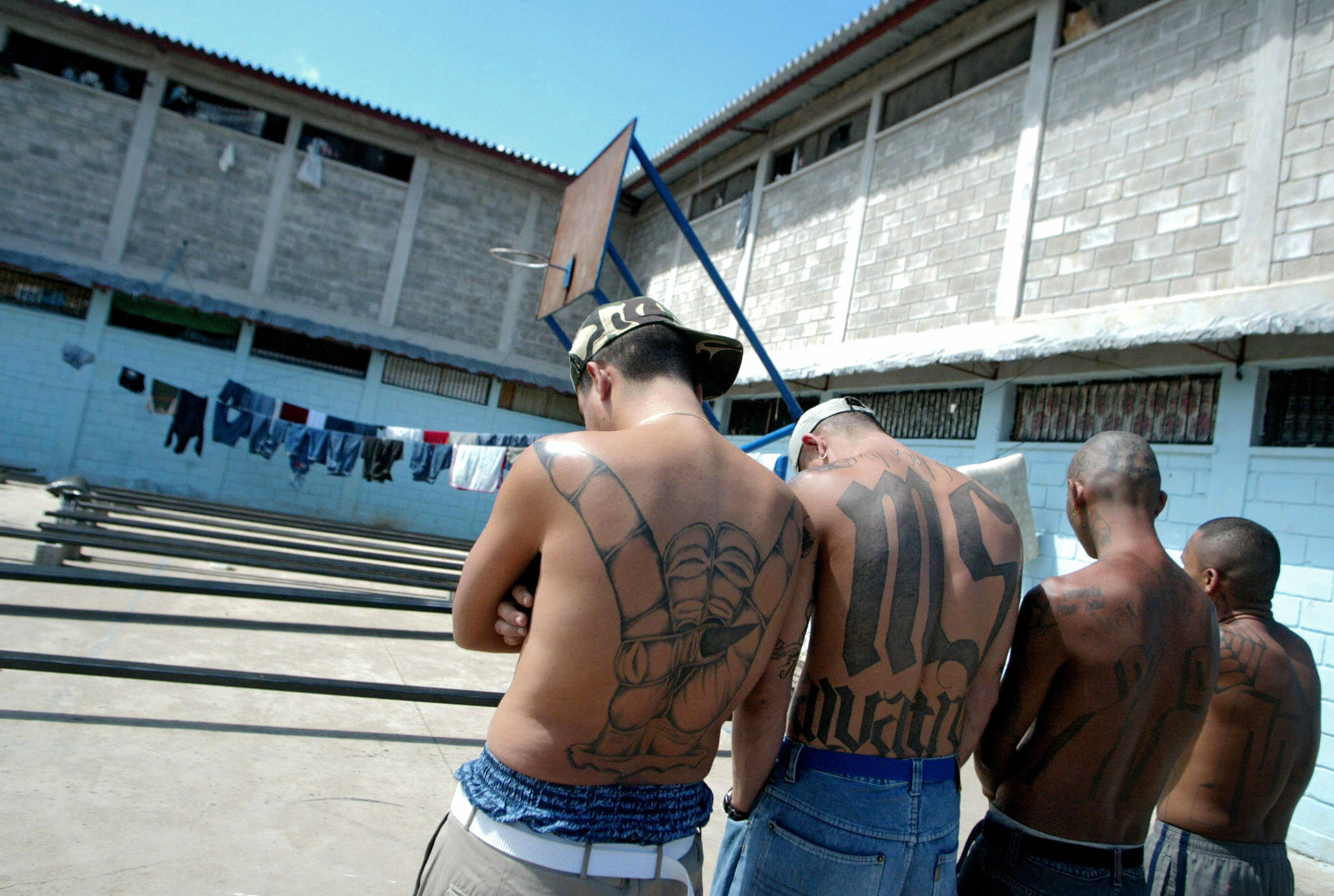 Four unidentified members of the Mara Salvatrucha “MS-13” (juvenile gang) show their tatoos in the unit where they are kept imprisioned in the National Penitentiary in Tamara, 30km north of Tegucigalpa, 01 February 2006. (ELMER MARTINEZ/AFP via Getty Images)

“The murders and crimes of violence allegedly committed by these defendants are trademark MS-13 offenses — cold-blooded, senseless and brutally violent — and pose a grave danger to the residents of our communities,” Donoghue said in a prepared statement.

On the night of April 23, 2018, according to the complaints, 17-year-old Andy Peralta was confronted by several MS-13 associates in a park in Flushing, a neighborhood in Queens, who confused the crown tattoo on his chest as a symbol of the rival Latin Kings gang. The assailants fatally beat, stabbed and strangled him and slashed his tattoo.

During the early morning of Nov. 4, 2019, Victor Alvarenga was shot and killed close to his home in Flushing, Queens. Alleged MS-13 associates are accused of waiting outside for Alvarenga, and then shooting him multiple times in the head and body after he emerged from his home.

Douglas Melgar-Suriano and Jairo Martinez-Garcia were charged with his murder.

The third individual to be murdered was Abel Mosso. In the afternoon of Feb. 3, 2019, three men followed Mosso, whom they believed was a member of the rival 18th Street gang, onto a subway car in Flushing and assaulted him, dragging him out onto the platform. 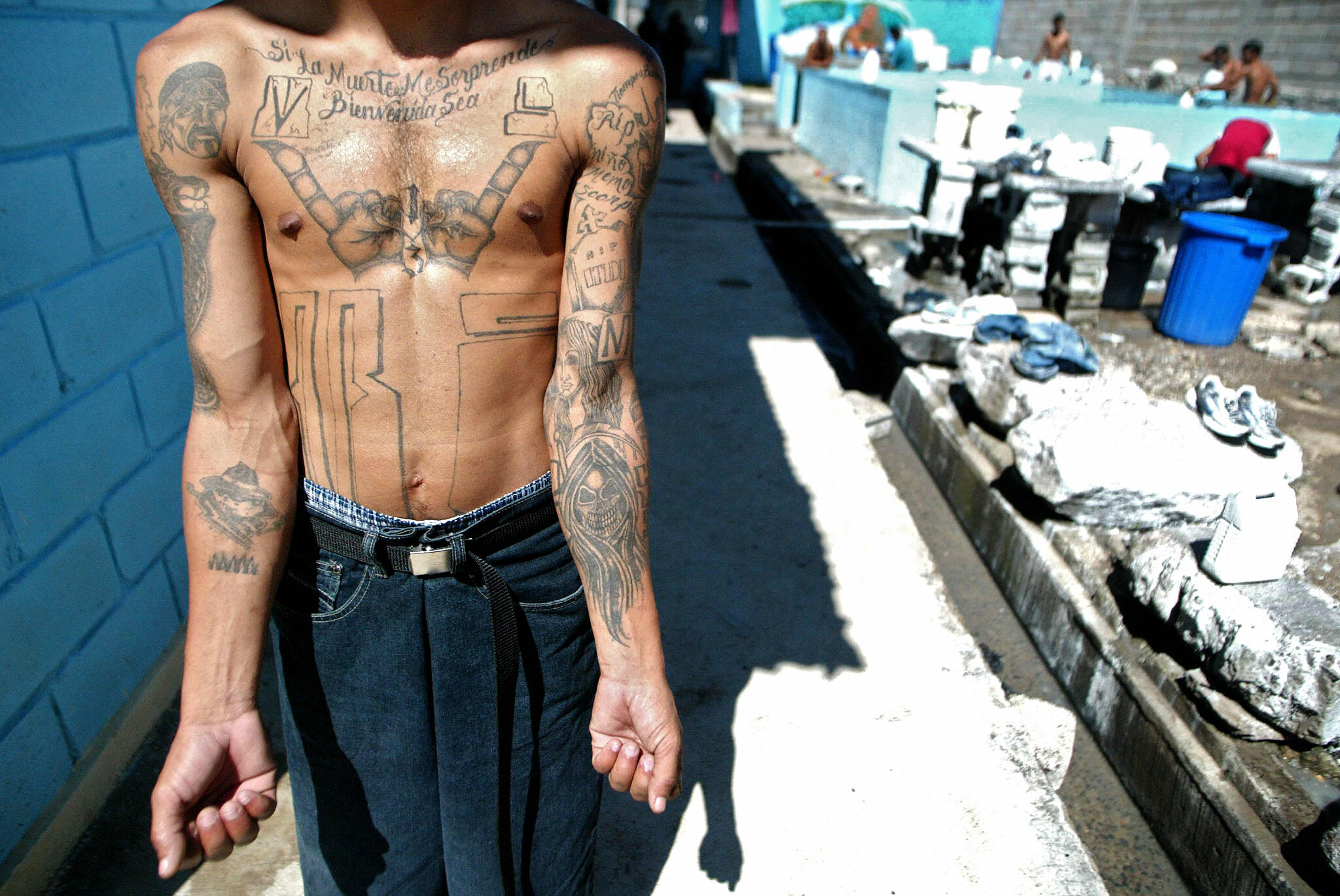 An unidentified member of the Mara Salvatrucha “MS-13” (juvenile gang) shows his tatoos in the unit where he is kept imprisioned in the National Penitentiary in Tamara, 30km north of Tegucigalpa, 01 February 2006. (ELMER MARTINEZ/AFP via Getty Images)

The assailants pulled out a gun and warned onlookers in Spanish: “Nobody get involved, we’re MS-13, we’re going to kill him.” After a brief skirmish for the gun, Mosso was shot multiple times. Ramiro Gutierrez and alleged gang associates Tito Martinez-Alvarenga and Victor Lopez have been charged with Mosso’s murder.

“Public executions are just another sobering example of the savagery that MS-13 engages in with the alleged criminal mayhem caused by those charged today,” Peter C. Fitzhugh, special agent in charge of [Homeland Security Investigations] New York, said in a statement. (RELATED: Previously Deported MS-13 Gang Member Sentenced To Prison)

Other alleged associates stand accused of plotting to murder an MS-13 gang member who failed to carry out an execution against a rival gang member.

If convicted, Donoghue said six of the men face mandatory life sentences and are eligible for death row. Another three men could face up to life in prison.

New York, which refuses to cooperate with federal immigration authorities, has long suffered from a major MS-13 presence. In December 2019, state authorities announced charges against nearly 100 MS-13 gang members, one of the largest busts of the gang in New York history.

The murders in New York by gang members have even attracted the attention of the White House. President Donald Trump invited the mother of Kayla Cuevas to his 2018 State of the Union address. Cuevas at age 16 was brutally murdered by MS-13 gang members in a wooded area in Suffolk County, New York.