The U.S. government has spent trillions of dollars attempting to mitigate the fallout from the coronavirus pandemic, but concerns over spending are starting to mount, along with the national debt.

The nation’s debt now stands at $25 trillion as spending concerns have naturally taken a back seat to the recovery effort. As most of the country begins a slow return to normalcy, some Republicans, including Texas Sen. Ted Cruz have begun to sound the alarm on Congress’ spending sprees. On the other hand, some Republicans are reportedly urging their leadership to pursue what Senate Majority Leader Mitch McConnell has deemed a “blue state bailout.” (RELATED: FLASHBACK: Jan.21: Fauci Says Coronavirus ‘Not A Major Threat’ To U.S.)

Republican Sens. Mitt Romney of Utah, Susan Collins of Maine, Shelley Moore Capito of West Virginia, Bill Cassidy and John Kennedy of Louisiana, and Lisa Murkowski and Dan Sullivan of Alaska have all urged McConnell to authorize more aid to states, according to The Hill. (RELATED: Latest Budget Deal A Tough Pill To Swallow For Conservatives)

Cassidy and Democratic New Jersey Sen. Bob Menendez have teamed up on legislation that would create a $500 billion fund for state and local governments facing a budget crisis over their decisions to shut down their economies. The senators said the legislation is intended to increase “flexibility for states and local governments to use the funds to plug revenue losses.”

Cassidy and Menendez’s proposal is similar to provisions in House Democrats’ “Heroes Act,” which would send hundreds of billions of dollars in unconditioned aid to state and local governments. That proposal championed by House Speaker Nancy Pelosi narrowly passed the House on Friday night, with support from just one Republican. Republican New York Rep. Peter King, who is retiring at the end of the year, voted for the bill, saying he was desperate to get funding for his hard-hit state.

“Look, I disagree with a lot of things that are in that bill: some of the provisions involving illegal immigrants, some of the absentee ballots, the mail, all that stuff. But the fact is, to me, [Majority Leader Mitch] McConnell sort of laid it down … he’s talking about no federal aid to state and local governments,” King said. 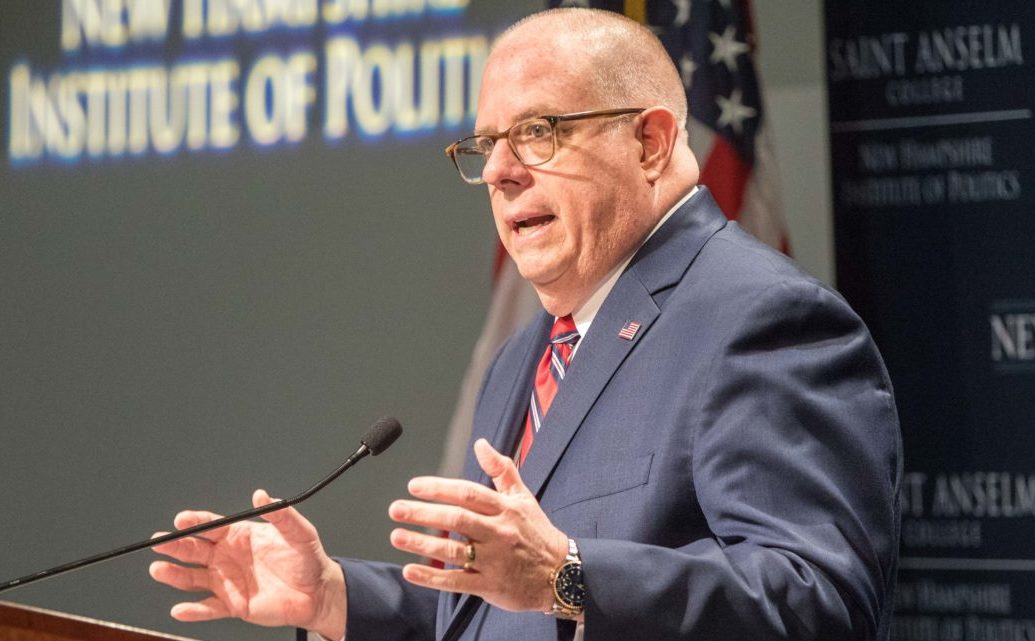 Maryland Gov. Larry Hogan speaks at the New Hampshire Institute of Politics as he mulls a Presidential run on April 23, 2019 in Manchester, New Hampshire. (Photo by Scott Eisen/Getty Images)

Other blue state Republicans have also pushed back on McConnell’s opposition to a bailout for state and local governments. Maryland Gov. Larry Hogan, one of the few Republican governors in the country who continues to keep parts of his state shutdown, ripped the majority leader over his “blue state bailout” terminology, calling it “complete nonsense.”

Hogan co-wrote a letter with Democratic New York Gov. Andrew Cuomo last week, asking Congress to foot the bill for their budget shortfalls. Their requests included “$500 billion in fiscal support for state budgetary shortfalls resulting from the pandemic, enhanced FMAP funding to provide healthcare to our most vulnerable, and 100 percent federal cost share for FEMA response and recovery efforts.”

Other Republicans have stood with McConnell and are urging President Donald Trump to oppose bailouts for state and local governments. Republican Sens. Rick Scott of Florida, Ted Cruz of Texas, Mike Lee of Utah, Mike Enzi of Wyoming, and Ron Johnson of Wisconsin wrote a letter to the White House late last month, arguing that the rest of the country shouldn’t have to pay to fulfill big spending promises in states like New York.

“States like New York are calling for billions in unrestricted aid — not just money for coronavirus recovery, but for pre-existing state programs and debts. New York’s rainy day fund is one of the lowest in the nation, and the state owes over $450 billion in unfunded pension and post-employment benefits. Other states are in even worse shape. Illinois has already requested a $40 billion bailout, most of which would go to pension and budget shortfalls caused by decades of fiscal mismanagement,” the senators wrote.

“Americans expect that their tax dollars will be used for Coronavirus response, not to backfill decades of bad fiscal policy.”