Democratic New York Mayor Bill de Blasio said Monday that any beachgoer who attempts to swim in the water this weekend will “be taken right out of the water.”

The mayor said at a press briefing that beaches will be open on Memorial Day weekend, but added that swimming is off limits as strict coronavirus restrictions remain in place. (RELATED: FLASHBACK: Jan.21: Fauci Says Coronavirus ‘Not A Major Threat’ To U.S.)

Join us at City Hall for a COVID-19 update. https://t.co/FWtESgADIF

“There’s a whole lot of things that will not be allowed at any beach in the state, but you know we’re holding out the hope that at some point we could open up, and we’re training the lifeguards, and we’ll be ready,” de Blasio told reporters. “No swimming, no sports, no gatherings, no parties. Just common sense, observe social distancing. If you walk on the beach, do it for a limited period of time, get back home like everybody else.” 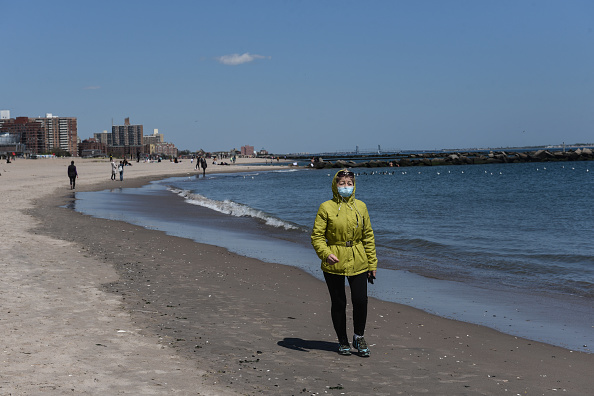 A person walks on the beach while wearing a protective mask on May 13, 2020 in the Coney Island neighborhood in the Brooklyn borough in New York City. (Photo by Stephanie Keith/Getty Images)

De Blasio then went on to discuss “enforcement” mechanisms for the restrictions, which he said could include fencing along the city’s beaches. (RELATED: Dan Crenshaw: Democrats ‘Want To Make Sure Americans Don’t Work’)