The annual Memorial Day weekend motorcycle rally honoring veterans will roll on despite several hurdles, including the district’s own lockdown orders due to COVID-19.

“There were plans to draw thousands to D.C. for the roaring event, but due to the pandemic riders are now asked to ride in their own communities,” according to a report from D.C.’s WUSA9 posted to the group’s Facebook page.

Artie Muller, Rolling Thunder’s founder, announced 2019 would be the 32-year rally’s final year riding through the nation’s capital but a new group, AMVETS, has taken it upon themselves to continue the tradition. They are challenging participants this year to ride in their own communities to honor their brothers and sisters and continue the Memorial Day weekend tradition in spite of the current disease outbreak.

“The event is now called Rolling to Remember and next Sunday, May 24th, organizers are challenging motorcycle riders to ride 22-miles in support of their mission,” said the report from WUSA9. 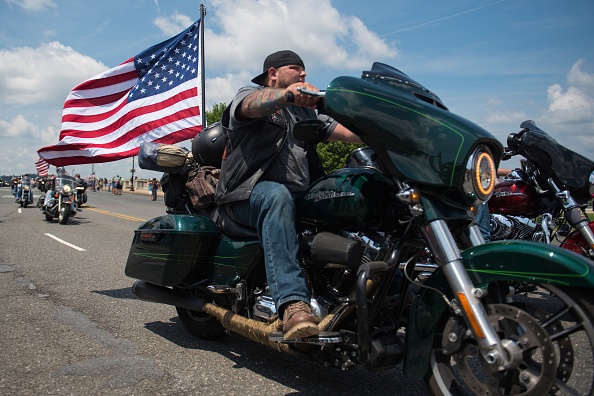 Thousands of bikers and military veterans take part in the Rolling Thunder motorcycle parade in Washington DC, on May 27, 2018. (ERIC BARADAT/AFP via Getty Images)

Uncertainty over whether the event would even continue was a result of what Muller indicated as a lack of cooperation from Pentagon officials and “increased harassment to our supporters and sponsors,” per the Washington Post.

During what was expected to be the group’s final rally President Donald Trump speculated it would continue, tweeting that the ride “WILL be coming back to Washington, D.C.” (RELATED: ‘Rolling Thunder’ Takes Its Final Ride In 2019, Unless President Trump Gets His Way)

The Great Patriots of Rolling Thunder WILL be coming back to Washington, D.C. next year, & hopefully for many years to come. It is where they want to be, & where they should be. Have a wonderful time today. Thank you to our great men & women of the Pentagon for working it out!

This year’s rally will start at noon on Sunday and participants will be able to plan, track and share their rides via an app called REVER.

“The health and safety of our nation’s veterans, families and fellow patriots, is our first priority,” says Rolling to Remember’s website. “The 82,000 POW/MIA and the veterans suicide epidemic must not be forgotten. We will continue the tradition.”