The woman at the center of Roe v. Wade reportedly confessed that she was paid to renounce her pro-abortion stance, according to an upcoming documentary.

Norma McCorvey said that her renunciation of the pro-abortion movement was “all an act” in the 79-minute film AKA Jane Roe, the Daily Beast reported Tuesday. In the last 20 minutes of the documentary, the now deceased McCorvey said she faked her conversion, and the pro-life movement weaponized her story.

“This is my deathbed confession,” McCrovey said in the documentary  in an interview from her nursing room home, according to the Daily Beast.

Documentary director Nick Sweeney asked McCorvey if evangelicals used her as a trophy. “Of course,” she said. “I was the Big Fish.”

“Do you think you would say that you used them?” Sweeney asked her. (RELATED: Unsealed Invoices Show Planned Parenthood Billed A Tissue Company Nearly $25K For Fetal Body Parts)

“Well,” McCorvey said, “I think it was a mutual thing. I took their money and they took me out in front of the cameras and told me what to say. That’s what I’d say.”

“I’m a good actress,” McCorvey added, detailing a few examples of scripted pro-life comments she would make. “Of course, I’m not acting now.” 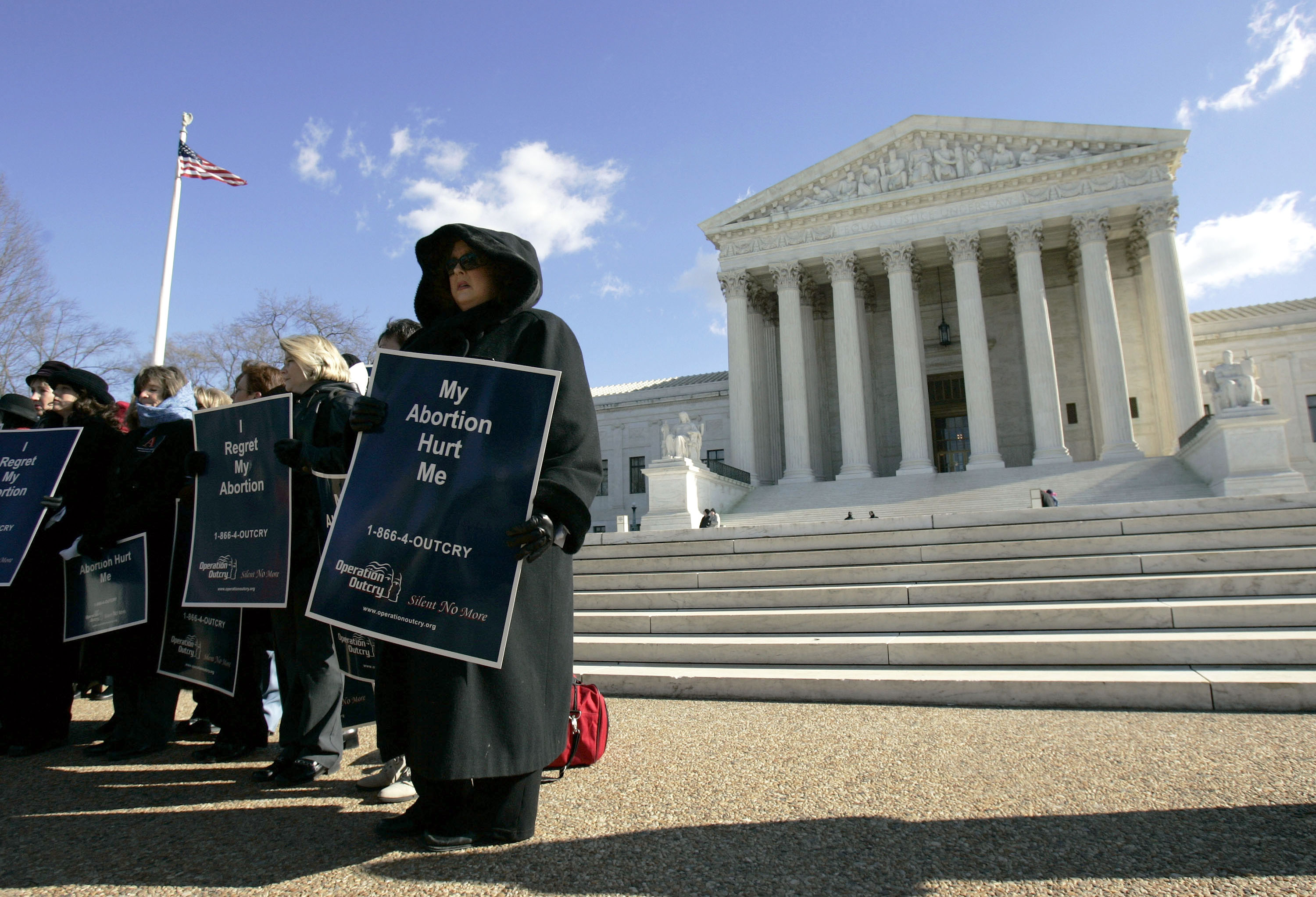 WASHINGTON – JANUARY 18: Demonstators stand in front of the U.S. Supreme Court on January 18, 2005 in Washington, DC. Norma McCorvey, along with the Justice Foundation are petitioning the Supreme Court to reverse it’s decision in Roe v. Wade. (Photo by Travis Lindquist/Getty Images)

In 1995, McCorvey revealed that she was the woman known as Jane Roe in the 1973 Supreme Court case Roe v. Wade, which established a woman’s legal right to abortion. McCorvey was not able to get an abortion as a queer, homeless teenager in Texas, and activists harnessed her case to bring attention to abortion restrictions in the United States.

Sweeney showed McCorvey’s confession to multiple pro-life and pro-abortion friends, the Daily Beast reported, moments which are also included in the documentary.

The documentary also features Rev. Rob Schenck, who formerly participated in pro-life activities with Operation Rescue. He has since condemned his involvement with that group, along with his former “Reagan-Republican religion,” and has said that if Roe v. Wade were to be overturned now, there would be “chaos and pain.” 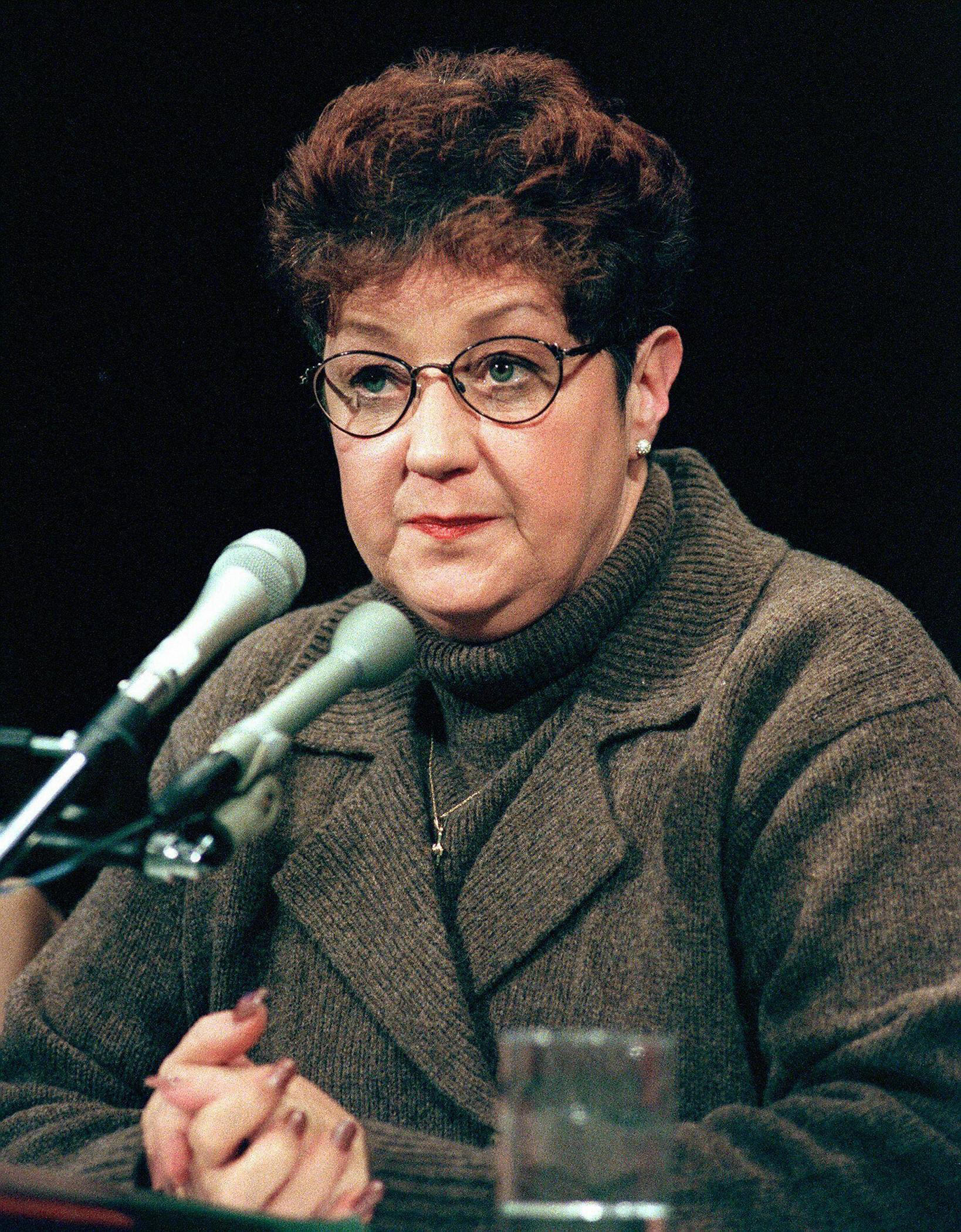 TO GO WITH AFP STORY US-COURTS-ABORTION by Fanny Carrier (FILES) This 21 January, 1998, file photo shows Norma McCorvey, the woman at the center of the US Supreme Court ruling on abortion, as she testifies before a US Senate Judiciary Committee subcommittee during hearings on the 25th anniversary of Roe v. Wade on Capitol Hill in Washington, DC. (Photo credit CHRIS KLEPONIS/AFP via Getty Images)

“I had never heard her say anything like this…But I knew what we were doing,” Schenck said in the documentary. “And there were times when I was sure she knew. And I wondered, ‘Is she playing us?’ What I didn’t have the guts to say was, ‘because I know damn well we’re playing her.’”

I was conflicted about appearing in this film, but I’m sure glad I did. You’ll see me express deep regret for how movement leaders like me treated Norma McCorvey “Jane Roe” of Roe v Wade. Please watch: AKA Jane Roe | Official Trailer [HD] | FX https://t.co/I0XCoKzNzB via @YouTube pic.twitter.com/x8BFXbK8cE

Schenck said in the documentary that “at a few points, she was actually on the payroll, as it were.” The documentary purports to show documents proving McCorvey was paid $456,911 in “benevolent gifts.”

Following news of the documentary, some who knew McCorvey during her lifetime said she did not put on a pro-life act.

Operation Rescue President Troy Newman scoffed at the idea that McCorvey was putting on an act, telling the DCNF in a phone interview that such reports are “classic fake news.”

“I knew Norma for 23 years, and she spent more time fighting against abortion than she did in favor of it,” Newman said, adding that though he has not seen the full documentary, he views what he has seen as attempts to take advantage of “a very sick woman.”

The Operation Rescue founder emphasized the importance of watching the documentary in its entirety to understand what McCorvey meant and what the producers intended with it.

“The producers of this film obviously have an agenda,” Newman added. “And so, you know, I think you have to view the so-called documentary in that light.”

“It’s an election year,” he added. “Everything is political.”

“#NormaMcCorvey was my friend,” tweeted Janet Morana, co-founder of the Silent No More Awareness Campaign and executive director of Priests for Life.

Morana links to a story she wrote about McCorvey following the woman’s death, and said: “She was not paid to be #prolife – how some documentary filmmakers got her to say so is suspicious, at the very least.”

“So #abortion supporters are claiming Norma McCorvey, the Jane Roe of Roe v Wade, wasn’t sincere in her conversion,” tweeted Fr. Frank Pavone, the national director of Priests for Life. “I was her spiritual guide for 22 years, received her into the #Catholic Church, kept regular contact, spoke (with) her the day she died, & conducted her funeral.”

“Norma McCorvey went through pain and difficult healing of the wounds her initial support of the #abortion cause brought her,” Pavone said.  “I guided her through that and it was a journey more private than public, and one you cannot fake.”

BREAKING LIVE!!!! Norma McCorvey DID NOT put on an ACT. https://t.co/aUZmgEf7sM

Morana and Pavone did not yet respond to requests for comment from the DCNF.

“I wonder how many abortions Donald Trump is responsible for,” McCorvey said in the documentary. “I’m sure he’s lost count, if he can count that high.”

“If a young woman wants to have an abortion—fine,” McCorvey said. “That’s no skin off my ass. You know, that’s why they call it ‘choice.’ It’s your choice.”