YouTube defended its removal of a video of a prominent epidemiologist explaining his view on coronavirus and “herd immunity.”

The video featured Dr. Knut Wittkowski, the former head of biostatistics, epidemiology and research design at Rockefeller University. In it, he was critical of lockdown and social distancing measures, arguing they are counterproductive to achieving “herd immunity” from the virus. The vide was removed for purported “misinformation” after reaching over 1.3 million views.

“With all respiratory diseases, the only thing that stops the disease is herd immunity,” Wittkowski said in the video, according to the New York Post, which first reported the story on Saturday. “About 80% of the people need to have had contact with the virus, and the majority of them won’t even have recognized that they were infected.”

Responding to the Daily Caller’s request for comment on the video’s removal, YouTube spokesperson Ivy Choi said in a statement:

We quickly remove flagged content that violates our Community Guidelines, including content that explicitly disputes the efficacy of global or local health authority recommended guidance on social distancing that may lead others to act against that guidance. We are committed to continue providing timely and helpful information at this critical time. 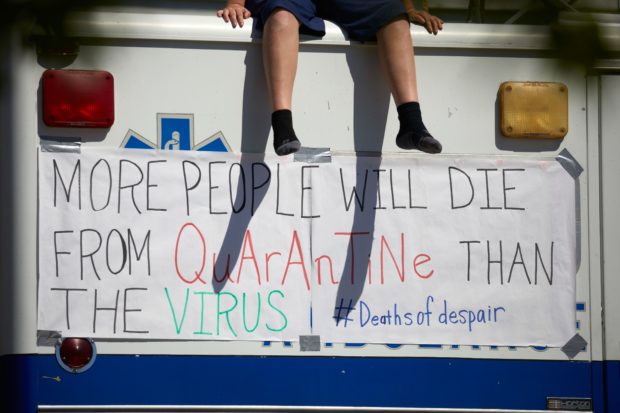 YouTube came under fire in April from Fox News host Tucker Carlson and others after the company removed a video by Drs. Dan Erickson and Artin Massihi criticizing California’s lockdown measures. The video had reached 5 million views. (RELATED: Tucker: WHO ‘Admitting’ Sweden’s ‘Model’ Is Working But US Policy Makers Won’t ‘Abandon A Sweeping Power Grab’)

“When this is all over, it’s likely we’ll look back on this moment, what YouTube just did, as a turning point in the way we live in this country, a sharp break with 250 years of law and custom,” Carlson, a co-founder of the Daily Caller, said in an April “Tucker Carlson Tonight” monologue. “The doctor’s video was produced by a local television channel. It was, in fact a mainstream news story. The only justification for taking it down was that the physicians on-screen had reached different conclusions than the people currently in charge.”

Other scientists, notably Dr. Scott Atlas, former chief of neuroradiology at Stanford University Medical Center and a senior fellow at Stanford’s Hoover Institution, have made cases for “herd immunity” as a viable way to end the coronavirus threat.