Movie theater and bowling alley owner Rick Novak has a message for the governor of Virginia: He isn’t planning on waiting much longer to reopen his businesses.

The Front Royal, Virginia, business owner operates Royal Cinemas and the Royal Family Bowling Center, businesses that shut down in March with Democratic Virginia Gov. Ralph Northam’s social distancing orders. Novak told the Daily Caller News Foundation he was more than happy to comply with the temporary restrictions at first.

“Initially we just shut our doors thinking that we were going to go for two weeks or so because that’s what we were asked to do,” he said.

But he had no idea the restrictions would drag on for months, losing him hundreds of thousands of dollars.

Social distancing restrictions have cost him “$130,000 bowling center plus $116,000 theater, or $246,000 together and counting every day,” he said. “Memorial Day weekend is usually a big three-day holiday weekend. Not this year.”

Royal Cinemas has served the Front Royal community since Novak first opened his business in 1994, offering patrons a chance to see the latest movies for prices as low as $7.

“Located in historic downtown Front Royal and nestled in the Shenandoah Valley, we have a friendly staff, delicious, freshly popped popcorn, ice cold beverages, and a huge candy assortment to choose from,” according to the movie theater’s website. “We maintain a family atmosphere and obtain first run movies to be enjoyed by all ages.”

“In September, it will be 26 years for the theater,” Novak said. “And this June, it’ll be 18 years at the bowling alley.” (RELATED: ‘Really, Really Frustrating’: NoVA Gym Owners Feel The Pain Of Delayed Reopening)

Novak began posting messages to the Front Royal community using the sign at his bowling alley and the marquee at his movie theater. Initially, his messages were ones of hope: “We will get through this together and apart” and “Let’s hope this bowls over soon.”

But as days and then weeks began to roll by and Northam delayed opening Virginia, Novak switched to posting about the monetary losses his businesses were experiencing.

His most recent sign has a direct message for Northam: “Time is running out Ralph Northam. We need to open or be closed forever. $105K in lost revenue since COVID 19 closure.” 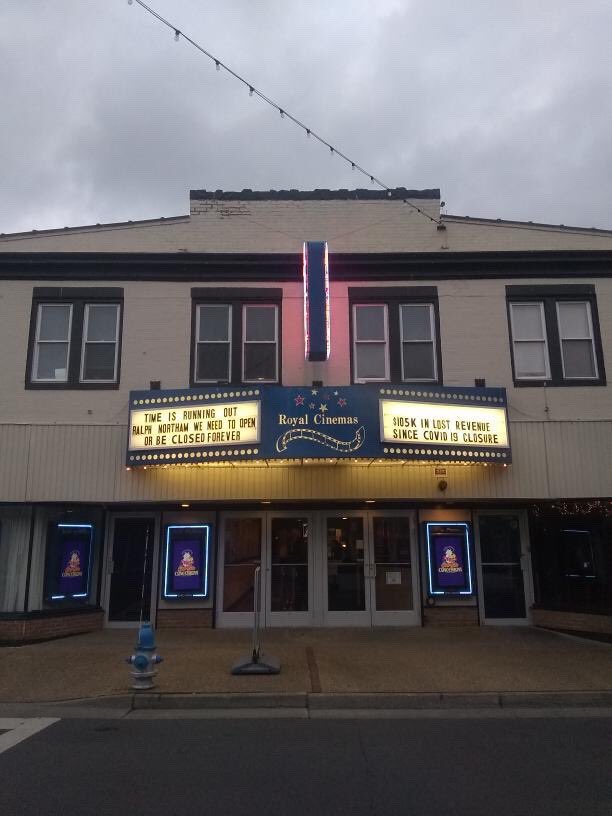 The messages are meant to inform businesses in Front Royal and throughout the United States “what is happening right now to all small businesses,” Novak continued.

He has updated the movie theater marquee to show that his business has lost $116,000 as of Tuesday night.

“Of course that will likely continue to grow as we reopen due to reduced attendance and social distancing measures reducing revenue potential,” he added. “As well as no national releases until July 17 with Christopher Nolan’s ‘Tenet’ and on July 24 ‘Mulan.'” 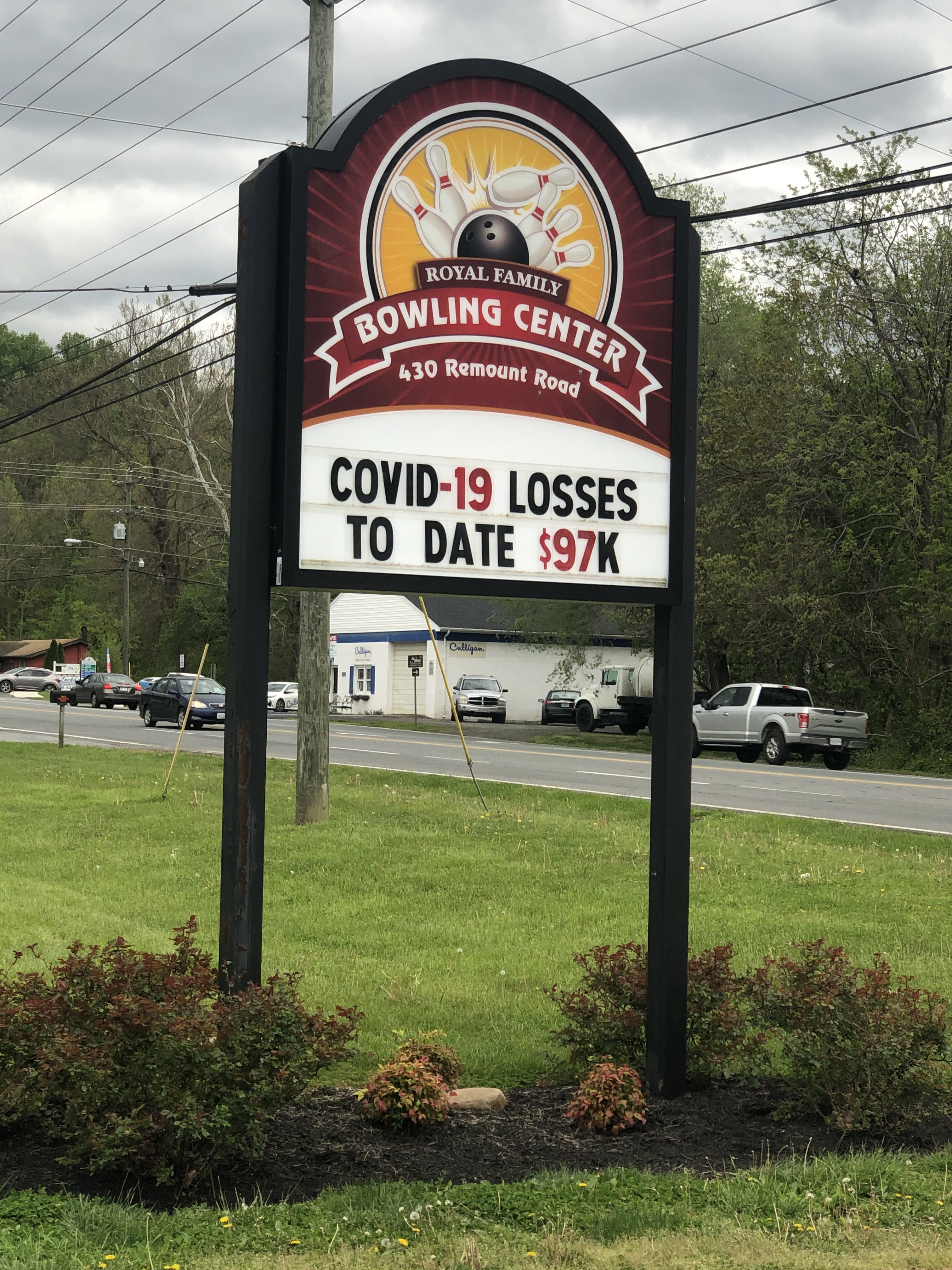 Lawmakers need to have faith that business owners can protect their customers and do business at the same time, Novak said. He said he believes Northam does care about Virginia’s small businesses — but that Northam does not understand what is going on “because he’s insulated from it.”

“I think there’s a perception that theaters are packed all the time,” Novak said with a laugh. “Unfortunately, that is not the case. Most of the time theaters are not packed. And so I have no problem with 50% occupancy or something like that, if they come up with that going forward.”

But if Northam continues to delay opening the state, Novak said he will reopen his doors. (RELATED: ‘Get Me Off Of House Arrest’: Pastors Call On Barr, DOJ To Protect Religious Liberty)

“Hopefully he will do that and hopefully we will enter into a phase two soon,” the owner said. “I’m only going to wait so long at the theater and the bowling alley, and then we’re going to reopen because that’s the right thing to do.”

The first week of June is his “drop-dead date” for how long Novak said he will wait to open.

“Hopefully the governor and I will agree,” he said. “Maybe he’ll make it so we can reopen the weekend after Memorial Day — that will be even better.”

The Warren County Department of Health reported that as of Wednesday, there were 105 confirmed cases of COVID-19 in its limits, where the town of Front Royal is located. 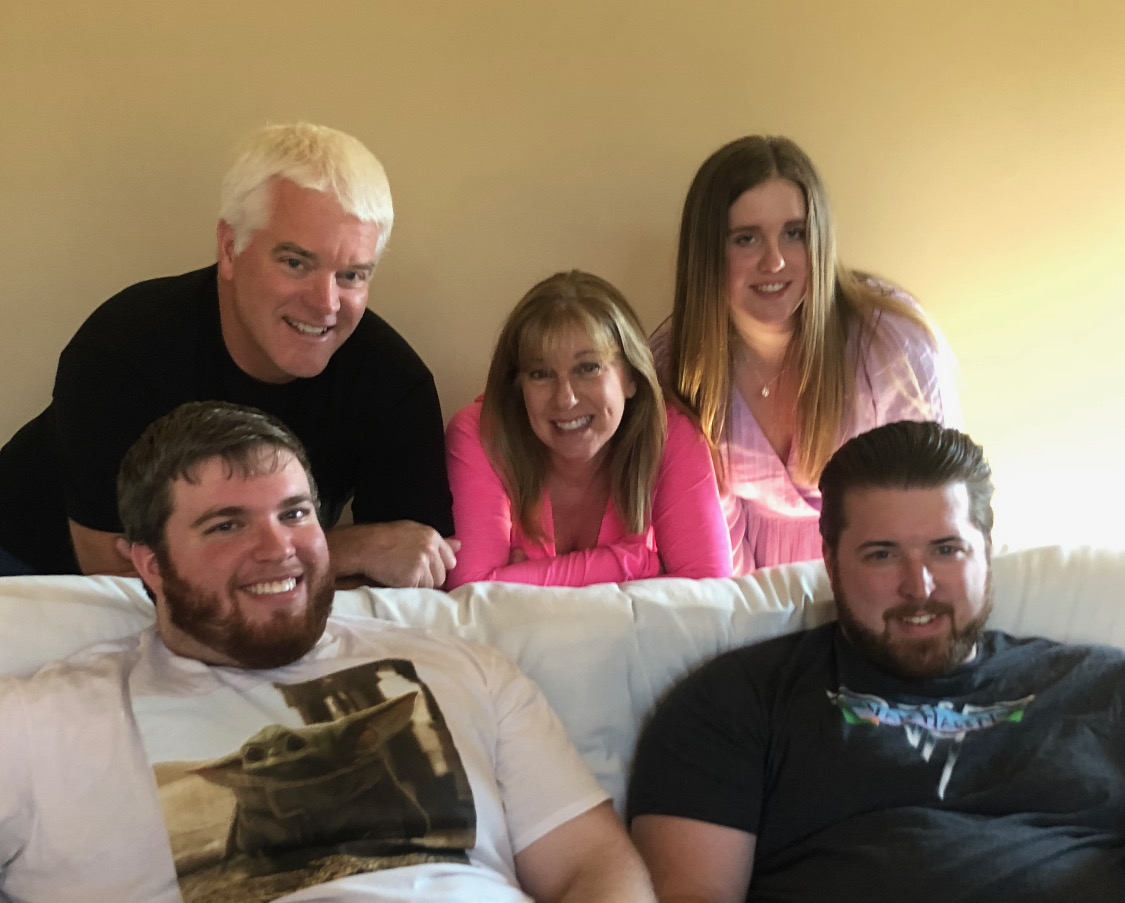 The closures have garnered social media support from the Front Royal community, Novak said, particularly after he put the message to Northam on the marquee. Encouraged by the support, Novak implemented “Curbside Concessions,” selling the movie theater’s concessions outside the theater on the street.

“We had a tremendous first weekend,” he said. The concessions are open every night from 5:30 to 8:30 p.m. “We get to stay in touch with our customers, kind of tell them what we think is going to happen in the theater industry. Nothing is certain yet.”

“So that’s been really nice,” he said. “Really, really nice to have those people support us in that way.”

Both his businesses have continued to pay regular wages to employees, Novak said. The business owner noted that a few weeks ago, he received coronavirus stimulus funding from the federal government, which he is grateful for. The town of Front Royal is considering offering support to local businesses using surplus funds of its own, Novak added.

“I don’t think the people that are making decisions really understand the industry they’re deciding about,” he said. “And I think they should consult, and figure out, ‘Well, how can we get this done safely?’ rather than just say, ‘You should be closed.'”

Northam did not respond to multiple requests for comment from the DCNF.