Ali Khamenei, the supreme leader of the Islamic Republic of Iran, published a poster on Tuesday that reads “Palestine will be free. The final solution: Resistance until referendum.” Khamenei’s office released the image to celebrate Quds Day, an annual rally in Iran that calls for the destruction of Israel, according to The Jerusalem Post.

The poster — which was displayed in English, Arabic and Farsi — depicts a conquered Jerusalem alongside the late Islamic Revolutionary Guards Corp Quds Force leader Qasem Soleimani, who was killed earlier in 2020 by a U.S. missile strike.

The United States and the European Union classified Soleimani as a top international terrorist, responsible for the death of hundreds of U.S. military personnel. 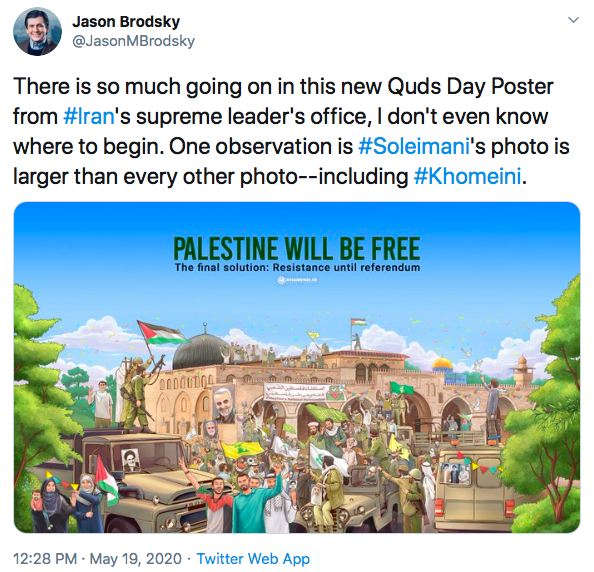 The “final solution” was a genocidal plan by Nazi Germany to eliminate the Jewish population during World War II. Through the Holocaust, Adolf Hitler succeeded in killing millions of Jewish people before the Allied powers overtook his military forces in 1945 and brought an end to the massacre.

“While suppressing their own people, the Mullah regime in Tehran is proclaiming freedom for the Palestinians in order to continue the path to destroy the Jewish state,” Uwe Becker, the president of the pro-Israel NGO The German-Israel Friendship Society, told The Jerusalem Post.

“As long as Tehran is denying the right of existence of Israel — and as long as they are continuing to attack directly or indirectly Israeli families — the EU should freeze the relations with the Iranian regime,” Becker continued. “No pillars of relations should stand on poisoned ground. The Iranian regime is constantly fighting against the State of Israel and its existence.” (RELATED: Here’s What Extremist Groups Are Up To During The Coronavirus Pandemic)

The Islamic Republican of Iran, led by Khamenei, has long sought the annihilation of Israel, and the Quds Day poster is the latest anti-Semitic action by Iran’s government.

As recently as April, the Iranian Health Ministry launched a coronavirus cartoon contest, accepting thousands of entrants across the world. A common theme existed among many of the submissions, with many cartoons depicting Jewish people and Americans causing the virus.