Prince William revealed how he put his love of classical music to use after helping put a “few pieces” together for Prince William and Kate Middleton’s wedding in 2011.

“I love trying to organize some interesting, I hope, pieces of music for certain occasions…particularly for weddings if people want,” the Prince of Wales shared in an interview with Alan Titchmarsh on Classic FM. The comments were noted by People magazine in a piece published Tuesday. (RELATED: REPORT: Coachella Potentially Rescheduled To October Due To Coronavirus Fears)

“I know my eldest son [Prince William] was quite understanding and was perfectly happy for me to suggest a few pieces for their wedding,” he added. (RELATED: Here Are The Members Of Congress Self-Quarantining After Meeting Person With Coronavirus At CPAC) 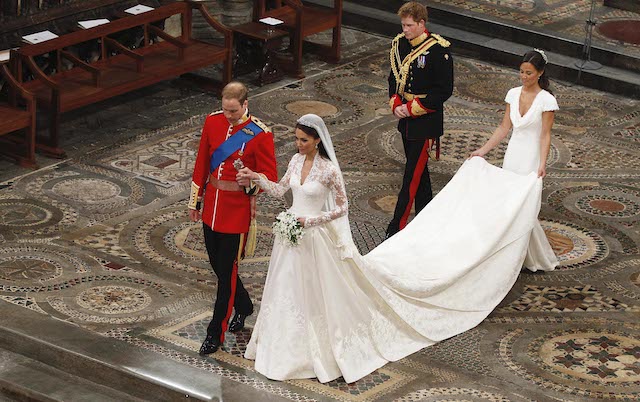 Prince William takes the hand of his bride Catherine Middleton, now to be known as Catherine, Duchess of Cambridge… (Photo by Kirsty Wigglesworth – WPA Pool/Getty Images)

Queen Elizabeth II’s son continued, while noting how he hoped “that gave some people pleasure, but it’s rather fun having orchestras in for great occasions like that, and why not suggest a few pieces occasionally?”

When guests arrived to the Duke and Duchess of Cambridge‘s royal nuptials they were greeted at Westminster Abbey to organ music by Johann Sebastian Bach and other orchestral pieces by the likes of Edward Elgar and many more.

According to a report by The Spruce:

The couple chose “Farewell to Stromness,” “Touch Her Soft Lips and Part” and “Romance for String Orchestra Op. 11” as a nod to Prince Charles and Camilla, Duchess of Cornwall, as the songs were played at their 2005 wedding.

At one point, the Prince of Wales also revealed that it was during a trip with his grandmother, Queen Elizabeth, to Covent Garden to see the Bolshoi Ballet perform when he was just 7 that he found a love for classical pieces.

“I was completely inspired by it,” Prince Charles shared. “Which is why it’s so important, I think, for grandparents or other relations to take children at about the age of 7 to experience some form of the arts in performance.”

1
1 Day After Mocking 'Right-Wing' Media For Reporting On Crime, CNN's Cuomo Admits Homicides Are Rising — But Here's Where He Placed The Blame
Media
2
The Side Of Kayleigh McEnany The Media Won’t Tell You About
Politics
3
'You Can Take Your Mask Mandate And Shove It Right Up Your Ass': Dan Bongino Vows To Defy Mask Order
Media
4
Millions In Coronavirus Relief Loans Went To Chinese Real Estate Company At Center Of FBI Bribery Probe
US
5
Joy Reid Is MSNBC's New Primetime Host. Here Are 7 Times She Spread Left-Wing Conspiracy Theories And Misinformation
Politics