The report, which is still live on Politico’s website, cites “two people familiar with the matter” who claim that “Grenell will take a senior role inside the Trump campaign, where he will be involved in fundraising and strategy.”

“Fake news. Do you even check before writing?” Grenell asked. “What has happened to Washington DC media?!”

Why isn’t @Twitter fact checking Politico? This story is wrong. She was told it’s wrong and yet she keeps it up. https://t.co/JbzkBovPU4 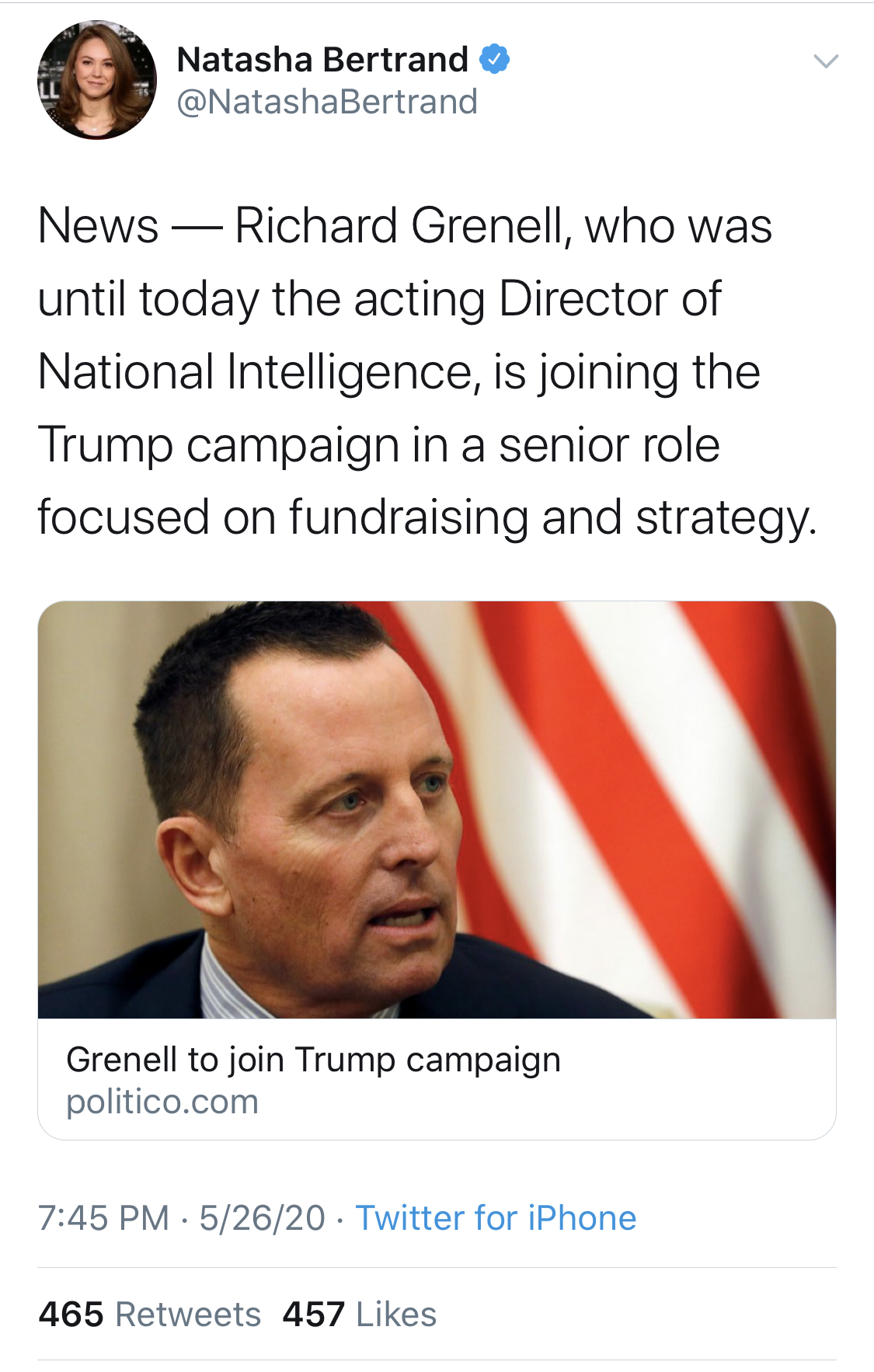 Although Bertrand deleted her tweet, Politico has stood by its reporting. Brad Dayspring, Politico’s vice president of marketing & communications, tweeted at Grenell alleging that the publication had “reached out to” Grenell “several times prior to publishing.” Dayspring added that ” multiple high-level sources” had “confirmed the story.”

“You didn’t respond,” Dayspring wrote. “We welcome your comment and encourage you to point out, on record, what specific facts you believe to be incorrect.” (RELATED: Politico Quietly Updates Article After Claiming Trump Currently ‘Owes’ Millions To Bank Of China)

In response, Grenell pointed out that Politico was standing by its reporting despite both himself and the Trump campaign denying the article. Grenell called Dayspring’s response “scary” and tweeted that he sounds “ridiculous.”

Brad Parscale, the campaign manager for Trump’s 2020 presidential campaign, denied that Grenell would be joining the team as well.

“Here is more proof of #FakeNews,” Parscale tweeted Tuesday. “I like @RichardGrenell and we are friends but this story isn’t true. Just more garbage of people making sensational claims.”

The entire story isn’t true. And your response is scary – you don’t believe the campaign denial nor mine. But claim you have some anonymous source. Do you realize how ridiculous you sound? https://t.co/RAgx2Q35rh

Dayspring asked Grenell to “state *SPECIFICALLY* what” was “untrue” about Politico’s report. He asked point-blank if Grenell’s next job would be for the Trump campaign. Grenell responded “No” and asked the publication again to “delete the story.”

Despite Grenell’s request that Politico delete its article, the publication has yet to do so. Politico appeared to update its article to include Grenell’s denial but did not issue an editor’s note, correction or clarification to indicate that its article was disputed by multiple individuals on the record.

Politico’s report still claims in its headline and body – save for one paragraph noting his and Parscale’s denial – that Grenell will be taking a role on the campaign.

“Prior to publishing, multiple attempts were made to reach Mr. Grenell and the Trump campaign for comment,” a Politico spokesperson told the Daily Caller. “There was no response. The story has been updated to include the tweets from both Mr. Grenell and Mr. Parscale. We stand by the story.”