Former Deputy Attorney General Rod Rosenstein, who appointed a special counsel to oversee the Trump-Russia probe, will testify before the Senate Judiciary Committee on June 3, the panel announced Wednesday.

The open hearing will be the first to be held as part of the committee’s sweeping review of the FBI’s investigation and surveillance of the Trump campaign.

Sen. Lindsey Graham has set a vote for June 4 to subpoena dozens of current and former government officials involved in various aspects of the investigation.

Rosenstein, who left the Justice Department on May 11, 2019, played a key role in several aspects of the investigation that have come under Republican scrutiny.

He appointed Robert Mueller to serve as special counsel on May 17, 2017. On June 29, 2017, Rosenstein signed the fourth and final application for a Foreign Intelligence Surveillance Act (FISA) order against Carter Page, a former Trump campaign aide. (RELATED: Jim Jordan: Rosenstein, Sessions ‘Need To Be Held Accountable’)

The application relied heavily on unverified allegations from the infamous Steele dossier, which claimed that Page and other Trump campaign advisers conspired with the Russian government to influence the 2016 election. 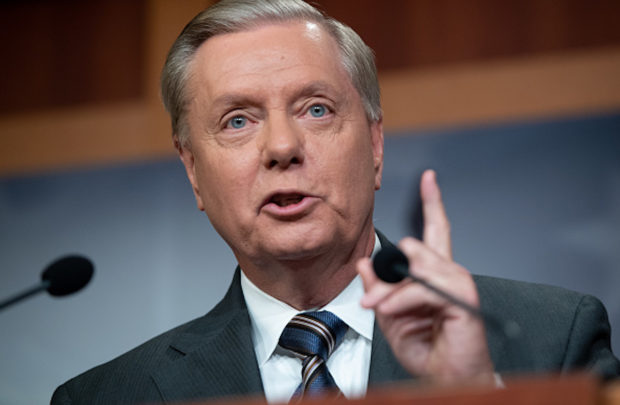 US Senator Lindsey Graham, Republican of South Carolina, speaks about sanctions against Turkey at the US Capitol in Washington, DC, October 17, 2019. (Photo by SAUL LOEB/AFP via Getty Images)

The FBI and Justice Department were aware well before Rosenstein signed the FISA order of significant problems with the dossier.

The Justice Department deemed the final two FISA orders — including the one signed by Rosenstein — to be invalid because of the FBI’s omissions.

Rosenstein fought the White House and Republicans in Congress over the release of documents regarding the FISA applications and the Steele dossier.

Rosenstein is likely to face questions over his role in appointing the special counsel and overseeing the probe. He is also likely to be asked about claims from former FBI Deputy Director Andrew McCabe that he offered to wear a wire during meetings with President Donald Trump.

Rosenstein said in a statement that he is “grateful” to be invited to testify before the Senate panel “about information that had come to light concerning the Foreign Intelligence Surveillance Act process and the FBI’s counterintelligence decision-making.”

He added that “even the best law enforcement officers make mistakes, and that some engage in willful misconduct.”