Google is in hot water after allegedly violating Arizona’s consumer protection laws by recording smartphone users’ location data even after they explicitly requested it not be recorded.

Arizona Republican Attorney General Mark Brnovich began investigating Google in 2018 after an Associated Press investigation found that many Google services on Android and iPhone devices store users’ location data even when they used a privacy setting meant to prevent Google from doing so.

Tracking such data merits privacy concerns. For this reason, the company lets users decide whether or not they wish for their data to be tracked.

Google’s support page on the matter states that when location data is turned off, “new location information is no longer saved to your location history.” (RELATED: Google Is Launching A Tool To Help Government Officials Track People’s Movements Amid Virus Pandemic)

A redacted public filing from the Arizona Attorney General’s office indicated the probe stemmed from an unnamed company’s “storage of consumer location data, tracking of consumer location, and other consumer tracking through … smartphone operating systems, even when consumers turn off ‘location services’ and take other steps to stop such tracking.” 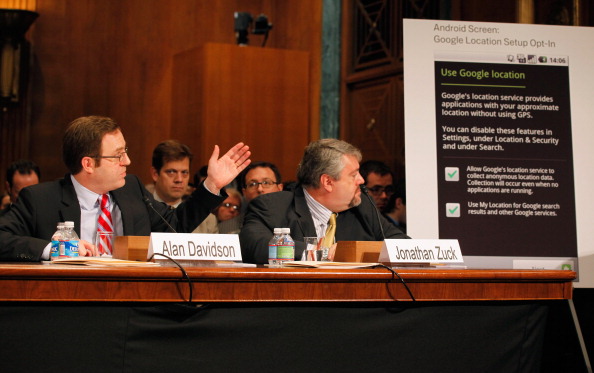 WASHINGTON, D.C. – MAY 10, 2011: Google Director of Public Policy for the Americas Alan Davidson (L) gestures toward a poster of a privacy setting screen presented to Android users. (Photo by Chip Somodevilla/Getty Images)

The suit is the latest in a number of legal cases brought against Google by numerous state attorneys general over concerns “they undermine rivals and harm consumers,” according to the Washington Post.

Google spokesperson Joe Castaneda defended the company’s privacy practices in a statement, according to the Washington Post, claiming the state’s lawsuit mischaracterizes their services.

“We have always built privacy features into our products and provided robust controls for location data. We look forward to setting the record straight,” he said.

The redacted document from Brnovich’s office appears to include additional instances in which Google may be misleading customers, reports the Washington Post. These reportedly include changing the default tracking settings without obtaining consent from or informing the user and making privacy menus hard to find.

In the lawsuit, Brnovich is reportedly seeking that the court require Google to pay back dishonestly made profits from what Arizona contends is the company’s “seemingly relentless drive” to use location data to deliver targeted ads to Arizona consumers who have not consented to such tracking.

Arizona is seeking up to $10,000 per violation, possibly totaling hundreds of millions of dollars, Brnovich told the Post.