Commenting on the ongoing protests, riots and general lawlessness taking place in the wake of the death of George Floyd in Minneapolis last week, Carlson used part of Monday night’s “Tucker Carlson Tonight” opening monologue to take aim at “key advisers,” including Kushner, who don’t understand the “gravity of the moment.”

After bringing up the weekend assault of Fox News reporter Leland Vittert and his camera crew near White House grounds, Carlson asked, “If you can’t keep a Fox News correspondent from getting attacked directly across the street from your house, how can you protect my family? How are you going to protect the country? How hard are you trying?”

Carlson criticized Trump for seeming to be “aware only of himself” when commenting on Twitter the next morning.

“The first requirement of leadership is that you watch over the people in your care,” Carlson said. “That’s what soldiers want from their officers. It’s what families need from their fathers. It’s what voters demand from their presidents.”

The Fox News host argued that voters “will put up with almost anything if you do that.”

“You can regularly say embarrassing things on television,” he said. “You can hire Omarosa to work at the White House. All of that will be forgiven if you protect your people. But if you do not protect them — or, worse than that, if you seem like you can’t be bothered to protect them — then you’re done. It’s over. People will not forgive weakness. That’s the one thing. By the way, that is not a partisan point. It is human nature.”

Calling Trump’s response to the riots “the singular test of his presidency,” Carlson drew hope from the president’s Monday announcement use federal resources to stop the riots.

“We fervently hope this all works,” he said. “What Americans want most right now is an end to this chaos. They want their cities to be safe. They want this to stop, immediately. If the commander-in-chief cannot stop it, he will lose in November. The left will blame him for the atrocities they encouraged and some voters will agree. Donald Trump is the president. Presidents save countries. That’s their job. That’s why we hire them.” 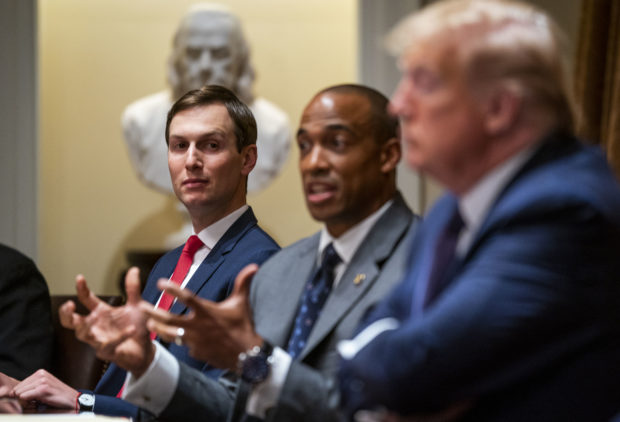 WASHINGTON, DC – MAY 18: Senior adviser Jared Kushner and U.S. President Donald Trump listen as Executive Director of the White House Opportunity and Revitalization Council Scott Turner speaks during a meeting in the Cabinet Room of the White House May 18, 2020 in Washington, DC. (Photo by Doug Mills/The New York Times-Pool/Getty Images)

Yet, Carlson contended, “some key advisers around the president don’t seem to understand this or the gravity of the moment” and believe Trump’s voters “aren’t going anywhere.”

“Jared Kushner, for one, has made that point out loud,” he said. “No one has more contempt for Donald Trump’s voters than Jared Kushner does, and no one expresses it more frequently. In 2016, Donald Trump ran as a law and order candidate because he meant it, and his views remain fundamentally unchanged today. But the president’s famously sharp instincts, the ones that won him the presidency almost four years ago, have been since subverted at every level by Jared Kushner. This is true on immigration, on foreign policy and especially on law enforcement.” (RELATED: ‘1619 Project’ Author Defends Looting As A ‘Symbolic Taking’)

Carlson cited Kushner’s support for the “reckless” prison reform bill as one example of the president “being led in the wrong direction.”

“He often derides Kushner as a liberal,” Carlson said. “And that’s correct, Kushner is. But Kushner has convinced the president that throwing open the prisons is the key to winning African American votes in the fall and that those votes are essential to his reelection.”

Though Trump’s instincts seem to have been to “crack down on rioters,” Carlson speculated that the president has “been talked out of it by Jared Kushner and by aides that Kushner has hired and controls.”

“Kushner’s assumption, apparently, is that African American voters like looting,” he concluded. “That is wrong. Normal Americans of all colors hate looting. Obviously. Why wouldn’t they hate looting? They’re decent people.”