Amazon, Twitter, and other major tech companies are facing intense criticism on antitrust issues and censorship claims in the months since government officials reportedly began asking for help from Silicon Valley on ways to tackle the coronavirus pandemic.

The president and lawmakers have turned their sights on Twitter and Amazon, respectively, while Texas Attorney General Ken Paxton and other attorneys general are reportedly ratcheting up their antitrust investigation targeting Google’s business model. The White House asked them in March to fight coronavirus disinformation while also assisting the government in its virus response.

Amazon tried to stop sellers from drastically raising prices on hand sanitizers as Google fleshed out ways of tracking the virus. Twitter and Facebook developed policies designed around nixing virus-related misinformation while providing users with accurate information about coronavirus, or COVID-19.

COVID-19 has so far killed a reported 110,000 people in the U.S. and led several states to enact lockdowns to slow the spread. States and local officials have begun easing up on stay-at-home orders, which resulted in double-digit unemployment rates, and deaths in the U.S. from the virus are reportedly slowing down, even though hot spots are emerging.

Here are some of the problems Silicon Valley giants are facing as citizens and government officials focus on other priorities. (RELATED: EXCLUSIVE: Louisiana AG Jeff Landry Says He’s Focusing On COVID-19 Response, Declines To Reveal Future Of Google Probe)

A bipartisan group of 50 attorneys general across 48 states, the District of Columbia and Puerto Rico, began probing Google in September well before the coronavirus pandemic began.

Reports from The Wall Street Journal in May 2020 and CNBC Friday suggest the Department of Justice and Paxton are well into the planning stages of litigation targeting Google, but those reports rely on unnamed “people familiar with the matter” and do not explicitly state when to expect a lawsuit. The DOJ and state attorneys general are collaborating on the probes.

The bulk of the attorneys general’s investigation has been focused on Google’s online advertising, as the company owns the largest and most powerful tool in the link between online publishers and advertisers, according to the WSJ report. The DOJ has reportedly homed in on the tech titan’s ad technology while also focusing more broadly on concerns that Google is stifling competition through its search business.

DOJ’s investigation could end soon, according to the WSJ’s May report.

Other reports suggest the DOJ and state attorneys general are soliciting advice from one of Google’s competitors, search engine DuckDuckGo.

The Daily Caller News Foundation reached out to several Republican attorneys general involved in the probe, including Mark Brnovich of Arizona, Leslie Rutledge of Arkansas, Jeff Landry of Louisiana, Sean Reyes of Utah, and Doug Peterson of Nebraska, but none of them have responded to repeated requests for comment about a potential lawsuit.

Florida AG Ashley Moody’s spokeswoman Lauren Cassedy told the DCNF that, “it would not be appropriate to comment (about a lawsuit) at this time.”

Pressure on Google  eased somewhat after the company lent government officials access to some of the company’s technology in pursuit of tackling the coronavirus pandemic.

The company CEO Sundar Pichai announced in a March 6 blog post that it would develop a system helping medical researchers understand “how the virus functions and experimental work in developing future treatments.”

Google did not responded to the DCNF’s request for comment about whether the company is preparing for a lawsuit, and the DOJ has not confirmed to the DCNF that a lawsuit is forthcoming.

House Antitrust Subcommittee Chairman Rep. David Cicilline said in May that he wants Amazon CEO Jeff Bezos to testify as part of his committee’s antitrust investigation into the company. Amazon is facing a DOJ antitrust probe as well, which is unrelated to the state attorneys general probe into Google.

“It is our hope and expectation that [Bezos] will come voluntarily,” the Rhode Island Democrat said in a May 7 interview with Politico. “But if he elects not to do it voluntarily then we are prepared to use compulsory process to compel his attendance.” (RELATED: ‘No One Is Above The Law’: Democrat Repeats Subpoena Threat To Bezos) 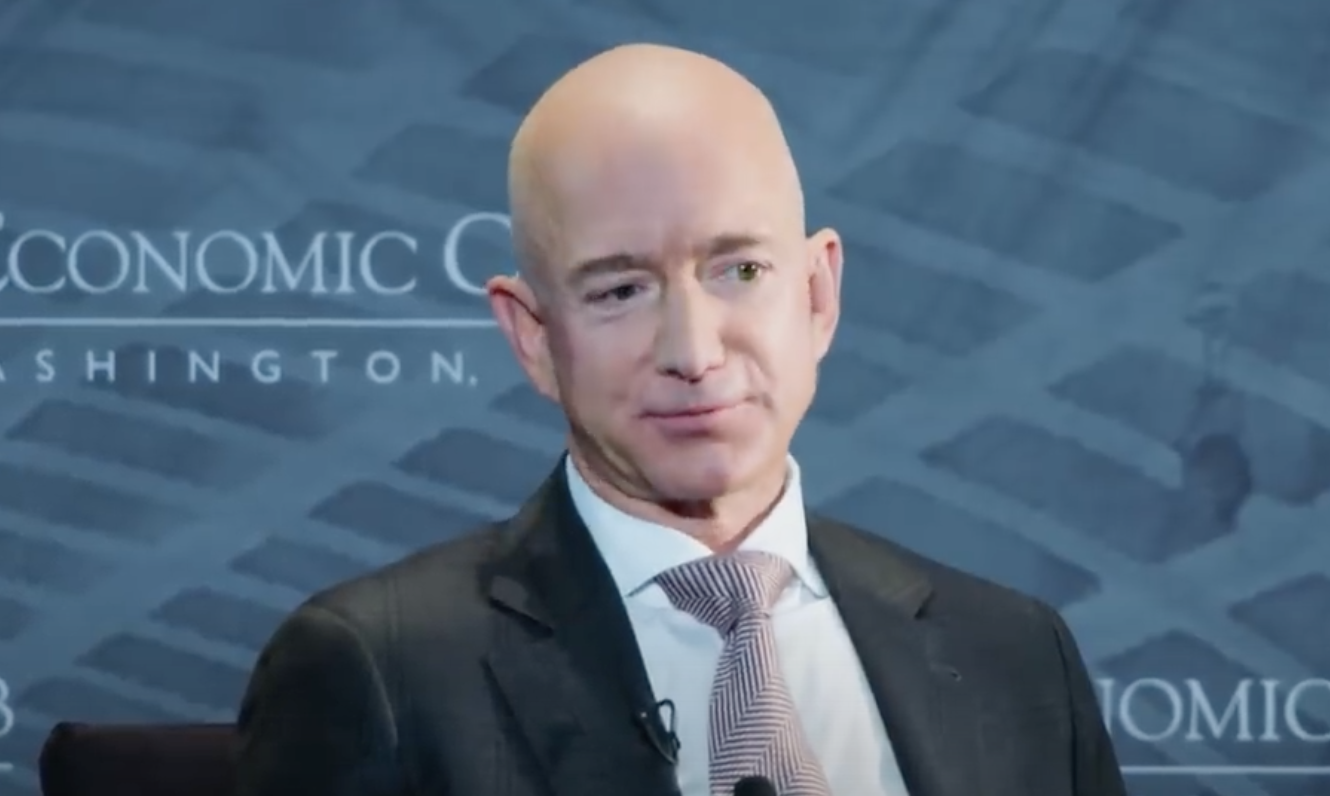 Cicilline’s comments came after House Judiciary Committee lawmakers threatened to subpoena Bezos on May 1, after the Wall Street Journal reported in April that the company used data from independent sellers to develop competing products. The House panel is engaged in an antitrust investigation targeting Amazon and other major tech companies.

Amazon has not replied to the DCNF’s request for comment about whether Bezos will testify.

Meanwhile, the online shopping giant revenue rose 26% to $75.5 billion during the pandemic after economic lock downs all but shuttered many of the company’s brick-and-mortar competitors. The company announced in April that it would also hire an additional 75,000 people for jobs ranging from warehouse staff to delivery drivers.

President Donald Trump announced an executive order on May 28 calling for Twitter and other social media platforms to lose their protection from legal liability if they engage in censorship. The president and other conservatives frequently claim that Twitter is biased against them and often censors their content for political reasons.

The company also concealed a May 29 tweet from Trump in which he suggested that the “THUGS” rioting in Minneapolis are “dishonoring the memory of George Floyd,” a black man who died after a police officer knelt on his neck for several minutes, video of the incident shows.

….These THUGS are dishonoring the memory of George Floyd, and I won’t let that happen. Just spoke to Governor Tim Walz and told him that the Military is with him all the way. Any difficulty and we will assume control but, when the looting starts, the shooting starts. Thank you!

Twitter argued that the historical relevance of the term “looting starts, shooting starts” violated the company’s policy against inciting violence.

In 1967, Miami police Chief Walter Headley used the phrase during hearings about crime in the Florida city, according to NPR. Headley preferred using dogs and shotguns, among other tough tactics, to stamp down looting and violent protests, the Miami Herald reported May 29.

Trump, for his part, later clarified what the tweet was meant to convey, telling his Twitter followers May 29 that looting often leads to gun violence, something the president said he hoped to avoid.

Facebook announced a plan Sept. 17 , 2019 to create an oversight board designed to remove the politics from moderating decisions. The company rolled out the plan a week after Paxton’s announced his intention to take on Google Sept. 9.

Facebook’s independent oversight is body meant to impartially protect free speech and create an arbitration system, Axios reported in May. CEO Mark Zuckerberg’s new board is made up of a bipartisan crew of conservative and liberal board members who will help judge whether specific comments, posts or links comply with Facebook’s terms of service.

The oversight board named 20 of the 40 expected board members during its May 6 rollout. Under this system, Facebook users who believe moderators unfairly targeted them can file an appeal with the board, which will choose to take a handful of cases each year, a setup which Zuckerberg has likened to the Supreme Court.

The 15-year-old social media giant hit some speed bumps over the past few weeks.

Some Facebook employees recently criticized Zuckerberg’s decision not to remove a Trump Facebook post mentioning the term “looting starts, shooting starts.” Many of the employees conducted a virtual walkout on June 1 to voice their displeasure. Facebook did not nix the post because the company prefers to lean on free speech principles, Zuckerberg explained during a company meeting on June 2.

Zuckerberg announced in a Facebook post Friday that the company will revisit some of its policies against violent threats.

“We’re going to review potential options for handling violating or partially-violating content aside from the binary leave-it-up or take-it-down decisions,” he wrote. “I know many of you think we should have labeled the President’s posts in some way last week.”