A woman claiming to be a field director for Democratic Virginia Sen. Mark Warner’s reelection campaign has repeatedly called for defunding the police on Twitter, a policy stance far outside anything Warner has officially endorsed.

The staffer, retired Marine Corps sergeant Tonya James, criticized Minneapolis Mayor Jacob Frey for participating in protests but being unwilling to defund the police, according to tweets sent from her account on Monday. Prior to working on Warner’s campaign, James worked as the South Carolina campaign director for Democratic Massachusetts Rep. Seth Moulton’s brief presidential run in 2019.

James locked her Twitter account shortly after this article was published, but screenshots of the tweets are still available for viewing.

“When you hear us say, love us like you love our culture this is what we mean. Mayor, you can’t come and do the cupid shuffle with us and then when you are asked to defund the police say no. That is not how any of this is going to work. Shuffle out the door,” James wrote in a tweet. (RELATED: ‘Act This Month’ — Joe Biden Calls On Congress To Fast-Track Police Reform Bill For Trump To Sign Into Law) 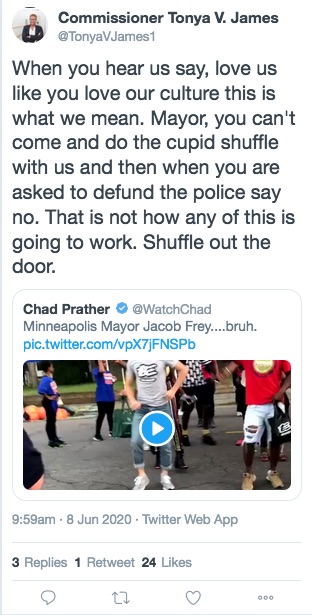 “Not really,” she wrote. “He loves our culture up until the point he was asked to defund the police and he said no. Nothing enduring[sic] about this guy.” 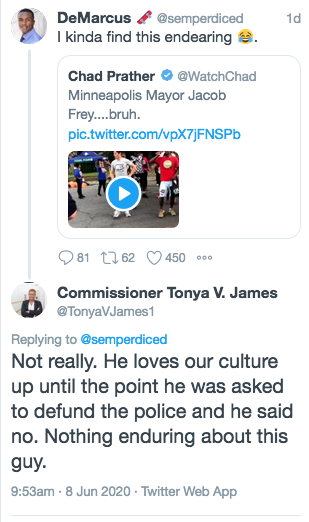 The slogan of defunding the police has gained steam amid protests against the death of George Floyd in Minnesota. (RELATED: DC Archbishop Rips Saint John Paul II National Shrine For Allowing Itself To Be ‘Manipulated’ Ahead Of Trump Visit)

James has a history of criticizing the police that predates the Floyd protests, however. She tweeted in December 2019 that it was impossible for police to be unbiased in their work. 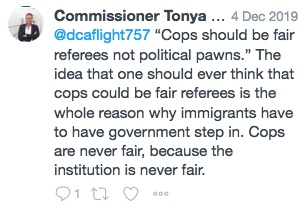 Warner’s office did not immediately respond to a request for comment, but the senator has made no public remarks in favor of defunding the police. He has criticized President Donald Trump for clearing out mostly peaceful protesters from Lafayette Square so the president and administration officials could the photographed at St. Johns church.

Warner is running as an incumbent against retired Army Lt. Col. Daniel Gade, an Iraq veteran who lost his right leg in combat overseas. Gade told the Daily Caller he is not in favor of defunding the police.

“It’s unfortunate and unforgivable that my opponent’s campaign would call for defunding the brave police departments that serve out communities and label these heroes as racist,” he said. “I served honorably for over 25 years in uniform and sacrificed greatly to serve my fellow man. My opponent’s comments are what career politicians say because it’s what their party bosses and DC lobbyists expect them to say.”

“Virginia’s service members, officers and citizens deserve better from their U.S. Senator,” Gade added. “I’m ready to send him packing and Virginia is ready to elect a servant as the Commonwealth’s next Senator.”