Following the death of George Floyd, there has been a growing movement in the Democratic Party to abolish the police.

Activist groups such as Black Lives Matter have made defunding the police a top priority, and the idea has gained traction within the Democratic Party establishment, having been endorsed by former Hillary Clinton spokesperson Brian Fallon. (RELATED: Dan Bongino To Testify At House Hearing On Police Brutality)

Camden, New Jersey, came closer than any city in modern American history to disbanding the police force, but still didn’t rid themselves of law enforcement. For years, Camden was one of the most crime-ridden cities in the U.S., before it laid off its entire police force in 2012 due to high crime rates, allegations of corruption and a union contract the city deemed too generous, according to NPR. Contrary to popular belief in some circles, Camden did not defund or abolish the police, but replaced their old police department with a new one. The old police department was revamped into the Camden County Metro Police, and crime in the city has taken a nosedive in the years since. 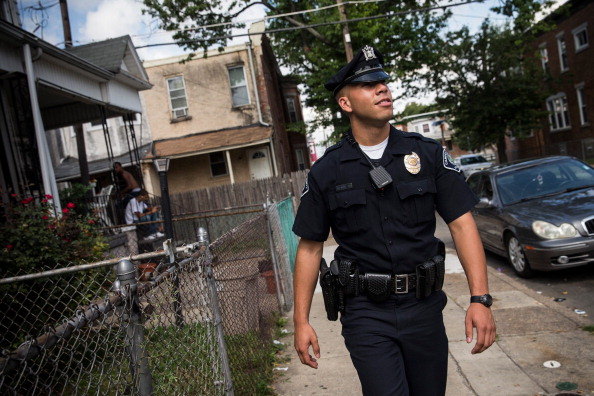 Officer Adam Fulmore, of the Camden County Police Department, goes on a foot patrol on August 22, 2013 in the Parkside neighborhood of Camden, New Jersey (Photo by Andrew Burton/Getty Images)

Violent crime in Camden is down 46% after peaking 2011, and murders are down 62% since 2012, according to The New York Post. The reforms undertaken by the city included measures traditionally championed by conservatives, such as taking on police unions, and measures traditionally championed by liberals, such as de-escalation training, and increased diversity. (RELATED: Ocasio-Cortez Defends ‘Defund The Police’ Slogan, Says It Shouldn’t Be ‘Repackaged’ For Suburban Whites)

Current calls to defund the police are typically light on details about what would come next. The details of a current proposal to disband the police in Minneapolis are vague, with members of the city council reportedly planning to replace its police force with a “community-based public safety model.” The Council’s president, Lisa Bender, told CNN Monday that being able to call the police during an emergency situation “comes from a place of privilege.”

While Camden serves as the gold standard for those who advocate for restraint-oriented police reforms, the effectiveness of tough-on-crime policing in major cities is also indisputable. From 1987-1994, New York experienced at least 2,000 murders every year. After Republican Rudy Giuliani stepped into the mayor’s office in 1994, and Republican George Pataki stepped into the governor’s mansion the next year, the state saw a drop in crime. Giuliani implemented what became known as the “Broken Windows Theory” of policing in the mid 1990’s. Crime in the state has gone down ever since, and the state has not experienced more than 1,000 murders in a year since 1997. The number of assaults and robberies in the city have also plummeted since then. Crime also took a nosedive in California during that same time period after Republican Los Angeles Mayor Richard Riordan was elected, and implemented similar tough-on-crime measures.

Both conservative and liberal police reforms have shown the ability to reduce crime, but there is no precedent in modern America for abolishing police departments as an institution.