A top official at a major police union said calls to defund the police will cause serious constraints on everything from department personnel to how officers are trained.

Vice President Emeritus of the International Union of Police Associations (IUPA) Dennis Slocumb said he’s concerned about additional burdens levied on departments that are already grossly understaffed in an interview with the Daily Caller News Foundation on Tuesday. The 32-year law enforcement veteran said more training is the answer to some police blunders, but adequate instruction is wishful thinking if departments don’t have the money to do it.

“If they’re going to reduce money, that money is going to have to come from equipment and training and personnel. If that’s the case, our detractors and certainly our supporters think we should have more training — not less,” he told the DCNF.

“Almost every” police department he knows of is understaffed and needs more funding to patrol the streets, and cutting those budgets won’t help, Slocumb added, especially amid protests over the death of George Floyd, who died after a Minneapolis police officer knelt on his neck for several minutes, according to video.

But law enforcement critics who support the movement to defund police departments, who are distinctively different from those who want to abolish police forces altogether, argue that budgets need to shift funding to other aspects of the community, according to Fox News.

“Defunding the police force is usually intended to take part of the budget and apply it to other social services that could possibly be handled better than by a police department,” John DeCarlo, a retired chief of police and associate professor and director of the master’s program in criminal justice at the University of New Haven, told Fox News.

He added: “[For instance], responses to mental illness and other specialized needs of the community that are handled by police departments simply because the police departments are the last agencies in a line when there is no one else to respond.” 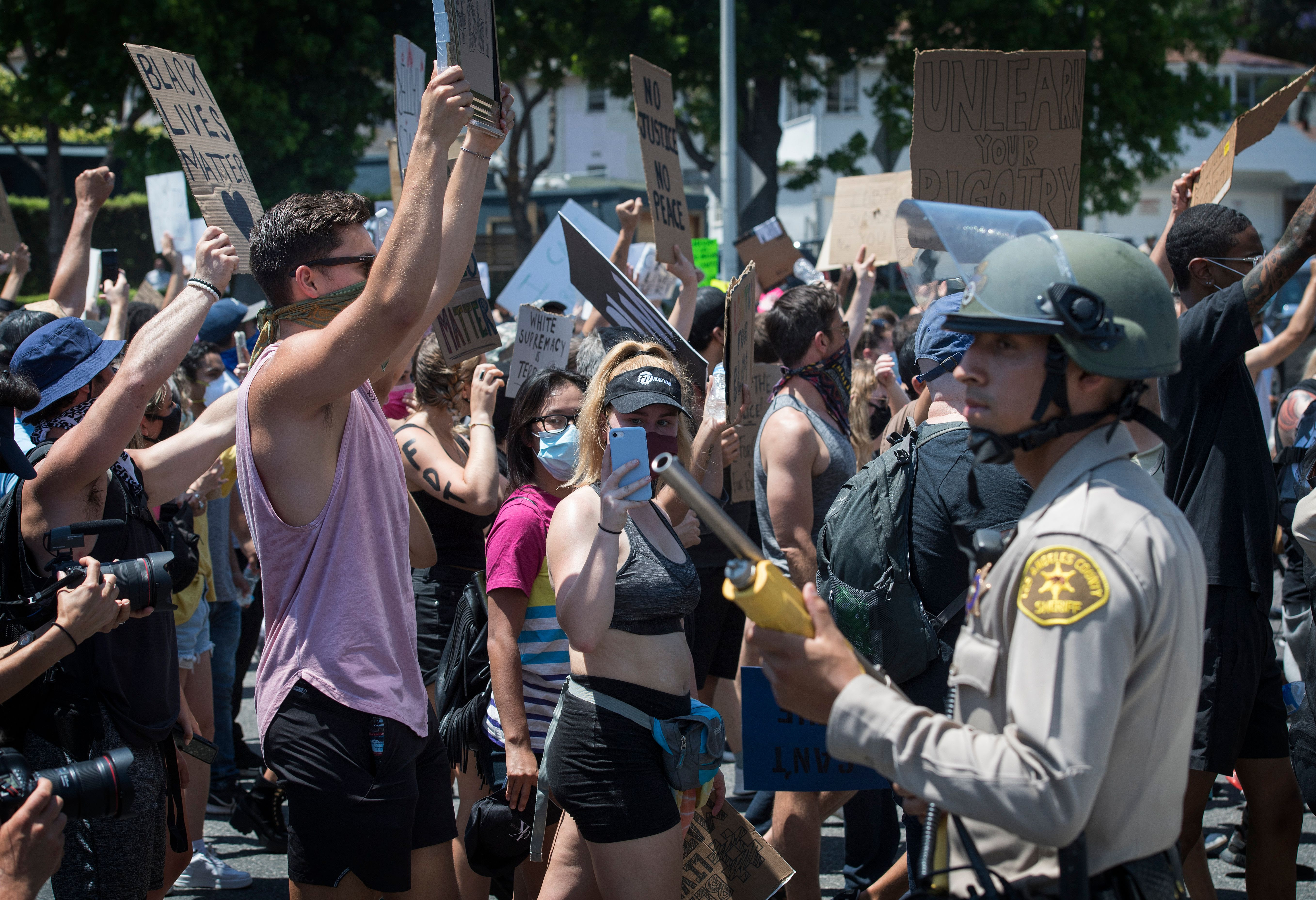 Officers from the Sheriff’s Department keep watch as demonstrators continued to protest the death of George Floyd, in West Hollywood, California on June 3, 2020 (MARK RALSTON/AFP via Getty Images).

Slocumb agrees that officers are not as well trained as mental health professionals to deal with psychiatric problems.

“No matter how much training we have, it really barely scratches the surface when you consider what mental health professionals have to go through before they’re allowed to deal with patients,” he said. “We’re sending men and women out to deal with these mental health cases where people are in crises, and they’re usually not responding with some kind of mental health team.”

The union official, however, does not condone taking funds from police to fix this problem. Instead, law enforcement should continue to respond to these calls — as lives are in danger — and certain professionals should respond accordingly, Slocumb said. (RELATED: Police Unions Abandon Biden After He Promotes Cop Reform)

“We should respond to any situation where someone’s life may be in jeopardy,” he said. “Like a house fire, we respond to protect or save lives, but the fire department has the resources and training to deal with the fire. Professional people should be able to quickly respond to deal definitely with mental health patients.”

Calls for defunding the police came from those fed up with attempting to reform departments. Some say additions like body cameras don’t go far enough.

“It is clear that our system of policing is not keeping our communities safe,” Minneapolis City Council President Lisa Bender said, according to USA Today. “Our efforts at incremental reform have failed, period.”

“The demand of defunding law enforcement becomes a central demand in how we actually get real accountability and justice,” she told WBUR, “because it means we are reducing the ability of law enforcement to have resources that harm our communities.”

Cullors further argued that, on the issue of training, no additional instruction is necessary because police officers are “incapable” of operating in black neighborhoods.

“It’s not possible for the entity of law enforcement to be a compassionate, caring governmental agency in black communities,” she told WBUR. “That’s not the training, that’s not the institution. We have spent the last seven years asking for training, asking for body cameras.”

Those in the defund the police camp have also pushed proposals that may mandate officers carry their own private liability insurance. Minnesota’s Council on American-Islamic Relations (CAIR) and a few Black Lives Matter groups suggested this idea on Monday as a way to reform the Minneapolis Police Department, according to an Associated Press report.

City officials believed the insurance would act as a strike system, where bad officers would eventually be uninsurable and unable to keep their badge, the AP reported.

“The employer provides the training, equipment and the selection … they want to do all of that and absolve themselves of any responsibility?” he asked.

He also expressed concern about officers who are already underpaid having to incur an additional financial burden from this. Slocumb said he doesn’t think it’s plausible for carriers to want to insure officers in the first place.