Russian authorities charged a prominent scientist with high treason for allegedly selling military secrets to China. He is under house arrest, which on June 5 was extended through October.

The Russian Federal Security Service arrested Valery Mitko, president of Russia’s prestigious Arctic Academy of Sciences and a retired naval officer, in February for passing classified information “of a military nature” to China, according to a warrant reported by Russian media outlet “Meduza.”

In particular, Mitko is reportedly accused of handing over documents containing state secrets about Russian submarines to Chinese intelligence agents in exchange for material reward during a March 2018 trip to China. The Russian academic had frequently traveled to China in recent years to conduct lectures at Dalian Maritime University.

Russia accuses one of its top Arctic scientists of passing state secrets to China https://t.co/SFlJCSKNDW

Mitko’s lawyer, however, has insisted that all the information his client had brought to China came from open source materials and was part of his lecture curriculum.

If found guilty, Mitko could face up to 20 years in prison for committing an act of high treason. (RELATED: Former US Marine Sentenced In Russia To 16 Years In Prison For Spying)

The revelation of Mitko’s arrest caused a sensation in Russian media, in large part because China and Russia have expanded their cooperation across many areas in recent years. The two countries upgraded their relationship to a “comprehensive strategic partnership” during a visit by Chinese President Xi Jinping to Moscow in June 2019, as reported by Xinhua Net.

Yet despite the burgeoning partnership between the two countries, China has been caught illegally copying Russian weapons and military hardware numerous times. The issue of technology theft has consequently become a rare point of tension in an otherwise friendly Chinese relationship. 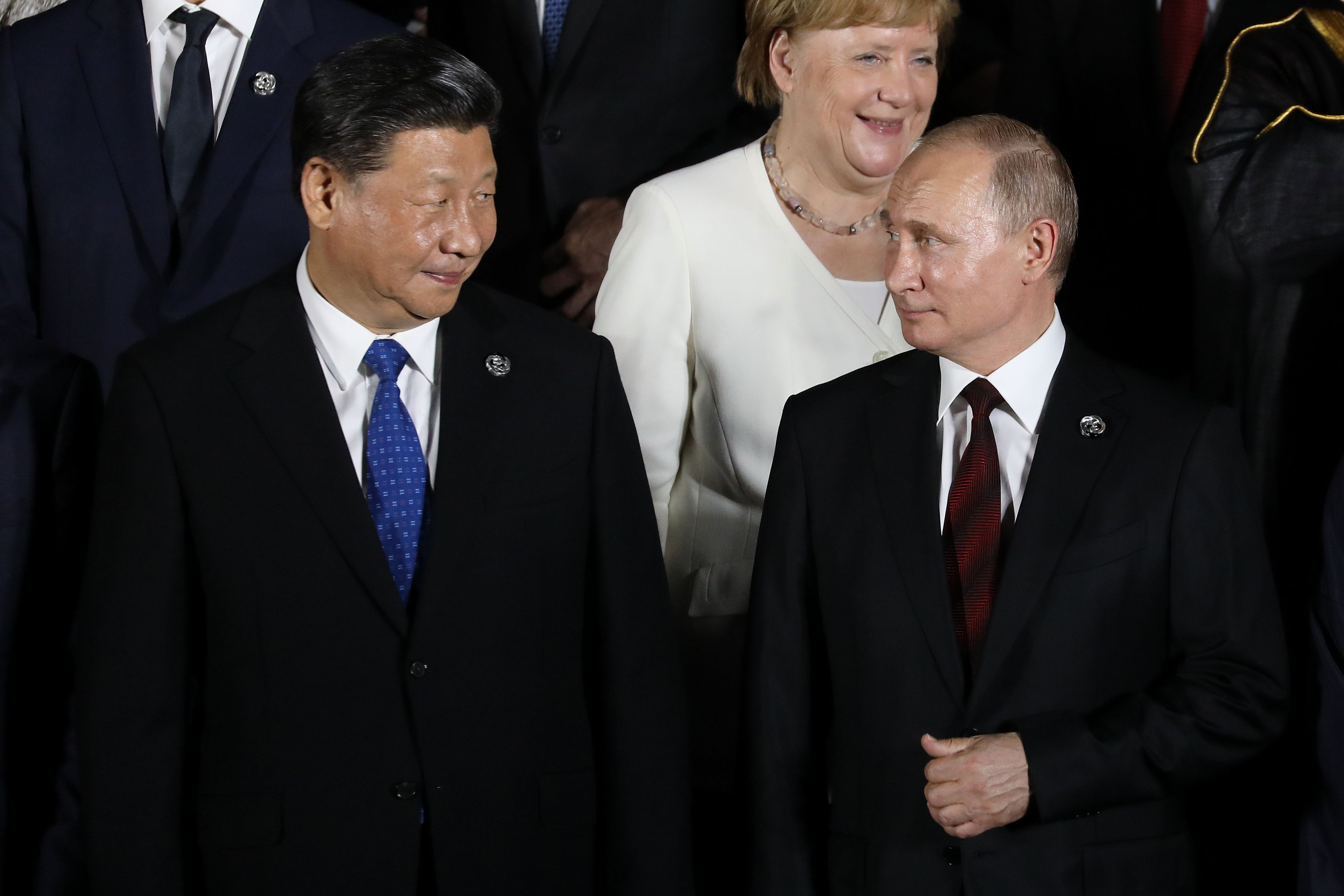 German Chancellor Angela Merkel stands behind Russian President Vladimir Putin (front R) and Chinese President Xi Jinping as they arrive to pose for a group photo before a cultural event at the Osaka Geihinkan in Osaka Castle Park during the G20 Summit in Osaka on June 28, 2019. (Photo credit: DOMINIQUE JACOVIDES/AFP via Getty Images)

“Unauthorized copying of our equipment abroad is a huge problem. There have been 500 such cases over the past 17 years,” said Yevgeny Livadny, Rostec’s chief of intellectual property projects, as reported by TASS Russian News Agency. “China alone has copied aircraft engines, Sukhoi planes, deck jets, air defense systems, portable air defense missiles, and analogs of the Pantsir medium-range surface-to-air systems.”

On June 11, a Russian court granted early release to Vladimir Lapygin, a famous space researcher who was sentenced to 7 years in prison in 2016 for reportedly providing China with classified information about Russian hypersonic aircraft. Lapygin has maintained his innocence.

Russia is not the only country to have a high-profile Chinese scientific espionage scandal recently. The United States has detained a number of scientists on suspicion of working for the Chinese government.

Two Chinese scientific researchers working at Boston-area universities were charged with being foreign agents for the Chinese government, as reported by the BBC in January.

Another Chinese researcher was arrested at Los Angeles International Airport last for making false statements on his visa application, according to the Los Angeles Times.

After being detained, the man revealed to federal authorities that he was a Chinese army major who “had been instructed by his supervisor, the director of his military university lab in the [People’s Republic of China], to observe the layout of the [University of California, San Francisco] lab and bring back information on how to replicate it in China.”

Science magazine reported Friday that “some 54 scientists have resigned or been fired as a result of an ongoing investigation by the National Institutes of Health into the failure of NIH grantees to disclose financial ties to foreign governments.”

The report noted that “in 93% of those cases, the hidden funding came from a Chinese institution.”