The results of a command investigation by the Navy indicated a carrier captain will not be reinstated after coming under fire for his handling of a coronavirus outbreak aboard the USS Roosevelt.

A final endorsement from the Chief of Naval Operations Adm. Mike Gilday said that the reinstatement of Captain Brett Crozier would not be in the best interest of the Navy. Furthermore, the promotion of Rear Adm. Stuart Baker for a second star has been delayed pending further examination, according to a statement from Gilday’s public affairs office.

The investigation into Crozier’s actions was initiated due to an unsecured email he sent to seven Navy captains, primarily intended for Baker, his commanding officer. Despite not being delivered outside the chain of command it was eventually leaked and reached news desks all over the nation, according to the Navy Times.

“It is clear to me following this investigation, CAPT Crozier did not act according to the standards I expect of our commanding officers,” Gilday said in his endorsement. “His actions and inactions in the timeframe before sending the email fell well short of what I expect from our officers in command.”

In the email obtained first by the Washington Post, Captain Crozier said he took responsibility for not taking more “decisive action” sooner but at that time his main concern was the safety of his sailors. 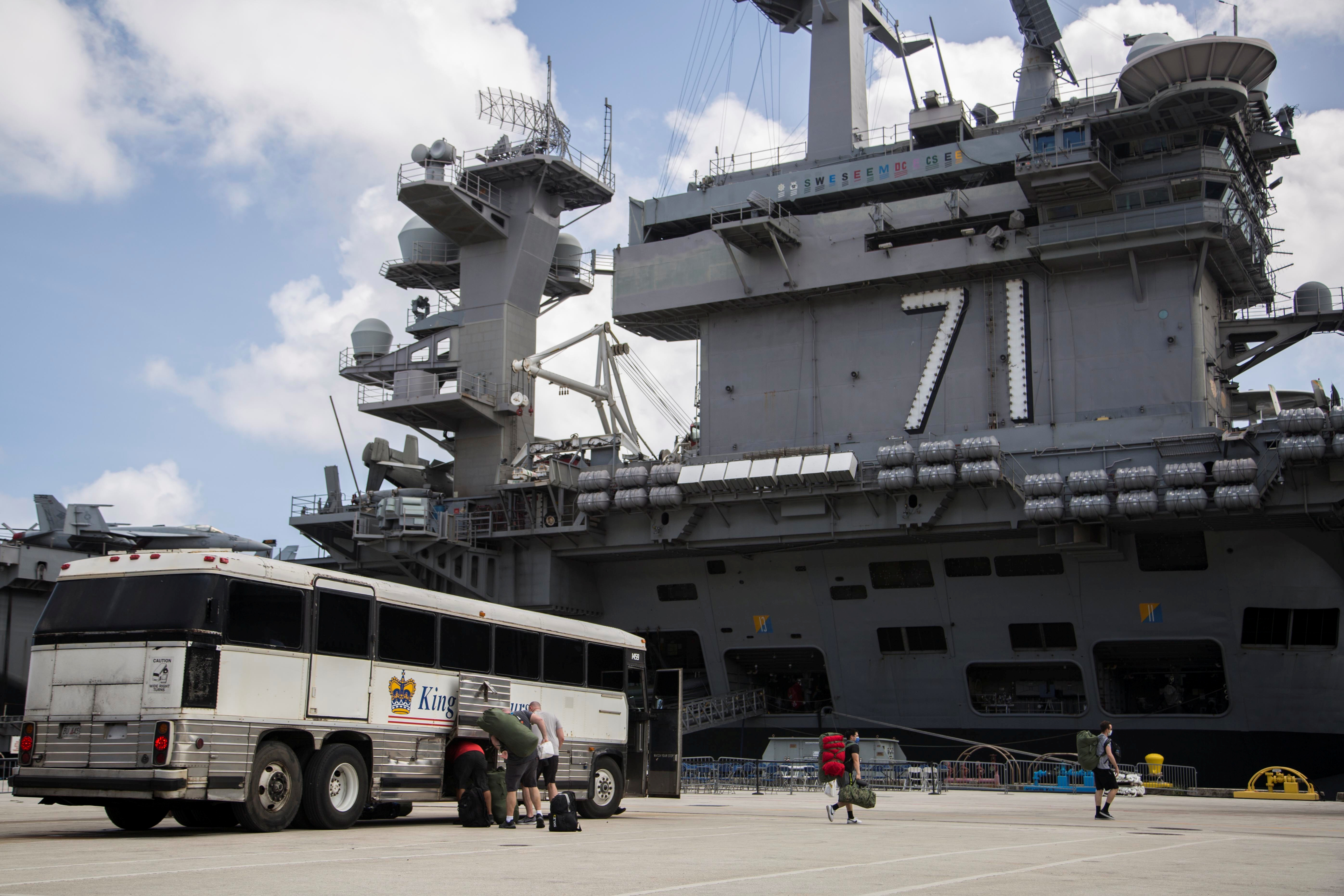 U.S. Navy sailors assigned to the aircraft carrier USS Theodore Roosevelt prepare to board the ship as part of a crew swap of cleaning and watch standing teams at Naval Base Guam April 29, 2020. (U.S. Marine Corps/Staff Sgt. Jordan E. Gilbert/Handout via REUTERS)

Gilday’s endorsement recognized the email had not been intended to reach the media, was not addressed outside the chain of command and was sent with the well-being of the crew in mind.

Crozier failed to “use available avenues to inform his chain of command prior to his sending of the letter” and “did not ensure he had a full understanding of the facts before sending the email,” according to Gilday, who noted that Crozier’s immediate superior on-board had not been briefed and other key members had not even been included in the email chain.

Gilday added that Crozier did not focus on implementing available options within his span of control. He exercised “questionable judgement,” said Gilday, when he released sailors from quarantine onboard the ship allowing for increased spread of the virus. Crozier prioritized the comfort of the crew over their safety, according to Gilday.

In April, Gilday made a recommendation that Crozier be returned to his command of the USS Theodore Roosevelt. “Had I known then, what I know today, I would not have made that recommendation,” Gilday said Friday at the Pentagon, according to CNBC. (RELATED: Modly Issues Apology To The Navy, CPT Crozier And USS Roosevelt Crew)