The statue of a Roman Catholic saint, Junípero Serra, will be removed from public display over accusations that statues of the missionary reflect oppression of indigenous peoples, according to city officials.

The mayor of Ventura, California, representatives from the Barbareño/Venureño Band of Mission Indians and a pastor of the Mission San Buenaventura issued a joint statement agreeing to take down a bronzed, nine-foot statue of Serra and have it “moved to a more appropriate non-public location” on Thursday, according to the Los Angeles Times.

The statue currently stands with his back to the Ventura City Hall and facing the Pacific Ocean.

“I always knew that this moment, despite all the issues our people have faced, would happen,” Chief Julie Tumamait Stenslie of the Barbareño/Venureño Band told the LA Times. “We’re constantly fighting to correct our history, and if there was ever a time to speak up, the time was now.”

The move comes as statues of Confederate figures are being removed across the country following the protests against police brutality and the death of George Floyd, a black man who died after a white Minneapolis police officer knelt on his neck for several minutes, video of the incident showed. Derek Chauvin, the officer, has been fired and arrested on second-degree murder and manslaughter charges.

Serra, a Franciscan monk credited for spreading Catholicism in the western United States, founded nine of the 21 missions along the coast of California beginning in 1769 and was canonized a saint by Pope Francis in 2015. He was the first Catholic saint to be canonized on U.S. soil.

Serra “sought to defend the dignity of the native community, to protect it from those who had mistreated and abused it,” the pope said during the Washington, D.C. canonization service. (RELATED: Concrete Walls Put Up Around Confederate Statue In Virginia)

Catholics have praised Serra for his dedication to evangelizing the indigenous peoples of California and for pushing back against the treatment Spanish soldiers showed to the native people, but critics accused him of pushing native tribes to abandon their cultures by converting to Catholicism. Some criticized Serra for being “complicit” in “the brutal and dehumanizing conquest of native tribes in California.”

Serra has also been accused of introducing foreign diseases to indigenous tribes and forcing tribes to build the missions, according to the LA Times. 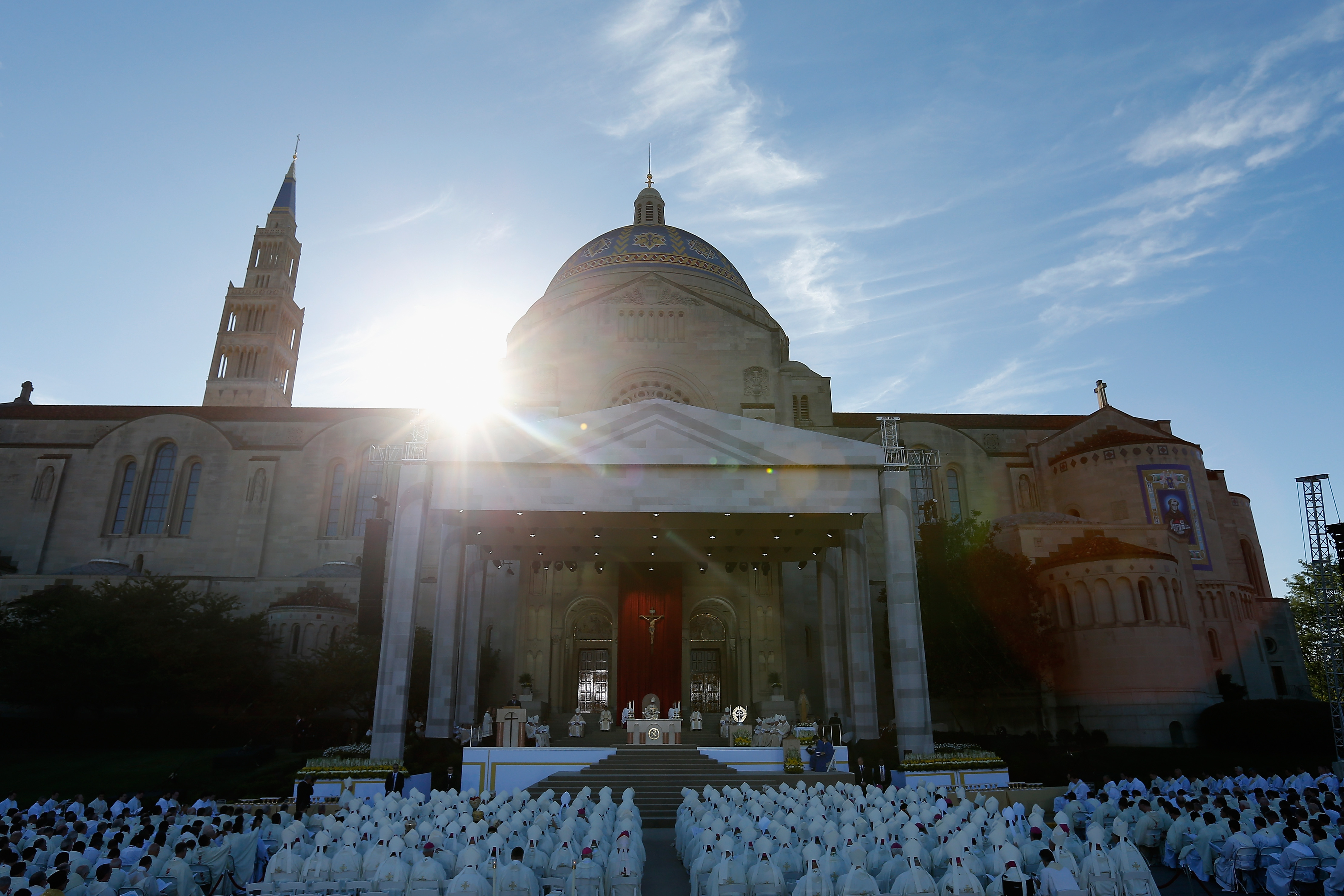 Pope Francis celebrates the canonization Mass for Junipero Serra on the East Portico of the Basilica of the National Shrine of the Immaculate Conception on September 23, 2015 in Washington, DC. (Photo by Rob Carr/Getty Images)

“Serra presided over a ‘near-genocidal policy’ of putting Native Americans on reservations and forcing them to build Catholic missions,” a petition against the statues of the missionary said, adding that Serra is “often compared to Hitler.” The petition, which had gathered over 5,400 signatures by Friday morning, does not specify who compared Serra to Hitler.

“Serra is not the historical hero people thought when this landmark statue to him was erected, one of many throughout California, as a historical emblem, he is toxic and should be removed,” the petition said. “As a community we cannot and will not support the dehumanization of the Native American community any longer. We are calling for restorative justice and are petitioning for his statue to be removed immediately.”

“I just don’t believe many people understand what it means to our people to pass by City Hall and see that statue and the pain it’s caused and causes to do this day,” Stenslie told the LA Times. “We in Ventura are a much more diverse community and deserve to be represented by someone else.” (RELATED: California Legislators Say 137-Year-Old Christopher Columbus Statue Will Be Removed From State Capitol)

“Just because we don’t have Confederate generals or slavery in California like in other parts of the country doesn’t mean we don’t have monuments to white supremacy and genocide,” Leaños said. “We’re going to be out there on Saturday to say thank you, but also to remind the city government that we’re going to be watching them.”