The Justice Department revealed the existence of the notes in a court filing Tuesday. Michael R. Sherwin, the acting U.S. attorney for Washington, D.C. said that Strzok, who served as deputy chief of counterintelligence, likely took the notes between Jan. 3 and Jan. 5, 2017.

On Jan. 5, 2017, then-FBI Director James Comey met at the White House with Obama, Biden, then-Deputy Attorney General Sally Yates and then-National Security Adviser Susan Rice. The officials discussed Flynn during that meeting, according to an email that Rice wrote to herself more than two weeks later.

President Donald Trump and his supporters have recently suggested that Obama and Biden were more involved in the FBI’s investigation against Flynn and the Trump campaign than previously known. Trump coined the term “Obamagate,” and accused his predecessor of directing “the biggest political crime in American history.”

Days before the January 2017 White House meeting, Flynn had spoken by phone with then-Russian ambassador Sergey Kislyak. Flynn would later plead guilty to making false statements to the FBI regarding his conversation with Kislyak. But the retired general retracted that admission of guilt on Jan. 29, triggering a series of events that led to the dismissal of his case on Wednesday.

The content and context of Strzok’s handwritten notes are hard to discern, but Flynn’s lawyers called the document “further stunning and exculpatory evidence” that was “previously withheld” from Flynn.

Another line quotes a person referred to as “P” — a possible reference to President Obama — saying that he wanted “the right people on it.”

Flynn’s lawyers said that the note shows that “Mr. Obama himself directed that ‘the right people’ investigate General Flynn.”

“According to Strzok’s notes, it appears that Vice President Biden personally raised the idea of the Logan Act. That became an admitted pretext to investigate General Flynn,” the attorneys wrote in the filing. 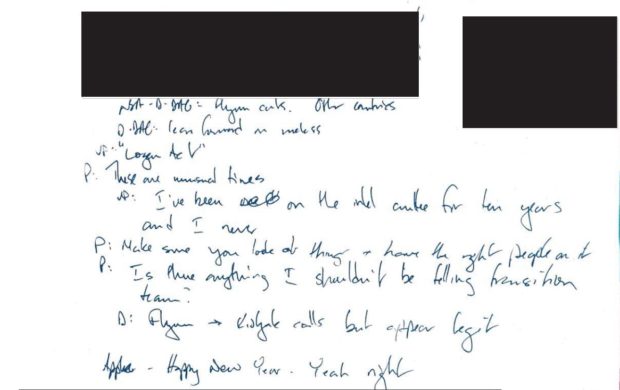 Flynn’s attorneys filed the document just as a federal appeals court ordered Judge Emmet Sullivan to dismiss charges against Flynn. The Justice Department filed a motion on May 7 to drop the case against Flynn, but Sullivan was seeking to force prosecutors to explain the decision in a series of hearings.

Biden has acknowledged that he was aware of an ongoing investigation into Flynn before he left office, but he has downplayed his involvement in the probe.

“I was aware that they asked for an investigation, but that’s all I know about it,” Biden told ABC’s George Stephanopoulos in a May 12 interview.

A day after the Biden interview, Republican senators released declassified documents which showed that Biden was among dozens of other Obama-era officials to make requests for intelligence reports that made reference to Flynn.

Biden made the so-called unmasking request on Jan. 12, 2017, a week after the White House meeting where the Logan Act was raised. Biden has yet to face questions about why he made the request that unmasked Flynn’s identity in intelligence reports.

A day before that meeting, the FBI’s Washington Field Office had recommended that the bureau close a counterintelligence investigation into Flynn’s possible ties to Russia. The memo said that there was no evidence that Flynn was working covertly with the Kremlin.

The FBI had opened an investigation of Flynn and three other Trump associates in August 2016. Strzok directed the probe, called Crossfire Hurricane. Documents released in Flynn’s criminal case showed that Strzok intervened at the last minute on Jan. 4, 2017 to keep open the investigation of Flynn.

The FBI wanted to keep the investigation open because investigators had just received a transcript of Flynn’s call with Kislyak, which occurred on Dec. 29, 2016. FBI emails show that Strzok and his colleagues began discussing the Logan Act.

The investigation into Flynn’s call with Kislyak geared up on Jan. 12, 2017, when Washington Post columnist David Ignatius reported that a senior U.S. government official revealed that Flynn had spoken with Kislyak by phone.

Ignatius raised the possibility that Flynn and Kislyak discussed U.S. sanctions against Russia. The columnist suggested that such a conversation might violate the Logan Act, which has been on the books since 1799 but has never been successfully prosecuted.

In response to Ignatius’s report, Mike Pence, the incoming vice president, said in a Jan. 15, 2017 interview that Flynn did not discuss sanctions against Russia with Kislyak.

McCabe wrote in a memo after his phone call with Flynn that he convinced the national security adviser to conduct the interview without a lawyer present.

“I don’t know,” Comey said when asked if he believed Flynn lied.

“I think there is an argument to be made that he lied. It is a close one.”

The Justice Department sought to drop the case against Flynn citing the newly discovered FBI documents that preceded the White House interview. Timothy Shea, the now-former acting U.S. attorney for Washington, D.C., wrote in the May 7 court filing that Flynn’s calls with Kislyak “did not warrant either continuing that existing counterintelligence investigation or opening a new criminal investigation.”

“The calls were entirely appropriate on their face,” Shea wrote in the filing.

Biden’s campaign did not respond to a request for comment.