The student government Senate president at Florida State University in Tallahassee, Florida was removed from his position earlier this month after he was accused of making transphobic, racist, and “anti-abortion” comments.

Jack Denton, 21, was voted out of his position after his texts from a private group chat were leaked to a fellow senator. He denounced the organizations Black Lives Matter, ACLU and Reclaim the Block in the texts, saying that these organizations promote causes such as transgenderism and abortion.

“What happened with me at Florida State is egregious and an egregious attack on the Constitution,” Denton told the Daily Caller News Foundation. “Public universities like Florida State are supposed to be marketplaces of ideas and free expression. Expression should be encouraged, not shut down.”

“Our goal is to advise him on what his options are to challenge any unconstitutional or improper application of these student policies,” Langhofer told the DCNF. “Because the bottom line is students don’t give up their religious freedom when they step onto a public university campus.” 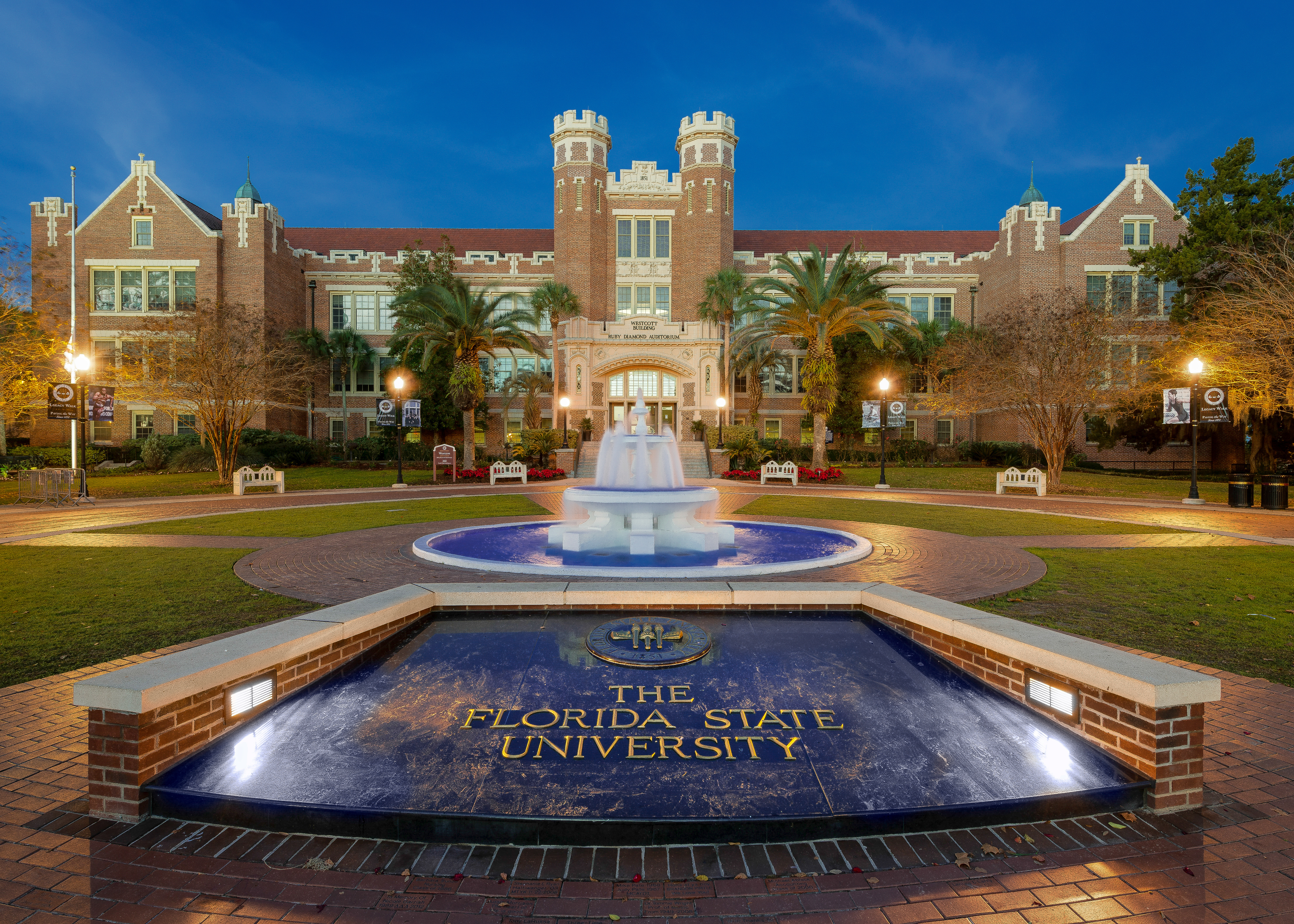 Denton, who is a rising senior studying political science, describes himself as a devout Roman Catholic. The group chat where he sent the messages in question is a Catholic Student Union group chat where students usually send prayer requests or share their faith in other ways. (RELATED: Trump Looks To Force Campuses To Protect Free Speech)

In the wake of the death of George Floyd, one unnamed student used the chat to encourage others to donate to a series of organizations and charities. Floyd died in Minneapolis police custody on May 25 after an officer kneeled on his neck, video shows.

“BlackLivesMatter.com fosters ‘a queer affirming network’ and defends transgenderism. The ACLU defends laws protecting abortion facilities,” Denton said in the texts. “If I stay silent while my brothers and sisters may be supporting an organization that promotes grave evils, I have sinned through my silence.”

“I just want to make it explicitly clear that black lives matter,” Denton told The Daily Caller News Foundation. “I think any decent human would agree with me on that point. However, Black Lives Matter, the organization, advocates for things that are explicitly anti-Catholic.”

But, what began as text messages sent to a group of fellow Catholic students soon devolved into something Denton said was completely unexpected.

One hour into a routine virtual Senate meeting that Denton was presiding over on June 3, another senator, Khundavi Gnanam, made a motion of no confidence in Denton as Senate president. Gnanam was sent screenshots of Denton’s text messages by another person in the group chat.

Denton, who had not been given forewarning of this motion, temporarily ceded his authority to Ahmad Daraldik, the president pro tempore of the Senate. The meeting then went into an hour of debate.

“I just think these statements are unacceptable,” said Deía Medley Neyra, a senator who claims to be the first transgender woman to serve in the legislative body. “Those sorts of opinions shouldn’t be shared in public chats with other students.” 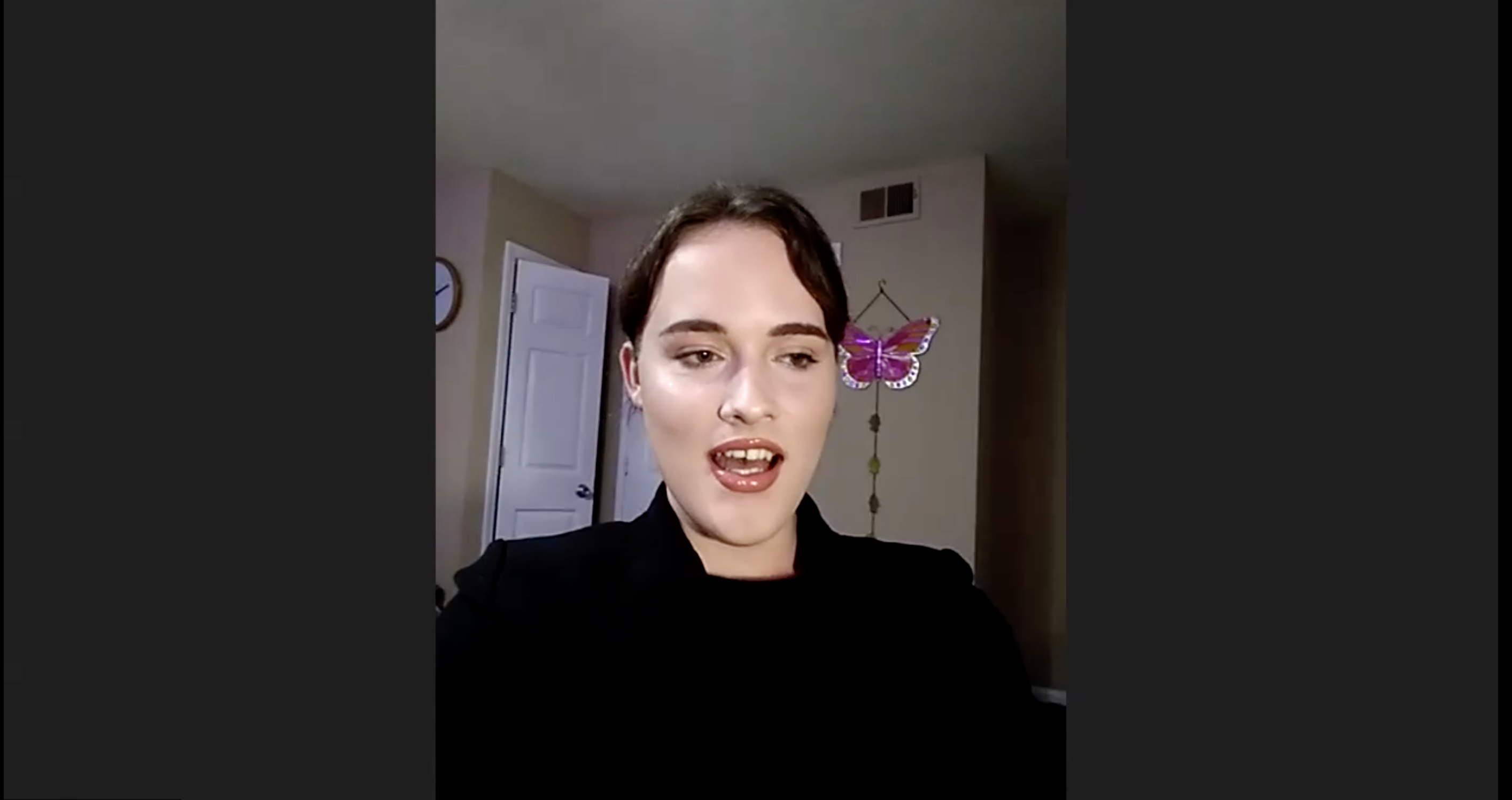 “We live and die by our choices and to say your opinion, say your belief in such a public setting with such strong wording as ‘grave evils,’ you can have your opinions and say them, but you should be held responsible for those choices,” said Daniel Ryan, another senator.

However, there were also senators who spoke in defense of Denton.

“We may disagree with what he said or how he said it, but it is important to express that we protect people’s individual right to express their beliefs,” said James Bateman.

Several student organizations rallied in the aftermath of the failed vote to remove Denton from his position as Senate president. The goal was to force another vote.

“Denton’s words send a dehumanizing message to womxn, trans, queer, and black students at FSU, and prove that he is unfit to hold the office of Senate President,” reads a June 4 editorial published in Spire Magazine, Florida State University’s student paper. “The Spire staff as a united front would like to announce our support for the removal and/or resignation of Jack Denton from the SGA senate.”

“Denton’s comments were explicitly racist, transphobic, and anti-choice, referring to the transgender community and the pro-choice movement as ‘grave evils,’” the Florida State University Pride Student Union said in a statement DCNF. “We as the Pride Student Union condemn these comments made by the Senate President as an act of blatant discrimination.”

“As the president of the SGA Senate, an influential position within student government, Denton’s comments reflect problematic biases that could lead to unfair treatment of our LGBTQ+ and Black organizations on our campus,” the Florida State University College Democrats said in a statement sent to the DCNF.

In the run-up to the meeting, though, senators who voted against removing Denton as senate president were pressured to vote in favor of the measure. Senators were being threatened with people saying they would vote them out in the next election if they didn’t vote against Denton.

“Someone posted in one of the Florida State University class Facebook pages the list of all the senators who voted to not remove me as senate president,” Denton said. “It was really this mob mentality, like we got to force these people to act this way despite the way they voted two days ago.”

The June 5 emergency meeting attracted so many viewers that the Zoom capacity had to be expanded and more than 700 people viewed the meeting, according to Denton.

The meeting was public, meaning Florida State University students were able to voice their opinions.

“There’s a difference between having viewpoints and having beliefs that can negatively affect others,” said Emery Lowden, a student. “I’m not trying to attack you. I’m trying to educate you.”

“The things Jack Denton has said have hurt a lot of people,” Lauren Callahan said. Callahan mentioned that she is a member of the Florida State University queer community and organized the petition that led to the meeting.

“I think it’s disgusting how you’re using religion to defend and uphold your hate and prejudices and biases,” student Gigi Cruz said.

“I don’t feel safe with you as president,” said student Valentina Brown. “You are condemning our identities, an integral part of our selves and our nature.” 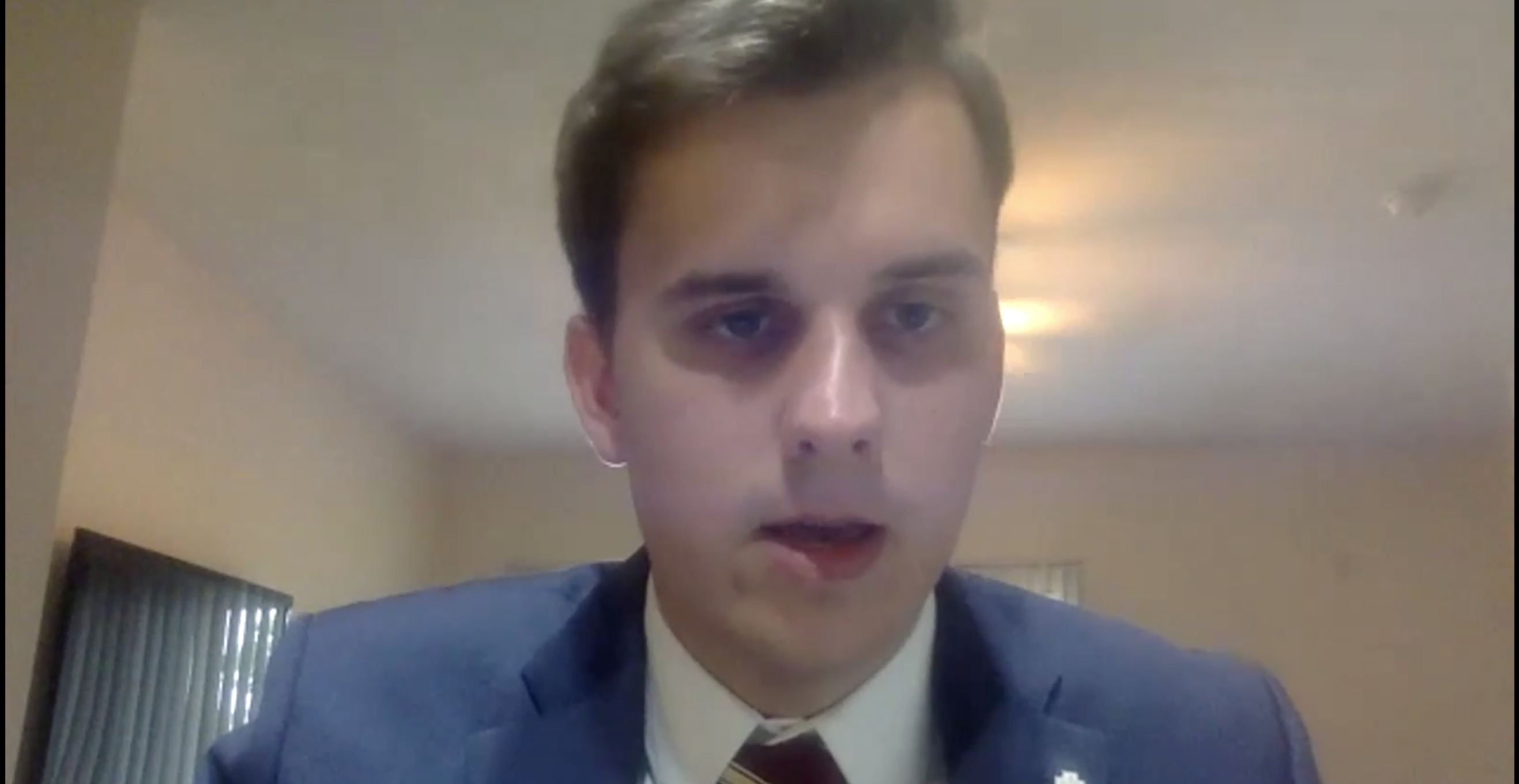 The meeting, which mainly consisted of students condemning Denton, lasted for about six hours.

“I don’t know how I got through that Friday night meeting without the grace of God to put it quite bluntly,” Denton said. “I could not have sat through six hours of people just spewing hate and telling me how terrible of a person that I am without the prayers and encouragement from dozens and dozens of people.”

“It was appalling to see the level of vitriol aimed at Jack for, again, just simply stating a fact about what Catholic views are,” Langhofer said. “He didn’t even say to the others that you have to do this. He said, I just want you to be aware of what Catholic teaching is on this.”

Thirty-eight senators, or 86%, voted to oust Denton at the end of the meeting.

Florida State University declined to comment on the Senate’s decision to remove Denton as president, calling it a student government matter.

Denton appealed the senate’s decision to the Florida State University Supreme Court on Thursday, according to Langhofer. He is alleging that there was a violation of Senate policy, university policy, and his rights under the First Amendment.

“He wants to be reinstated and finish out his term,” Langhofer said. “He deserves to be in there. He was elected properly and he didn’t do anything to be removed.”

Meanwhile, Denton’s replacement, Ahmad Daraldik – who had been president pro tempore of the senate – has faced criticism of his own.

Daraldik, who is a Palestinian-American, allegedly said “F*** Israel” and “stupid Jews,” and compared the Israeli government actions in Palestine to Nazi Germany’s genocide of the Jews, according to a Change.org petition to remove him from the senate. More than 8,000 people signed that petition. 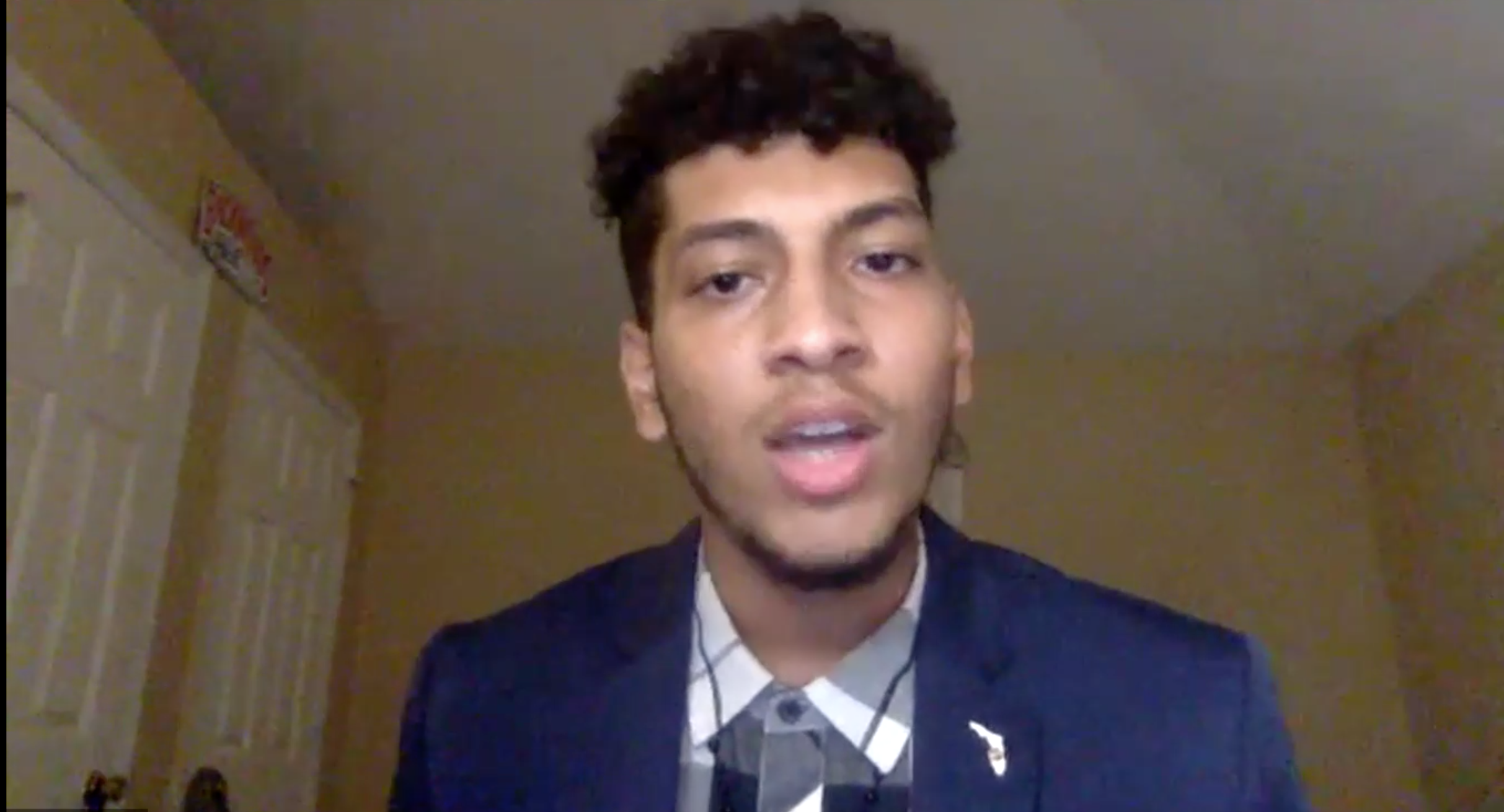 Ahmad Daraldik speaks during a June 17 meeting in which a vote of no confidence in him took place after his past allegedly anti-Semitic social media posts surfaced. (Photo: Florida State University/Screenshot/Zoom)

“Ahmad, who has personally lived under Israeli military occupation, has the right to feel frustration and dissatisfaction with the state that illegally occupies his family’s home in the West Bank,” the statement said. “The coordinated smear campaign against Ahmad Daraldik is rooted in anti-Arab racism and Islamophobia.”

Several Jewish students spoke out against Daraldik during a senate meeting last Wednesday in which a vote of no confidence in Daraldik took place.

“It is not okay to discriminate, it is not okay to make anti-semitic comments, and it is also not okay to support one minority but not another,” said Amanda Press, a Jewish student. “I believe that you should be removed because quite frankly the words that you have used upon my people, upon me, and just in general are not okay.”

Daraldik defended himself saying that he made the comments when he was living in Palestine “under an oppressive occupation.” (RELATED: Fear of Self-Censorship Not ‘Well-Founded,’ Judge Rules Against UT Austin Students In Free Speech Case)

The vote of no confidence in Daraldik failed with 19 out of 41 senators voting in favor. Daraldik did not return the DCNF’s emails seeking comment.

“I am aware of a controversy involving the FSU Student Senate President who has posted offensive anti-Semitic rhetoric online,” said Florida State University President John Thrasher in a statement after the vote to remove Daraldik failed. “I want to take this opportunity to unequivocally state that we will not tolerate discrimination against groups or individuals.”