The United States Supreme Court ruled Monday that a pro-life law violates the rights of both women and abortion providers in Louisiana.

Chief Justice John Roberts sided with liberal members of the court in the close 5-4 ruling.

“The Louisiana law imposes a burden on access to abortion just as severe as that imposed by the Texas law, for the same reasons,” Roberts wrote in his opinion. “Therefore Louisiana’s law cannot stand under our precedents.”

Democratic Louisiana state Sen. Katrina Jackson, the author of the law at the heart of the decision, spoke out in a Monday video statement following the decision.

“The Supreme Court has issued a tragic decision that continues its practice of putting the interests of for-profit abortion businesses ahead of the health and safety of women,” she said.

“Together with my colleagues, both Democrats and Republicans and women and men, we passed the Unsafe Abortion Protection Act to protect the health and safety of women in Louisiana,” she added. “While today’s decision is not what we wanted, we will never stop working to put the women of Louisiana above the interests of the abortion businesses.”

Pro-lifers had expressed both hope and anxiety over the landmark abortion ruling to the Daily Caller News Foundation ahead of the decision.

Louisiana Right to Life Associate Director Angie Thomas told the DCNF that the organization, which introduced the law with Jackson, was “anxiously awaiting” the decision, warning that “the Louisiana abortion industry, with its long history of health and safety violations, cannot speak for Louisiana women.”

Louisiana Attorney General Jeff Landry expressed hope about the ruling to the DCNF, emphasizing that “Louisiana abortion providers have a record of non-compliance with basic safety regulations, and now they want a special exemption from generally-accepted medical standards that apply to similar surgical procedures in our State.”

“Women seeking abortions deserve better than that; they should have the same assurance of prompt and proper care in the event of complications,” he said.

But others predicted that the justices would rule in favor of the abortion providers, given the rulings of the past several days as well as the heated nature of the opinions written by the conservative justices. (RELATED: ‘Brazen Abuse Of Our Authority’: Alito, Kavanaugh Criticize LGBT SCOTUS Ruling)

Chief Justice John Roberts and Justice Neil Gorsuch joined the court’s four liberal judges in a landmark decision June 18 that federal law protects LGBT employees from discrimination, while Roberts joined the liberal justices in a ruling announced Thursday that the Trump Administration could not terminate the Deferred Action for Childhood Arrivals (DACA) program.

The court took up June Medical Services v. Russo in March, a case in which an abortion provider challenged a 2014 Louisiana state law introduced by Jackson.

Landry, the Louisiana AG, has maintained that the law does not force clinic closures, citing the Fifth Circuit Court of Appeals finding that “there is no evidence that any of the clinics will close as a result of the Act.” Louisiana abortion providers will be able to obtain admitting privileges if they are providing competent care, Landry said in a February press release.

As is usual with abortion cases, June Medical v. Russo has been fraught with emotion. Protestors assembled outside the Supreme Court in early March as the justices gathered to examine the case, and Senate Minority Leader Schumer sparked a backlash through what some called a threat to Justice Brett Kavanaugh and Justice Neil Gorsuch.

“You won’t know what hit you if you go forward with these awful decisions,” he added. (RELATED: This Pro-Life, Female Democrat’s Law Is At The Heart Of Upcoming Supreme Court Abortion Case) 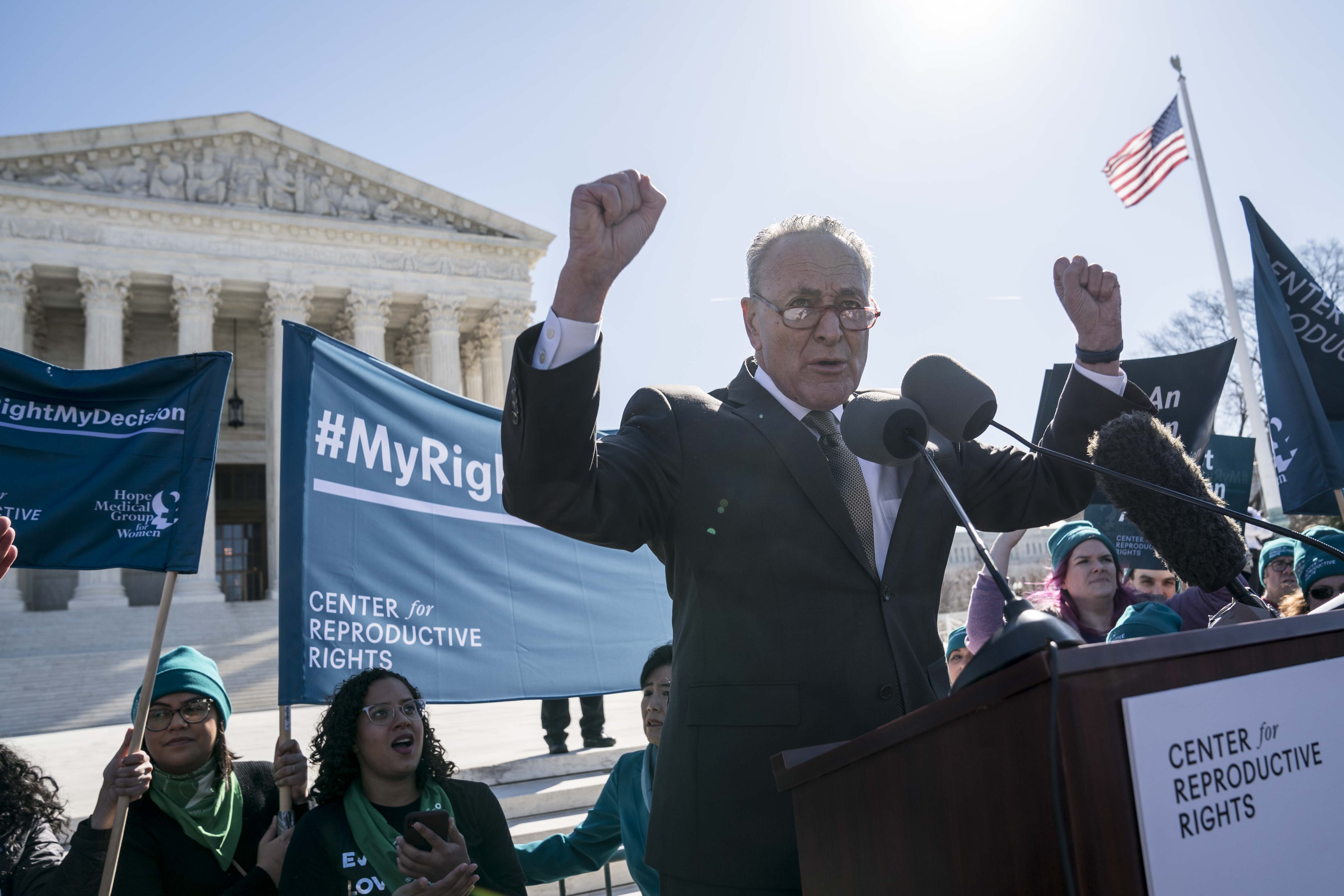 The senator’s comments referenced the political price Republicans “will pay for putting them on the court” as well as “a warning that the justices will unleash major grassroots movement on the issue of reproductive rights against the decision,” Schumer spokesman Justin Goodman told the DCNF at the time.

“Let me ask you my friends, are we going to let Republicans undo a woman’s right to choose,” Schumer asked the crowd. “Are we going to stay quiet as they try to turn back the clock? Are we going to give up or waver when things get tough?”

The pro-abortion activists in the crowd responded to each of these questions with a resounding “No.”