The Remington UltraLight Executive R1 isn’t only sized right for concealed carry, but just might be the best 1911 the company has turned out.

How The Ultralight Executive R1 Measure Up For Concealed Carry:

Does the world really need another 1911? After all, the 1911 is the most prolific handgun design of all time. It’s the most customizable, and it’s manufactured by more companies and in more configurations than any other pistol. So, the answer to that question is probably, “No” … unless, of course, it’s a really, really good 1911.

Somehow, the Remington R1 UltraLight Executive eased into production without my knowledge; I only discovered its existence while visiting my friend, Carlos Martinez, at Remington headquarters in July 2019. As with the plethora of hillbillies making moonshine during prohibition, sometimes, you have to “know a guy” to find the good stuff.

Remington began the modern manufacture of 1911 handguns about a decade ago with the introduction of the R1. The R1 was what most would call a basic 1911, without a lot of the features such as extended safeties, night sights and checkering that are found on contemporary 1911s generally manufactured for the self-defense market. It was very similar to the first 1911s Remington assembled a century ago. Near the end of World War I, Remington built 1911s for the military, and today, they’re highly sought after by collectors.

For the past 10 years, Remington has offered a variety of 1911 pistols (such as the R1 Enhanced, R1 Centennial, R1 Carry and R1 Commander). The company even offers an R1 Limited Single Stack model for competition and a long-slide version of the R1 chambered in 10mm for hunting. The R1 UltraLight Executive is the best 1911 that Remington offers for concealed carry, and it just might be the best R1 1911 it’s ever turned out.

The UltraLight Executive is built on an anodized Commander-sized aluminum frame. The aluminum frame reduces weight by 4 ounces (12 percent). This might not seem like much, but when you carry a pistol all day, that’s substantial. The front strap of the frame has been checkered at 20 lines per inch. But the neatest features are the bobbed grip and smooth mainspring housing. 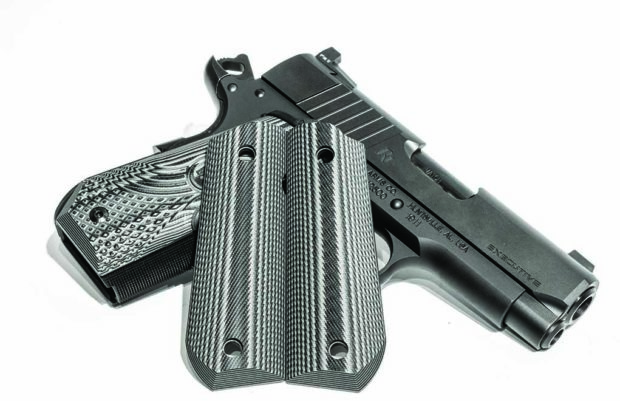 Remington’s UltraLight Executive comes out of the box with an attractive set of gray/black VZ G-10 grips.

A checkered mainspring housing on a 1911 is a foolish thing: If you shoot much at all, it will eat away at your hand. Remington was smart to use a smooth mainspring housing, and it was a genius decision to radius the bottom rear of the grip to not only enhance the feel of the pistol in the hand but also help keep it from snagging on clothing while carried concealed.

Although this pistol is built on a Commander-sized frame, it’s not a Commander-sized pistol. A 1911 Commander—as the term was coined by Colt in 1950—has a 4.25-inch barrel. The Remington R1 UltraLight Executive has a 3.5-inch barrel. This barrel length is most commonly associated with an Officer’s model (another designation created by Colt in 1985). Officer model 1911s—1911s with 3.5-inch barrels—are typically built with a shortened grip frame. This makes them easier to conceal; however, it also makes them harder to hold onto, especially with full-power .45 ACP loads. Another trait that’s common with 3.5-inch-barreled 1911s is poor reliability. Quite often, they’re about as reliable as a politician.

For the R1 UltraLight Executive, Remington paired a Commander-sized frame with an Officer’s model-sized barrel. Combined with the radiused grip, the result is a very-concealable, easy-to-hold-onto pistol that’s chambered for the .45 ACP. What you have is a pistol that’s, well, perfectly sized: It has just as much grip as it does barrel. It fits well in your hand, points well on target and moves comfortably under recoil.

But there’s more goodness to this pistol than just its size. The steel slide has a rugged and element-resistant PVD coating. It also has six deep, grasping grooves at the rear and none of those silly grasping grooves at the front (fingers do not belong near the muzzle of a pistol). All the sharp edges have been knocked off, and the front of the slide is drastically radiused to allow for smooth holstering. The Remington logo is proudly cut into the left side of the slide, and the “R1” and “EXECUTIVE” are tastefully engraved onto the right.

Most importantly, the slide is fitted with a proprietary set of 3-dot tritium sights from XS Sights. The rear sight is tall and ledged to help with one-handed operation on a belt or boot heel, and it has a wide U-notch to mate with a substantial white-dot surrounding a tritium vial on the front sight. These sights are bold and fast on target.

Another feature that sets the UltraLight Executive apart is how it is field-stripped. Many 3.5-inch 1911s are as hard as Chinese arithmetic to take apart. Not the UltraLight Executive: You simply remove the slide stop as normal, as well as the slide slips of the frame. The recoil spring and full-length guide rod are captured in the slide with the barrel, but they can easily be removed with finger pressure. Then, the recoil spring plug is removed from the rear of the slide—as opposed to the front (this pistol does not have a barrel bushing). Once the plug is removed, the barrel simply slips out the front of the slide.

Some additional features worth noting are the extended thumb safety, which is sized perfectly for fast activation on the upsweep and deactivation on the down. The pistol also has a compact, upswept grip safety that’s very comfortable, with a raised bump at the bottom to ensure positive grip safety deactivation. The trigger is of medium length, serrated on the front and ventilated with three holes. Pull weight averages a consistent 3 pounds.

And finally, the pistol is fitted with standard-thickness G-10 grips that present a very contrasting and appealing, light-to-dark-gray appearance. I’m not a G-10 grip aficionado, but these look exceptionally good on this pistol. However, I removed the factory grips on my pistol and installed a set of Crimson Trace Master Series Laser Grips, which look very similar.

After about 50 rounds—just to get used to the pistol—I chronographed five different loads with bullets ranging in weight from 135 to 230 grains. After that exercise, I fired five five-shot groups from the off-hand standing position at 10 yards with each of the five loads I’d chronographed. The average group size for all 25 groups fired was 1.76 inches. I wouldn’t expect to win a bullseye match with this 1911, but it shoots very well, considering its barrel length and sight radius. If you miss at defensive handgun ranges with this pistol, you should probably schedule your immediate attendance at the 250 Pistol Course at Gunsite Academy.

I also ran the pistol through my favorite practical drill—the Forty-Five Drill—using the 230-grain Federal Syntech load. In this drill, the object is to get five hits in a 5-inch circle at 5 yards in fewer than five seconds while drawing from concealment. Using a cover vest and a Galco Gunleather Avenger holster, my average time was 3.61 seconds, with three of the 25 shots outside the 5-inch circle. Those three shots were part of the fastest three strings I fired; I missed once in each string. To keep all the shots inside the 5-inch circle with the R1 UltraLight Executive, my time on this drill had to be at about 3.75 seconds or slower. For what it’s worth, this is about average for me when using a Commander-sized 1911.

I had four stoppages. On one occasion, a 200-grain SWC got ahead of the extractor while being chambered. A simple slap to the back of the slide pushed the extractor over the cartridge rim and fully into the chamber. On two other occasions, the same Black Hills 200-grain SWC load got a bit wonky during chambering and required a full cycling of the slide to clear. The final stoppage was very likely user induced. It was with the 185-grain Golden Saber load. During a string of fire from the bench, the slide lock engaged. I suspect this was because my support thumb contacted the slide lock during recoil.

Overall, I consider this very good performance. Out of nearly 300 rounds fired—with five different loads and bullet weights ranging from 135 to 230 grains—there were only three gun- or ammunition-related stoppages. In addition, all three occurred with the same ammunition. Interestingly, these three stoppages occurred with the sixth round out of the same magazine. I ran another 28 rounds of this ammo through the handgun with the other magazine that was supplied with the pistol and experienced no issues.

I most often carry a well-used, lightweight Browning HiPower that’s been customized by Novaks. At other times, I’m armed with a Wilson Combat EDC-X9 or a Sig Sauer P365. The pistol I have with me largely depends on where I’m going, what I’m doing and what I’m wearing at the time. I also have an exquisitely customized Nighthawk Commander that I carry when I’m in a .45 ACP kind of mood. I expect that will change, because I like the Remington R1 UltraLight Executive better than the Nighthawk. It’s lighter, easier to conceal and more comfortable in the hand. The rounded butt makes a lot of difference in feel and is one of the reasons I’m so fond of a Browning HiPower and the Wilson EDC-X9.

I think the UltraLight Executive is the best R1 Remington has created to date, and I consider it one of the top 1911s you can buy at any price. You can do a lot worse for a lot more money, and you’re cheating yourself if you don’t give one a try. With street prices of less than a grand, this gun is a steal and one I’d bet my life on … which is why it’s been on my side for several months now.

The article originally appeared in Gun Digest the Magazine.