Seattle’s police chief was heckled while she ripped the Capitol Hill Autonomous Zone (CHAZ) following fourth shooting in the area at a press conference Monday.

Chief Carmen Best demanded that people still in the area, also known as the Capitol Hill Occupied Protest (CHOP), leave immediately for the sake of everyone’s safety. A 16-year-old died and a 14-year-old is still being treated following a drive-by shooting that took place early Monday morning in the zone, Seattle police said in a press release Monday.

“It’s very unfortunate that we have yet another murder in this area identified as the CHOP,” Best said. “Two African-American men dead at a place where they claim to be working for Black Lives Matter. But they’re gone. They’re dead now.”

Best added: “We’ve had multiple other incidents. Assault, rape, robbery, and shootings. And so this is something that is going to need to change.” (RELATED: ‘It Highlights Capitalism’s Brutality’: Socialist Seattle City Councilmember Blames Capitalism For Latest CHAZ Shooting)

People can be heard shouting “Black Lives Matter” later in the press conference while Best took questions from reporters. A loud siren-like sound went off at one point during the presser.

“That is so rude,” Best said as the sound interrupted her. “This is what I’m talking about. This kind of behavior is irrational and unacceptable.”

“Two African-American men are dead at a place where they claim to be working for Black Lives Matter.”

People living in CHOP are not cooperating with investigators’ requests for information, according to Best. She said this has been the case with other investigations in the zone.

“We’re asking that people remove themselves from this area for the safety of the people. If they care about people, they’re going to have to try to help us to make it safe,” Best continued. “Enough is enough.”

Demonstrators established CHAZ on June 8 to be a cop-free, six-block protest area in downtown Seattle. Protests have occurred across the country in the wake of the death of George Floyd, a black man who died in Minneapolis police custody after an officer kneeled on his neck on May 25, video of the incident shows.

The city of Seattle began dismantling the area on Friday.

“I’m just concerned about making sure that I’m able to get my officers back into the precinct so that they can respond to calls for service,” Best told ABC News on June 12. “We need to have officers responding to calls in a timely fashion and with the occupation, we’re not able to do so in a timely way.”

However, Democratic Mayor Jenny Durkan said the occupied zone was “more like a block party atmosphere” in a June 11 interview on CNN, the Daily Caller reported. 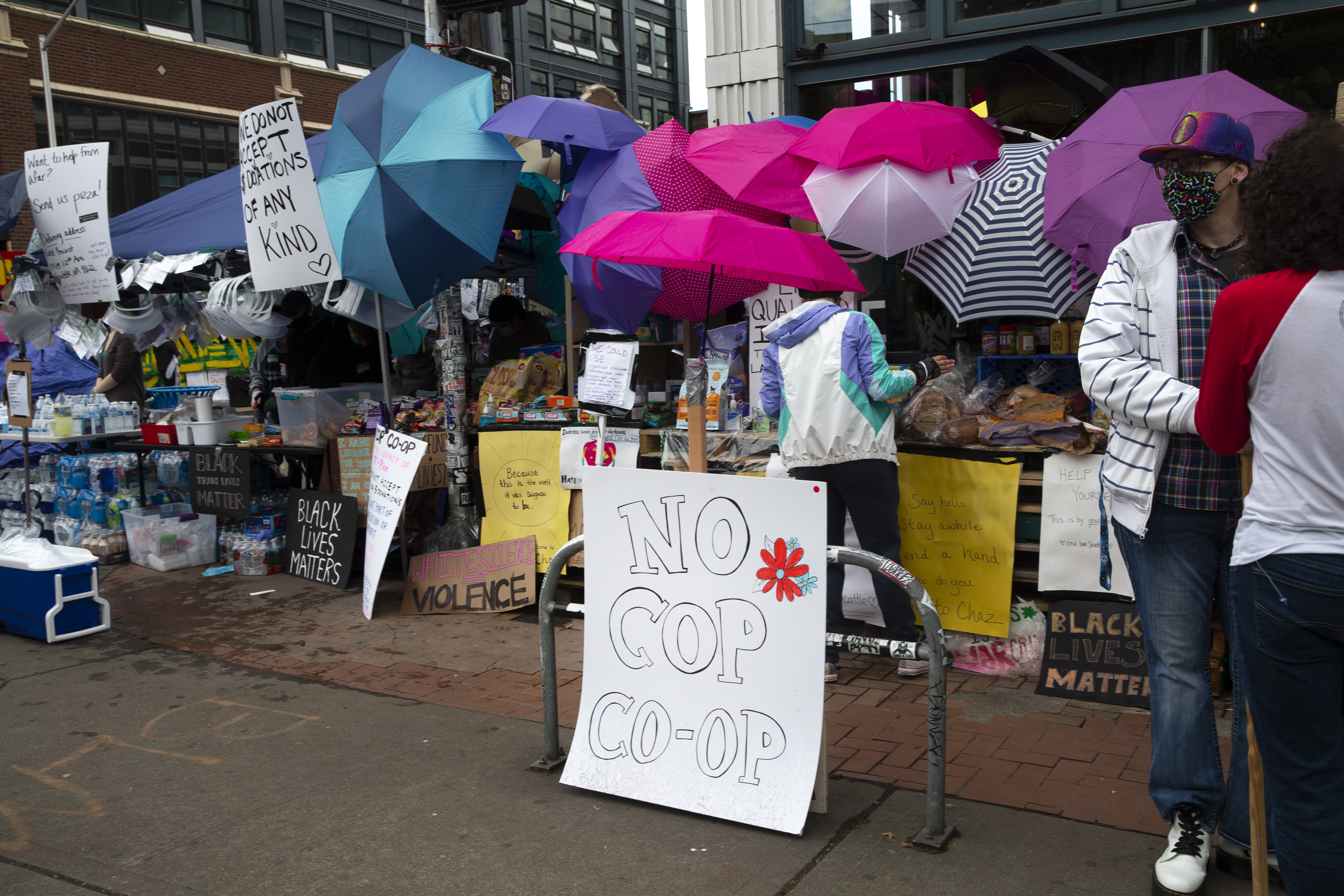 Many stands offering free items have been set up in an area dubbed the Capitol Hill Autonomous Zone (CHAZ) on June 12, 2020 in Seattle.(Photo: Karen Ducey/Getty Images)

Some members of the city council have advocated for the defunding and dismantling of the Seattle police department. Councilmember Kshama Sawant, a member of the Socialist Alternative political party, has led the charge.

“This tragic killing underscores the urgency to Defund police by at least 50 percent,” Sawant tweeted Monday.

Best has said that she is open to police reform and has put forth guidelines for re-envisioning public safety in Seattle in response to the death of Floyd.

“SPD has embraced reform, and internal conversations confirm it is ready to push past the relative comfort of those efforts,” said Best in a June 22 letter to the Seattle community.

Monday’s shooting is just the latest in a series of shootings in the zone. Three shootings were reported last week in the area resulting in one death and multiple injuries, the Daily Caller reported.