Protests and riots across America, sparked by the death of George Floyd, have brought Americans to arm themselves and defend their property.

Here are seven examples of Americans defending their property:

The McCloskeys, whose home resides in a private community in Central West End St. Louis, stood outside the night of June 28 with an AR-15 and pistol facing 300 protesters. The private community’s gate was broken, with protesters marching toward St. Louis Mayor Lyda Krewson’s home, demanding her resignation. The McCloskeys told KMOV4 that they were “in fear for our lives.” The couple is under investigation for “threat of deadly force” by the St. Louis circuit attorney.

Looters in Santa Monica were dissuaded by the sight of the armed owner liquor store owner and his friends standing outside his store, Broadway Wine & Spirits according to CBSN Los Angeles. After hearing reports of looting and fires in the rest of the city the owner took action and potentially saved his business. (RELATED: Gun Sales In 2020 Are Absolutely Crushing It)

As looters attempted to break into Corbo’s Bakery, they were warned by owner Joe Corbo and his two sons who armed themselves, FOX 8 reported May 31. “We weren’t there to hurt anybody or cause a problem, we were just protecting our business,” Co-owner Selena Corbo told Fox8. Protesters then moved on, but not without smashing one of the bakery’s windows.

In 1992, protesters in Los Angeles looted or burned hundreds of businesses in Koreatown. Countless business owners, seeing the absence of police, armed themselves and defended their stores, many from rooftops. 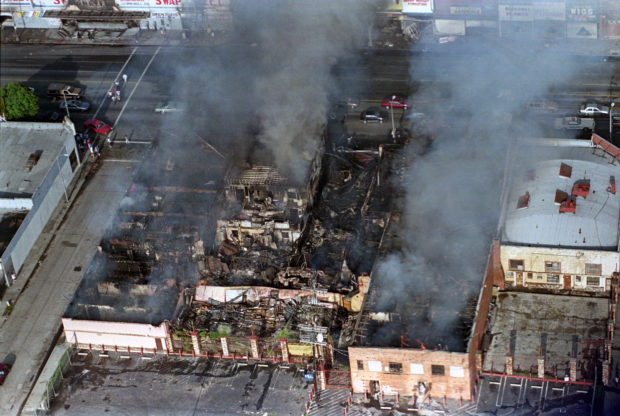 Four men broke into the gun shop Firing Lane early June 2 and were met by gunfire on the second floor by the shop owner. Three shots were fired leaving one robber dead and the other wounded, investigators told FOX 29. Philadelphia District Attorney Larry Krasner called the owner’s actions “justified.”

In Scottsdale, Arizona a jewelry store was spared from looting and vandalism after the owner’s son and others stood at the store armed, 12 News reported May 31. Many other stores on Scottsdale’s 5th Avenue were looted. “We weren’t here to hurt anybody…after seeing exactly what happened to the Apple store, this isn’t protesting, this isn’t rioting, this is crime,” the owner’s son told 12 News.

Residents of Snohomish, Washington armed themselves waiting along the town’s main street after hearing rumors protesters were on their way, according to the Seattle Times. While no violent confrontations occurred, there was a “credible threat of civil unrest intent on causing damage to this amazing community,” the Marysville Police, which assisted in patrols, said on Twitter.