Two federal judges, citing concerns about the coronavirus pandemic, last month ordered the early release of two convicted sex offenders from the Georgia prison that will soon house Roger Stone, the longtime Trump confidante who was sentenced to 40 months in jail on charges stemming from the special counsel’s Trump-Russia probe.

The inmates won their reprieve despite there being no cases at the time of coronavirus at the medium-security facility in Jesup, Georgia. Since then, three inmates at the facility have tested positive for coronavirus, according to the Bureau of Prisons.

Stone’s lawyers noted the positive cases on Monday in a filing to the federal appeals court in Washington, D.C. Stone is seeking a 45-day delay in reporting to the Jesup facility, though his ultimate hope is that President Donald Trump will grant him a pardon.

“I want the President to know that I have, in good faith, exhausted all of my legal remedies and that only an act of clemency by the President will provide Justice in my case,” Stone said in a statement to the Daily Caller News Foundation announcing his appeal.

Judge Amy Berman Jackson on June 26 ordered Stone to report to prison on July 14. Stone, 67, had requested a 60-day extension on his prison reporting date, saying that he suffers from asthma and is at risk for severe complications should he come down with coronavirus. (RELATED: Michael Cohen, Who Was Released From Prison Because Of COVID Fears, Is Spotting Eating At NYC Restaurant)

Jackson granted only a partial delay, saying that the Jesup prison did not have any reported cases of coronavirus. The Justice Department has placed 4,600 federal inmates on home confinement since the start of the pandemic.

Stone’s appeal referred to two inmates recently released from Jesup, though the filing did not address the charges against the two felons, Michael Asher and James Feucht.

Asher, 54, began serving a 155 month sentence in 2013 after being convicted of possession of 5,000 images and 80 videos of child pornography. He argued for an early release saying he has Parkinson’s disease and is confined to a wheel chair, making him vulnerable to severe illness from coronavirus.

U.S. District Judge Mark Cohen granted Asher’s request on June 15, citing Asher’s claim that while there were no reported cases at Jesup at the time, he saw inmates leaving the facility and returning after work without wearing masks or other protective gear. Asher also asserted that Jesup staff rarely wore masks, even when preparing food.

Feucht, 63, had completed 131 months of a 151-month sentence on charges that he distributed child pornography. He suffers from diabetes, obesity hypertension and other conditions.

U.S. District Judge Donald Middlebrooks acknowledged in his ruling in the case that Feucht poses a greater risk of reoffending. But he said that Feucht should be released early because of the pandemic and because he has served a vast majority of his sentence.

“I agree, of course, that distribution and possession of child pornography is a serious offense,” Middlebrooks said in a ruling on May 27.

“I also acknowledge that Defendant will be more easily able to reoffend once released than he would be if he remained incarcerated for his full sentence. However, Defendant has already served over 112 months, which constitutes approximately 86% of his sentence.” 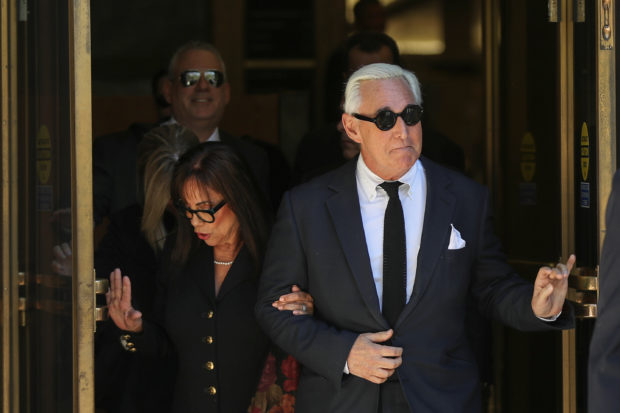 Other Trumpworld figures have been released from prison early because of the pandemic.

Paul Manafort, the former Trump campaign chairman and former Stone business partner, was released from prison to home confinement on May 13. The 71-year-old operative, who is in poor health, was serving a seven-year prison sentence on money laundering and tax evasion charges that stemmed from the special counsel’s investigation.

Michael Cohen, a former lawyer for Trump, was released on furlough on May 20 from a minimum-security facility in Otisville, New York. He was spotted eating at a high-end French restaurant in New York City with his wife and two friends last Thursday, The New York Post reported.

Stone alleged that the release of Cohen and Avenatti is evidence of a double standard in his case.

“Evidently the DOJ and U.S. Bureau of Prisons policy of moving inmates convicted of non-violent offenses from incarceration to the safety of home confinement because of the dangers of Covid-19 applies to Michael Cohen and Michael Avenatti, but not to Roger Stone,” Stone told the DCNF.

“Is it coincidental that those who attacked Trump have been released from prison even though they don’t meet the DOJ guidelines for compassionate release?” he asked.

Stone has deployed multiple tactics to try to get his conviction tossed out, his prison reporting date delayed, or to convince Trump to issue a pardon.

Trump has said that Stone does not need to fear serving jail time, while suggesting that he would pardon his longtime friend. But so far, the president hasn’t pulled the trigger.

A federal jury convicted Stone on Nov. 15, 2019 on charges that he made false statements to Congress, that he obstructed a congressional investigation, and that he tampered with a witness in the investigation, Stone’s longtime acquaintance Randy Credico.

Prosecutors alleged that Stone lied to Congress when he denied speaking with members of the Trump campaign about WikiLeaks during the 2016 campaign. The special counsel’s office and House Democrats investigated whether Stone served as a conduit between the Trump campaign and WikiLeaks, which published emails that Russian hackers stole from Democrats.

The special counsel never found evidence that Stone communicated directly with WikiLeaks about the emails. A report of the investigation also said that no Trump associates took part in the email hacks or dissemination of the emails.

Stone has asserted that he was the victim of a political witch hunt because of his longstanding ties to Trump.

Jackson denied Stone’s request earlier this year for a new trial based on comments that the lead juror at Stone’s trial made on social media regarding Trump and Trump supporters. In one post, the juror called all Trump supporters racist. She also endorsed a tweet that praised the FBI arrest of Stone in January 2019.

“This is a case in which I was charged on politically motivated, fabricated charges and was denied a fair trial by an unbiased judge, an honest jury, and uncorrupted and non political prosecutors,” Stone said in a statement.