This piece is the second installment of a two-part story. These articles document a Venezuelan journalist’s struggle to flee the failing state and survive in a place where journalists are often under serious threat of bodily harm. Some names have been changed in order to protect those involved.

My decision to escape Venezuela was related to what I had feared for the last five years: the possibility that Mario Vega would eventually gain enough power to take revenge for the tablet becoming a reality.

Every two months, I called a contact close to Vega to hear about his current political connections. Given his notoriety for harming those who could represent a threat to him, I knew that once he had any kind of alliance with a powerful member of the chavismo, his attention was going to turn to me.

In December 2018, a source inside the regime told me that Vega was under the wing of Maduro’s son “Little Nicolas,” who — in addition to his gaffes on national television — was known for being the son of a third-world tyrant and friends with a number of Venezuelan oligarchs.

The first event that demonstrated Vega’s willingness to kill me was at an anti-Maduro protest near my house in January 2019, where a group of colectivo members started to attack the demonstrators. 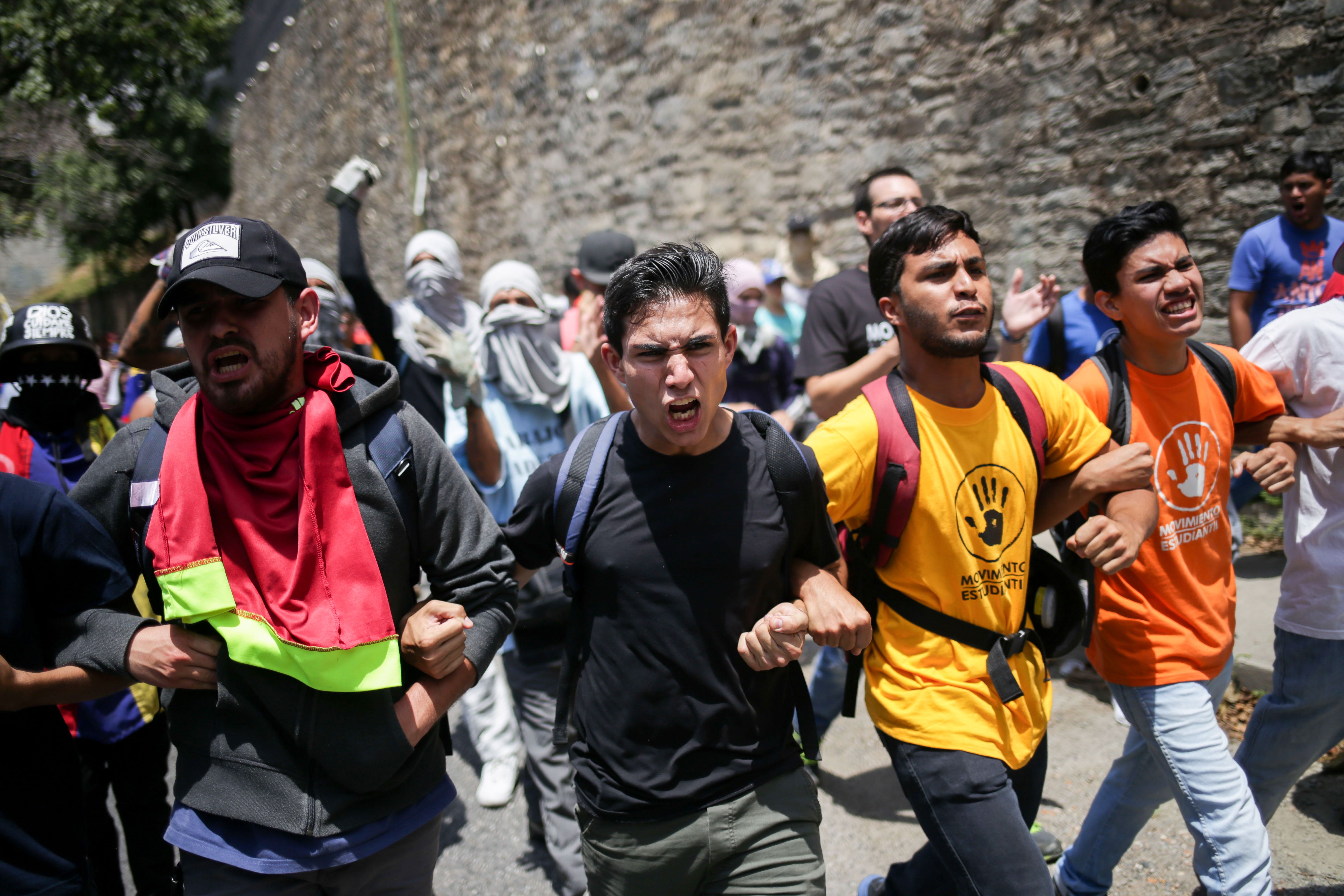 I was covering the protest with a freelance photographer when four colectivo men brutally beat the photographer with baseball bats. One of them pointed his gun at me and said: “This is what happens when you watch what you’re not supposed to. This is what is waiting for you. We’re just waiting for the exact order to kill you.”

On a Friday night two weeks later, I was on a date with a girl when a police car asked me to stop in the middle of Maracaibo’s main highway. I immediately knew it was connected to Vega.

“Look what we have here, it is Luis Francisco Orozco,” the police officer said. “I hope you’re having a good time writing the crap you write about your country.”

“I didn’t know you could read English, but in any case, I only write about the nightmare that the people you are protecting put us in,” I responded.

“I don’t know Luis, but the truth is you’ve been messing with the wrong man. But anyway, I think you should get going, these streets are quite dangerous you know. It would be a shame if someone robs you,” the police officer told me before getting in his car and leaving.

Five minutes later, two men in a motorcycle pointed a small shotgun at me and the girl I was dating, stole our smartphones and yelled “You soon will be a dead man, Luis.”

The next day, my contact in the Bolivarian National Intelligence Service (SEBIN) called me. He said the words I never wanted to hear.

“Take full precautions Luis, while it would bring a lot of unwanted attention to kill a journalist, Mario really wants to hurt you, and many people on the police and colectivos want him to owe them a favor,” he said. “What’s worse, these people tend to be quite sloppy.”

Once I hung the phone, I started to prepare my escape to Colombia. I had already visited a few times and had some contacts who would facilitate my exile.

My contact inside the regime gave me the number of an armed forces sergeant who made regular trips to the border. The sergeant also offered to help others who were being persecuted by the police or any regime’s security agency. I called him and he said he could make the trip in 10 days. (RELATED: US Sanctions Iranian Ship Captains For Delivering Oil To Venezuela)

I accepted, since it was my only chance of leaving. I didn’t say anything to anyone, not even my family or the media outlets I was working with. 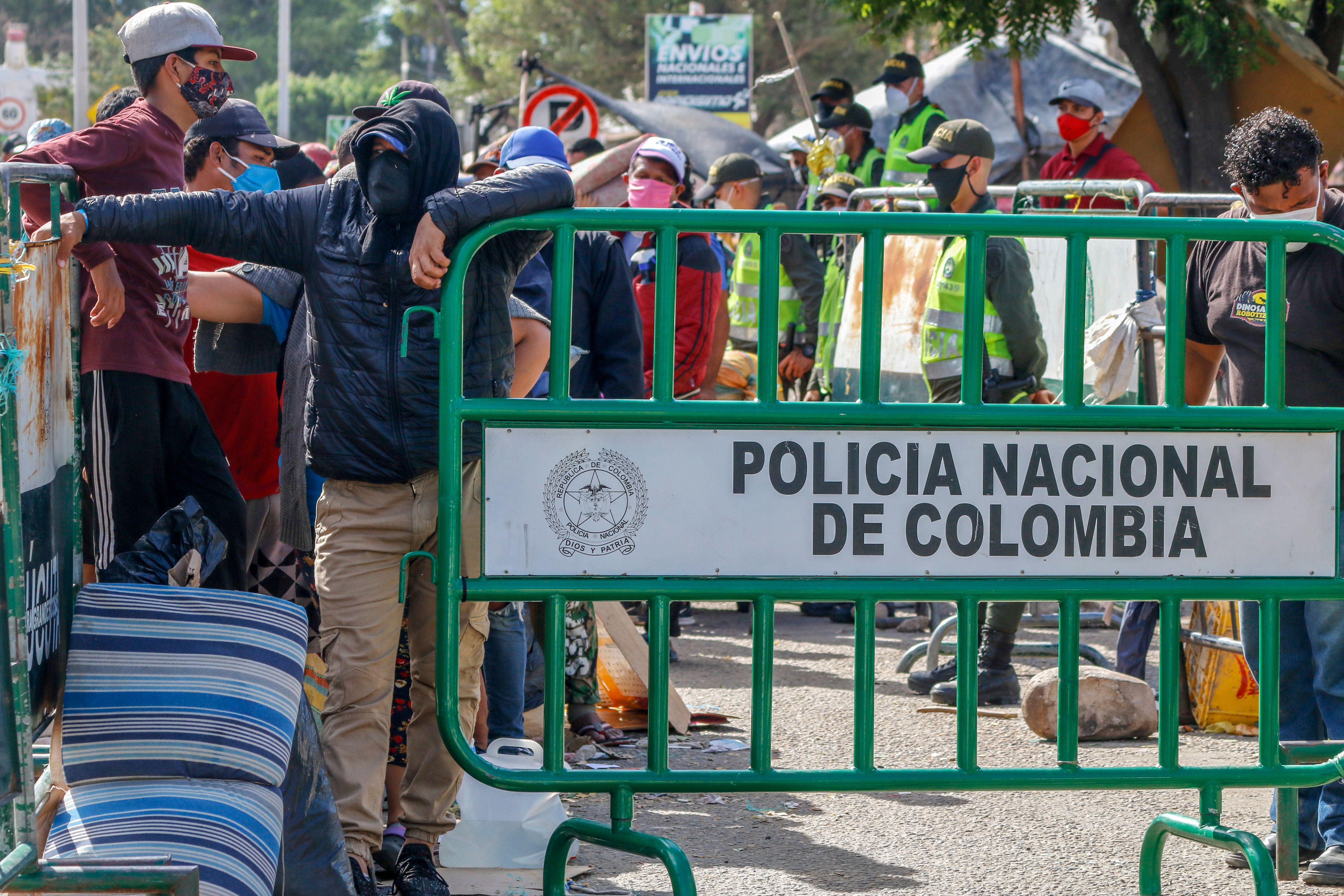 Venezuelans queue as they are being transferred from the Simon Bolivar international crossing point to the Tienditas International Bridge where they will be housed in tents, in Cucuta, Colombia, on the border with Venezuela, on June 14, 2020. – Hundreds of Venezuelans who fled to neighbouring Colombia during their country’s economic crisis are now returning home, pushed by the deadly novel coronavirus and Colombia’s own pandemic woes. Although the border is officially closed as a measure taken to halt the spread of coronavirus, Colombia opened a “humanitarian corridor”. (SCHNEYDER MENDOZA/AFP via Getty Images)

At that moment, when the decision was finally made and I needed to think about my moves for the next 10 days, Venezuela sunk into an unprecedented level of chaos and darkness as the result of a national week-long power outage.

The second day of the so-called “apagón” was supposed to be the day I died.

As I was looking for gasoline for my power generator, three colectivo men stopped my car by abruptly putting their truck ahead of mine. Two of them had baseball bats and the other had a gun. (RELATED: Trump Admin Indicts Venezuelan President Nicolas Maduro On Drug Trafficking Charges)

For reasons I still can’t explain, once the man with the gun said, “Now you’re gonna give us your car,” I drove away as quickly as possible. The car was shot five times, with four of the bullets hitting the taillight, one the back window and another the back passenger’s seat.

Without thinking, I went to my parents’ place, got some clothes, hid the car in a cousin’s house and stayed at a cheap motel until the power was restored in the whole country. When the electricity was back, the hotel manager told us we need to leave. I had three days to keep myself safe before making my escape. I ended up taking back my car and hiding in the motel of a neighboring town.

I contacted the sergeant who was going to take me to the border, and he told me that the trip was scheduled for Wednesday at 8 a.m. He woke me up at 1 a.m. that day saying, “Everything has to be now. There’s a change of plans, and the conditions of your trip can only be made right now or in a month.” He told me he was going to pick me up at my house in an hour. 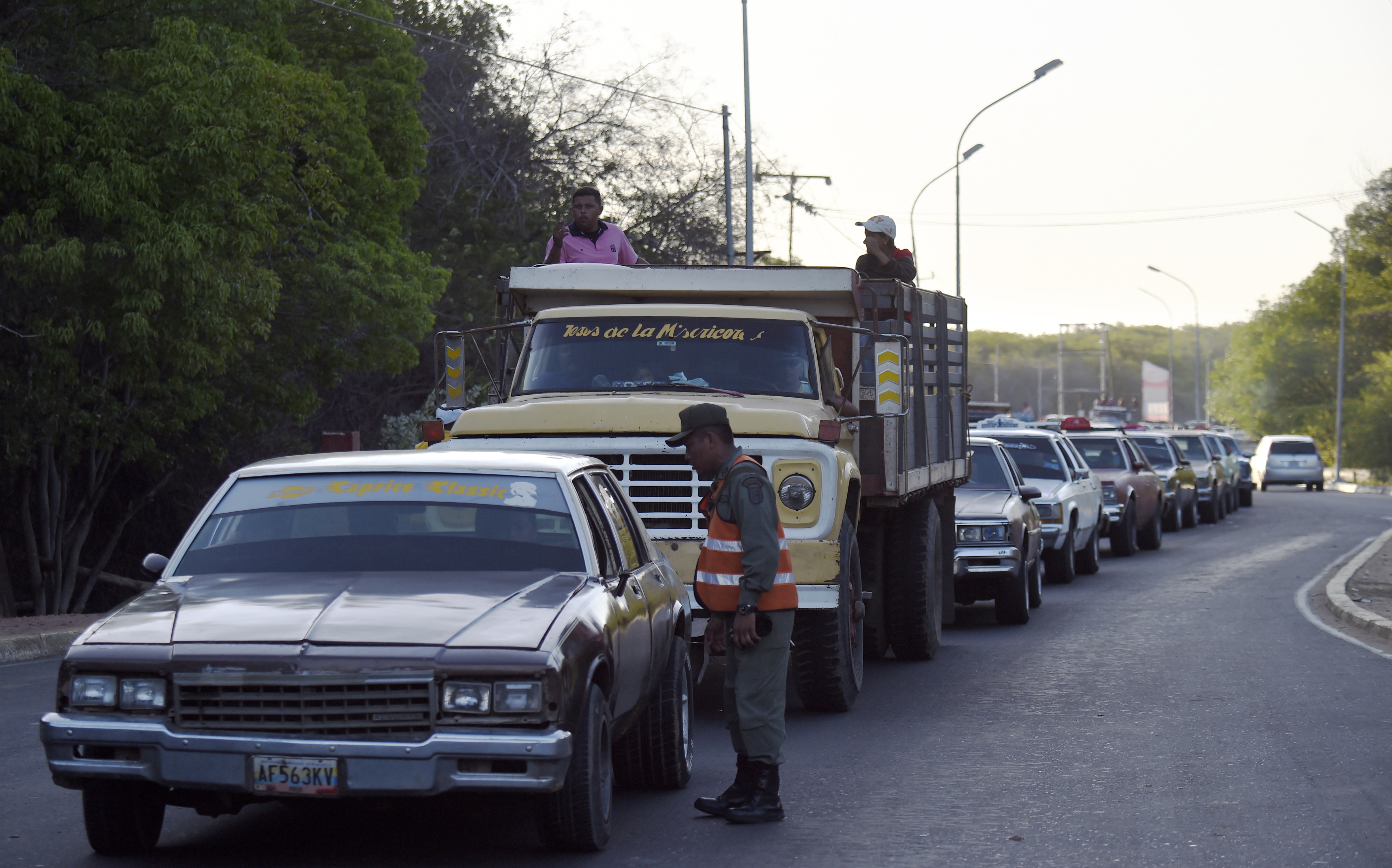 Members of the Venezuelan national guard are pictured at a checkpoint in the municipality of Limon, Zulia State, Venezuela, in the border with Colombia, on Sept. 10, 2015. On Aug. 19 Venezuela President Nicolas Maduro closed part of the border with Colombia and ordered the expulsion of some 1,500 Colombians living in Venezuela. Another 18,500 have fled, the United Nations said earlier this week. (JUAN BARRETO/AFP via Getty Images)

My plan was to get to the border and take a bus to the Colombian coastal city of Riohacha to catch a flight I had already booked to Medellin.

Once I got to my house, I took a bag and put in some clothes and books. The sergeant arrived sooner than he had said he would, and explained the plan for my escape. He would do the talking in every single checkpoint. We had to travel through the whole indigenous peninsula of La Guajira before reaching the so-called “line,” which is one of the two main borders between Venezuela and Colombia. We would have to go through Santa Cruz, El Moján, Río Limón, Sinamaica, Paraguaipoa and Los Filudos before reaching the line.

Soon before reaching the first of these six towns, the sergeant said, “I don’t know why you are escaping, and I don’t care. People like you are the cornerstone of my business. See, a lot of Venezuelans may be sick and tired about the crisis and hunger, but everyone needs to grow up and look for the benefits of this situation in order to succeed. I mean, look at me, I’m getting a decent amount of money for taking people like you who need to escape to the border. I don’t know about you, little brother, but this crisis opened the door for me. I’m living the life.” 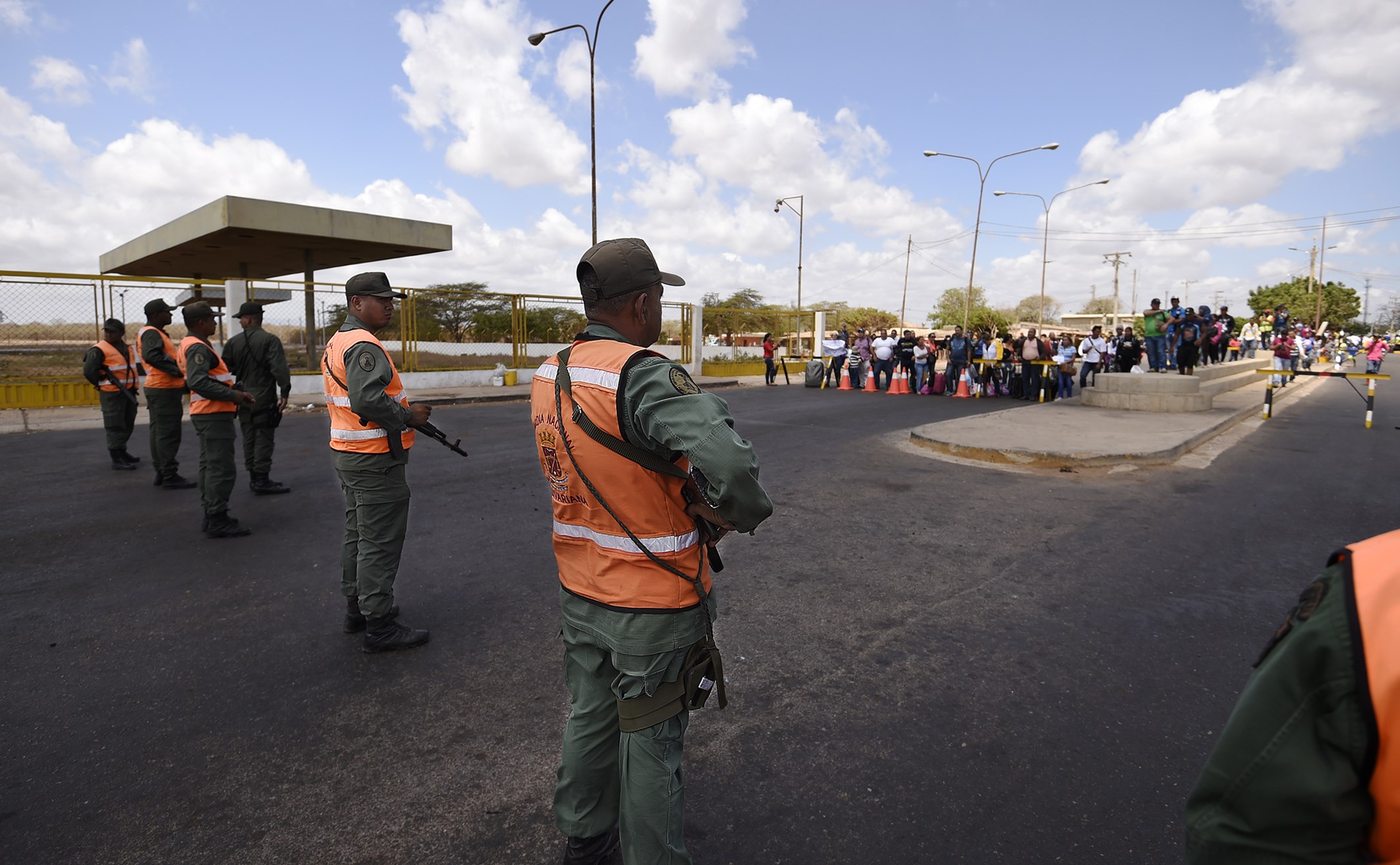 Members of the national guard stand at a checkpoint in Paraguachon, Zulia state, Venezuela, in the border with Colombia on Sept. 9, 2015. Venezuela’s President Nicolas Maduro late Monday said he had ordered more of his country’s vast border with Colombia closed amid a diplomatic crisis over deportations and smuggling. (JUAN BARRETO/AFP via Getty Images)

I stayed silent during the whole trip, watching how the sergeant only had to show his credentials at each checkpoint. At the checkpoint between Sinamaica and Paraguaipoa, however, he had to get out of the car and talk for about 45 minutes with the three soldiers on duty. He then got back into the car and kept driving to the line.

“It seems some people know you,” the sergeant said. “I had to convince them of letting me go and take you to the border, getting sure they wouldn’t say anything, of course.”

“By offering a little bite of this business, meaning that you will have to pay me double, little brother,” came the reply.

Once we got to the line at 6 a.m., the sergeant took my passport and he personally went to the Venezuelan immigration office to seal it.

He then gave it to me, saying, “From here on you will be by yourself. I hope this crisis continues so more people like you have to escape, and I can expand my business. Naturally, I also hope this situation eventually ends so all of you can come back.”

I paid him $400 in total. Then I sealed my passport on the Colombian immigration office, and paid $50 to a 1987 Jeep Wagoneer that took me to the Riohacha airport, where I waited until 6 p.m. to take the flight to Medellin.

I chose this city not because of its cosmopolitan aesthetic or its weather, but because I have some friends there. It’s also the city that the regime’s intelligence agency hasn’t been able to fully penetrate, unlike the capital, Bogota, or the border regions.

I don’t know how long this exile will last.

I don’t know if I will see my family again.

I just know that the only way I can fight against this tyranny is doing the two most difficult things you can do in a context of violence and censorship: keep doing my job and exposing the truth.

Luis Francisco Orozco is a Venezuelan journalist and political analyst. Find Luis on Twitter at @LForzco.