Hotels that were once rented for $300 a night are operating as homeless shelters, as the city experiences a crime surge compounded by the pandemic that has killed 18,708 people as of Monday, ABC 7 reported.

The high-end Cachet Boutique Hotel is now equipped with a metal detector and security guards in the lobby, according to ABC 7. Many neighbors were reportedly surprised to hear that these buildings had become shelters.

One woman told reporters that although she’s had Mace since moving to the city, she’s never had to carry in her own building, where the Washington Jefferson Hotel is also located and is now housing homeless single men. (RELATED: New York City Shootings Surge 358% Compared To Last Year Amid Disbanding Of Anti-Crime Police Unit) 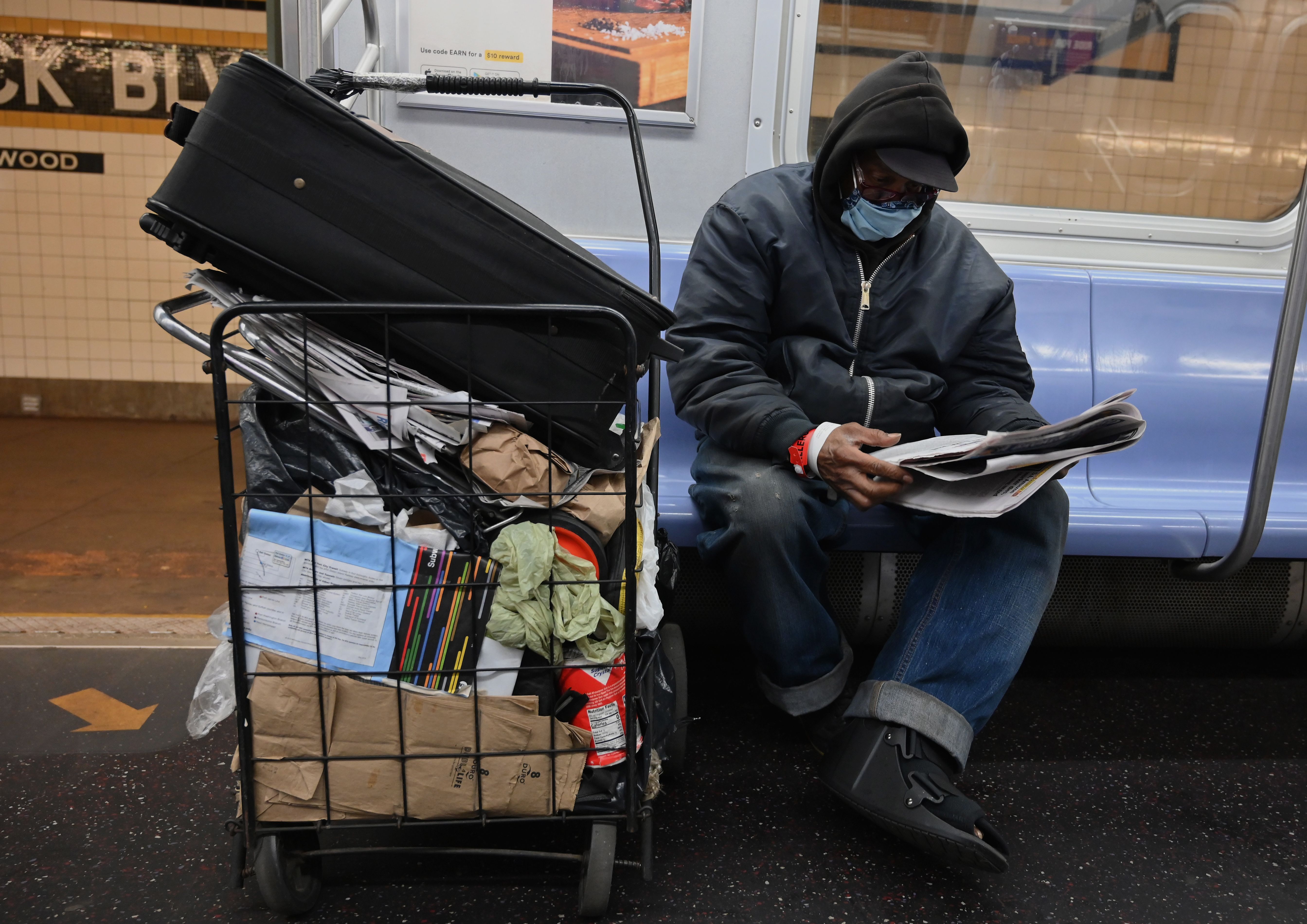 Damon, 67 who is homeless reads a newspaper on a subway train on May 7, 2020 in New York City. (Photo by ANGELA WEISS/AFP via Getty Images)

“All of a sudden, I walk downstairs one day, there’s busloads of men getting off the bus coming into the hotel with bags of clothes,” Crystal Byrd told ABC 7. “I know they’re bags of clothes because the bags were transparent.”

Homeless tenants confirmed to reporters that the hotel is a shelter.

An analysis found that New Yorkers experiencing homelessness died from coronavirus at a rate 61% higher than the general population, but many residents and workers at these shelters were kept in the dark about the full impact.

The Department of Homeless Services placed over 11,000 people in hotels in early June, but infection reporting at these shelters is opaque and concealed in a culture of “don’t ask, don’t tell,” a shelter employee told The City.

The Department confirmed to ABC 7 that the agency now operated 139 hotels as shelters across the city, and that the program is expanding.

Scott Sobol, co-chair of the Hell’s Kitchen Block Association, told ABC 7 that he felt neighbors should have been notified. 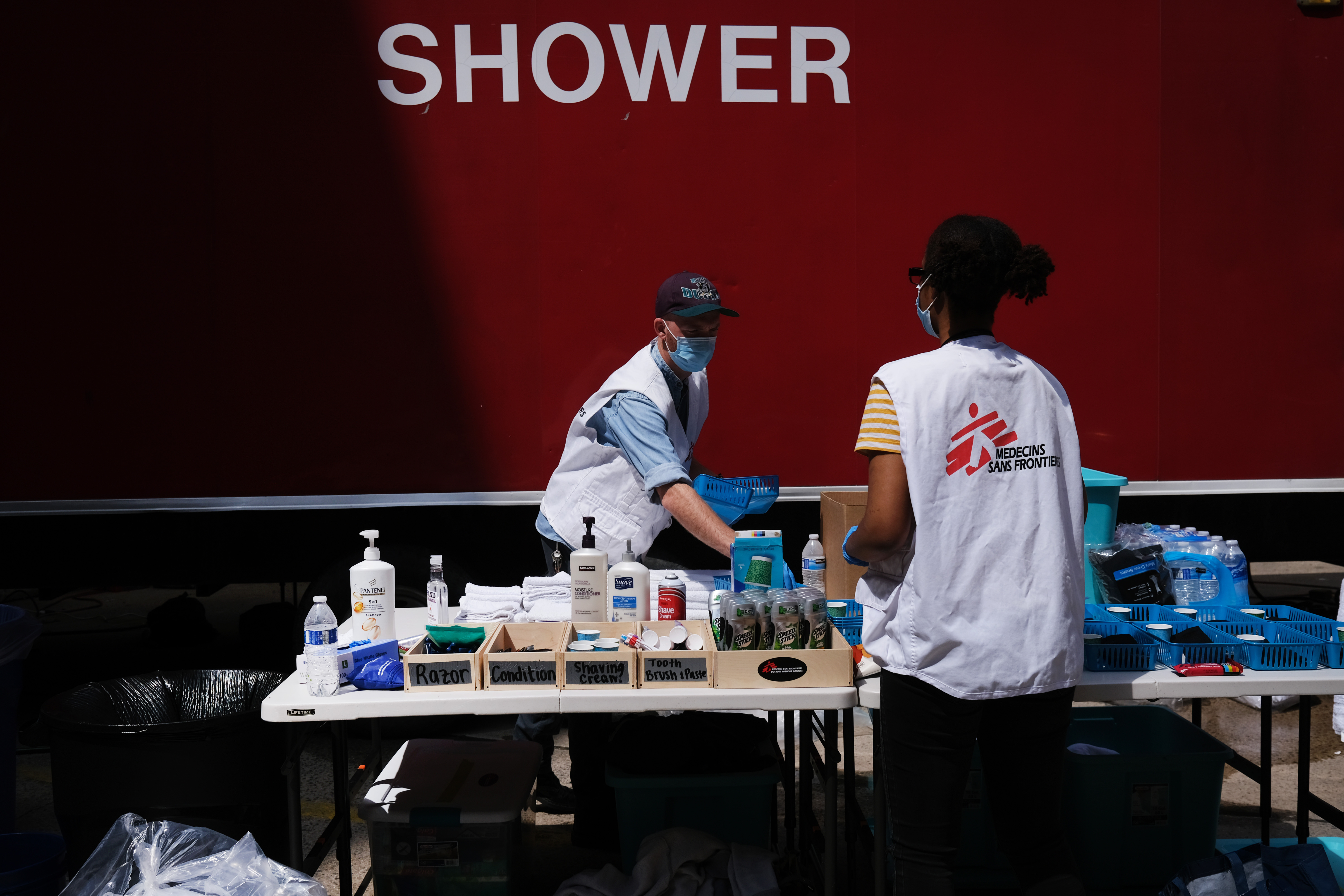 Employees prepare free toiletries at a Doctors Without Borders/Médecins Sans Frontières (MSF) temporary shower trailer in Manhattan for the homeless and other vulnerable communities on May 07, 2020 in New York City. (Photo by Spencer Platt/Getty Images)

“Why won’t they tell us?” Sobol said. “Why is it a secret? Ultimately, we’re the taxpayers. We’re the ones funding these programs.”

Corey Johnson, speaker of the New York City Council, told ABC 7 that the “De Blasio administration can and must do better” in solving the homelessness crisis.

“Our city is badly failing on this issue,” Johnson said. “This awful pandemic has exposed many of the worst problems our city had already been dealing with for years, and the homelessness crisis is a truly painful example.”

“The de Blasio administration can and must do better. My office is working around the clock with business owners, Hell’s Kitchen residents, DHS, and service providers to improve things, and we will continue to do so until we solve this problem,” Johnson continued.