When I was released from eleven months in a Socialist Republic of Vietnam re-education prison in 1984, after being falsely charged with spying for the CIA, reporters and members of DIA’s Joint Casualty Resolution Center (JCRC)/POW/MIA Div. , US State Department and the British ambassador to Thailand, were amazed at the condition in which I arrived at Don Muaung Airport. As Vice Consul Patricia Langford would later comment, “ We expected had expected a frazzled, wigged-out ex-prisoner, but we were greeted by an Errol Flynn.”

Six years later, I returned from fighting in Reagan’s Secret War to stop Fidel and Raoul Castro’s communist insurgency in Latin America and went to Alaska for a year of solitude to deal with the psychological effects of the previous five years of heavy combat. Living in Alaska, alone in a cabin, including the repressive cold and dark of winter, for a year, was a piece of cake, and just as healing and empowering as I had previously made my experience in that Vietnamese prison years before.

When the world was pretty much put on lock down this year, it surprisingly didn’t hit me as much as it has many. For the world, it has been so bad that the suicide casualty numbers have reached up to a level in some countries surpassing those for the CCP Virus itself. Suicide, overdose; these have been the reasons given for many deaths not directly resulting from CCP Virus infection, to that point that even President Trump commented on it.

How is it that I’ve been able to not only survive, but thrive during this lockdown? How was it that British citizen Richard Knight, with whom I was captured in 1983, basically lost his mind, and often entertained suicide, even looking at how he could attempt such a death: he was the only one allowed to see a member of his country’s foreign service, as the US hadn’t had an embassy in Vietnam since 1975 at that time—this is why those who greeted me at Don Muaung had thought I was in the same condition as he. When he told me that he was going to slit his own throat, I knew I was in trouble and had to ask for isolation again—during my eleven months, I was held in isolation for a total of seven months.

One of the tools I learned to use, which I often suggested to those I later aided as a drug and alcohol counselor specializing in helping those dealing with the symptoms of post-traumatic stress at Friendship House Association of American Indians in San Francisco, from 1992 to 2000, was exercise. Exercise clears the mind, increases the endorphins effecting the pleasure centers of the mind, and offers over all well-being.

Another tool I used is what I call “success focus engineering.” No matter what, I was going to get out of that prison (whether through escape; my ransom being paid; or, being shot and dying while trying to escape—I paid the price of physical abuse for two unsuccessful attempts), and when I got out of that prison, I was going to hit the ground running based on all the plans I had running around in my mind in prison. It was like when I returned from Alaska and achieved a university degree in three years, when others complained they couldn’t get a bachelor’s in under five.

This is the hardest one for many. From my observations of comedy-actor turned treasure hunter Richard Knight, whose voyage to Vietnam I used to investigate the truth of what happened to American POW/MIAs lost in Vietnam, the hardest thing for him to do was confront himself and befriend who he had become. For many, the hardest one to like, and respect is the individual, him or herself. Most of all, Knight couldn’t believe that all this had happened to him—destroy the victim attitude, or be destroyed by it. 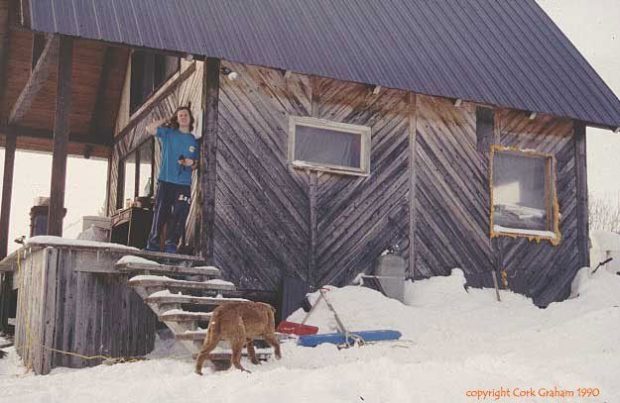 The author living in an A-frame on personal lockdown in Alaska to confront the symptoms of his combat-related PTS from Central America.

Lockdown forces you to either confront and befriend your inner and outer self-image, or it causes you to try to destroy yourself through a variety of self-destructive thoughts and actions: playing the victim and feeling powerless is the epitome me of this. It leads to outward aggression, and, or, self-destruction. We’ve seen this in the news with increased murders, suicides and crimes.

One more tool I’ve suggested is used by members of various special operations units, snipers and competitive shooters: meditation and controlled breathing. These are solid tools for opening and directing the mind toward empowerment. The two together lead to clearing of the mind of clutter and self-destructive thoughts, and enable the practitioner to focus and work toward goals.

Right now, for many, lockdown seems like prison. More importantly it’s going to be a whole new world—it’s already a whole new world—and this time during lockdown is an opportunity to get squared away and prepare for what’s coming biologically (likely another wave), politically (a kinetic war with China for unleashing and lying about a clearly human-modified bat virus), and economically (once the government money stops and the jobs are gone, we’ll be in conditions worse than that which our parents endured in the 1930s).

Use your time wisely: Don’t waste this opportunity to get ahead of curve during this global economic and societal reset.