The New York Times is standing by a February 2017 report alleging that Trump associates were in communication with Russian intelligence officers, even after the release of an internal FBI memo that identified numerous inaccuracies in the story.

“We stand by our reporting,” New York Times spokeswoman Eileen Murphy told her own paper for its report on the newly released documents.

Attorney General William Barr declassified two documents this week related to the FBI’s investigation of the Trump campaign. One released Friday is a 57-page memo of interviews that dossier author Christopher Steele’s primary source conducted with the FBI in January 2017.

The second is former FBI official Peter Strzok’s annotation of a Feb. 14, 2017, report that said four American officials claimed that authorities had intercepted communications and call logs of Trump advisers speaking with Russian intelligence. (RELATED: The New York Times Has A History Of Reaching Too Far On Intel Leaks)

“This statement is inaccurate and misleading as written,” Strzok wrote in reference to opening paragraph of the Times story. “We have not seen evidence of any individuals affiliated with the Trump team in contact with [Intelligence Officers].” 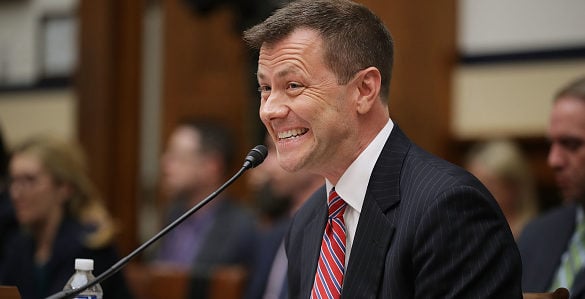 Strzok, who was the FBI’s lead investigator on Crossfire Hurricane, the name for the Trump-Russia probe, poured cold water on other aspects of the Times report, including that investigators were sifting through a vast trove of call records and that Trump confidant Roger Stone was under investigation at the time.

The Times story advanced the prevailing narrative at the time that the Trump campaign may have conspired with the Kremlin to influence the 2016 election. The story also hit a day after Michael Flynn resigned as national security adviser because of a scandal involving phone calls he had with Russian ambassador Sergey Kislyak in December 2016.

Strzok was aware of those calls because the FBI obtained a transcript of them through surveillance of Kislyak.

Murphy, the Times spokeswoman, did not go into detail about why the paper is sticking by the story in light of the new memo.

The Times has recently come under scrutiny for two other reports regarding Russia.

The paper reported on June 26 that President Donald Trump was briefed in March on intelligence that Russian intelligence operatives were paying Taliban fighters to kill U.S. troops in Afghanistan. The White House vehemently denied that Trump was told about the intelligence.

Three days later, The Times reported that the intelligence was included in a written briefing book and that it was unclear whether the information was verbally communicated to Trump.