The National Shooting Sports Foundation, the trade association for the firearm industry, surveyed likely voters in 18 election battleground states and learned that enforcing existing gun laws and protecting lawful firearms sales is on the forefront of voters’ minds. The survey results can be found here, at NSSF’s website.

NSSF learned that 94 percent surveyed are very likely to vote. Nearly three quarters responded they would be more likely to support a political candidate that supported true firearm safety programs. Nearly 60 percent believe a ban on semiautomatic Modern Sporting Rifles (MSRs) would not reduce crime in their community and more than half said law-abiding citizens should be able to choose the type of firearm and amount of legal ammunition for lawful use. More than half also oppose a ban on MSRs. 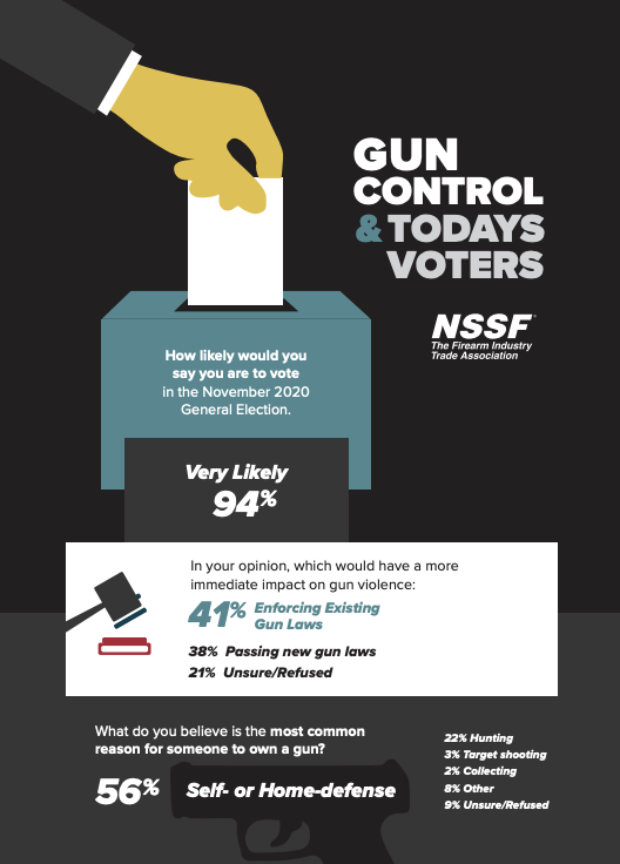 More than half believe self-defense is the primary motivation for firearm ownership. Nearly half surveyed said magazine capacity limits for self-defense would have no effect on crime reduction. Forty-one percent said enforcing existing laws would have an immediate impact on reducing criminal misuse of firearms.

“The survey results are informative to both policy makers and the firearm industry. The results tell us Americans want their right to purchase the firearm of their choice, especially when it comes to their personal safety,” said Lawrence G. Keane, NSSF Senior Vice President and General Counsel. “These results also tell us that enforcing existing laws is a better use of public resources than efforts to restrict the rights of law-abiding citizens. Those likely voters are telling us they want to be able to purchase what they believe will meet their needs without onerous government interference.”

NSSF reported in December 2019 that more than 423 million firearms are in civilian ownership, according to data reported in the ATF’s Firearms Commerce Report in the United States 2019 report and including the preliminary 2018 Annual Firearms Manufacturing and Exportation Report (AFMER) figures and industry estimates. Approximately 17.7 million Modern Sporting Rifles (MSRs) were produced in the United States or imported between 1990-2017. The MSR is the most-popular selling centerfire rifle in America, accounting for nearly half of rifles produced.

Since January 2020, more than 10.3 million background checks have been conducted for the sale of a firearm and NSSF retailer surveys showed that between March and May, 2.5 million were first-time gun buyers.

NSSF is the trade association for the firearm industry. Its mission is to promote, protect and preserve hunting and the shooting sports. Formed in 1961, NSSF has a membership of thousands of manufacturers, distributors, firearms retailers, shooting ranges, sportsmen’s organizations and publishers nationwide. For more information, log on to www.nssf.org.