Ernst introduced the “Ending Taxpayer Funding of Anarchy Act,” which aims to restrict federal funding in “anarchist jurisdictions,” in June. The bill defines such a jurisdiction as an area where city or local governments give its power to a non-government entity and ultimately do not allow fire, medical or police services.

The Iowa senator, along with 29 other colleagues, signed a bicameral letter Wednesday continuing to push the bill. The letter, sent to the Office of Management and Budget (OMB), urged “the federal government” to “ensure judicious and lawful use of taxpayer funds.”

Ernst spoke to the Daily Caller about her reasons behind pushing the bill, saying that “law and order” must be “restored.”

“It has gone on for too long and it’s too much,” Ernst said. “So, we want to make sure that there is peace across the United States and that law and order is restored. You know, enough is enough, so what I’ve decided is that a way to be effective is just to deny taxpayer – federal taxpayer dollars – for these areas that are continuing to allow anarchy.”

“And, we want, of course peaceful protests, we encourage dialogue, that’s what we want, that’s what I support. But we don’t want anarchy. What I see is not an effort to talk about racial injustice, I see this as just an expression of hatred towards the United States.”

While the bill will not be retroactive and affect areas like Seattle, whose no-cop zone has been dismantled, it would restrict federal funding to future cities and state governments that allow these zones going forward. The Wednesday letter cites Seattle’s zone – later renamed the Capitol Hill Occupied Protest – as an example of why the Iowa senator and others feel this bill is necessary.

“In Seattle, where an ‘autonomous zone’ persisted for weeks and was only stopped after a string of shootings and murders, local officials’ abysmal judgment has a budgetary effect, as the city wrestles with a $300 million revenue shortfall,” according to the letter. Law abiding citizens should not have to pay for their abdication of responsibility. We ask that you scrutinize any future federal funding that flows to such lawless jurisdictions.”

“These anarchist zones are incompatible with the American commitment to its citizens that it is a nation based on laws.” (RELATED: ‘Seattle Has Been Liberated’: White House Celebrates The Fall Of CHAZ) 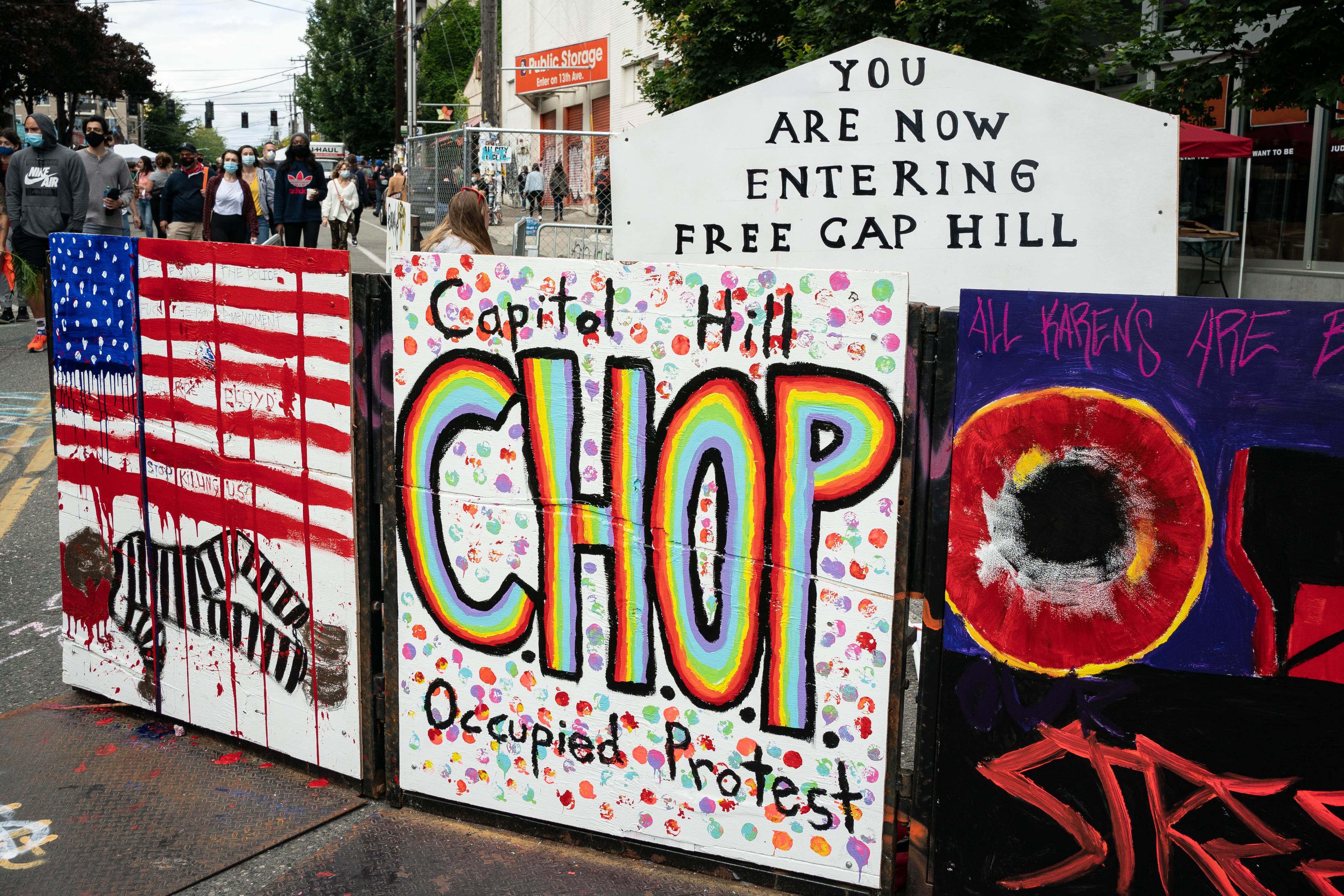 A signs reads “Capitol Hill Occupied Protest” in area that has been referred to by protesters by that name as well as “Capitol Hill Organized Protest, or CHOP, on June 14, 2020 in Seattle, Washington. (David Ryder/Getty Images)

Ernst told the Daily Caller that city and state leaders who allow these zones “are failing to do their jobs and failing to protect their citizens.” She explained that while she has garnered support from fellow Republicans, the bill still needs more help.

“Well, I do have a lot of support from my Republican counterparts,” Ernst said. “So, that’s the issue is that we really need our Democratic friends to step up and say, ‘This is not right. These mayors are putting those citizens in jeopardy.'”

“The mayors are allowing this to happen by appeasing these anarchists,” she continued, reiterating that despite Democrats potentially not backing the bill, she believes it is important.

“The most fundamental duty of these cities is to provide security for law-abiding citizens. Instead, we have seen businesses destroyed and lives senselessly taken,” according to the letter.

The Iowa senator added to the Daily Caller that “it’s an uphill battle,” but one “that needs to be fought.”

“We need peace across the United States, not, you know, miniaturized war zones where it’s a free-f0r-all,” she said. “That should not happen … if they understood that federal funds are in jeopardy, they would be less inclined to allow those anarchists zones.”