A House resolution introduced Thursday by Republican Texas Rep. Louie Gohmert would ban the Democratic Party because of their so-called “loathsome and bigoted past.”

The “Privileged Resolution” calls on Congress “to ban any political organization or party that has ever held a public position supportive of slavery or the Confederate States of America,” The Hill reported.

Further, it calls for House Speaker Nancy Pelosi to remove “any item that names, symbolizes or mentions any political organization or party that supported slavery or the Confederacy” from the U.S. Capitol’s House wing and all House office buildings.

“A great portion of the history of the Democratic Party is filled with racism and hatred,” Gohmert said in a statement announcing the resolution. “Since people are demanding we rid ourselves of the entities, symbols, and reminders of the repugnant aspects of our past, then the time has come for Democrats to acknowledge their party’s loathsome and bigoted past, and consider changing their party name to something that isn’t so blatantly and offensively tied to slavery, Jim Crow, discrimination, and the Ku Klux Klan.” 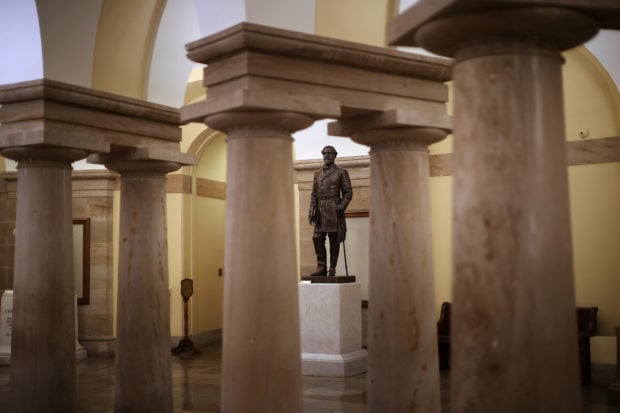 WASHINGTON, DC – JUNE 18: A statue of Robert E. Lee, commander of the Confederate States Army during the Civil War, is on display in the Crypt of the U.S. Capitol June 18, 2020 in Washington, DC. (Photo by Chip Somodevilla/Getty Images)

Gohmert criticized the legislation Thursday as failing “to address the most ever-present historical stigma of the United States Capitol, that is the source that so fervently supported, condoned and fought for slavery that was left untouched, but without whom, the evil of slavery could never have continued as it did to such extremes that it necessary to address here in order for the U.S. House of Representatives to avoid degradation of historical fact and blatant hypocrisy for generations to come,” The Hill reported.