The ad, which accused Democrats of “trying to buy Georgia,” called for donations to help “Perdue fight back.” It showed black-and-white, pixelated images of Ossoff and Senate Majority Leader Chuck Schumer, who is also Jewish.

The Ossoff image was altered from a 2017 Reuters photo, Forward reported. Ossoff’s nose in the manipulated image appeared to be longer and wider than the original photo. 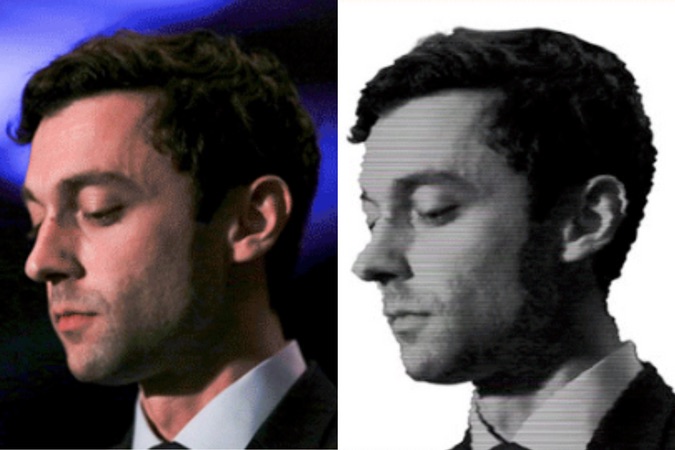 Left: the 2017 Reuters photo. Right: the ad showing the altered image of Ossoff, where his nose appears longer and wider than the original.

Depictions of Jews with large noses has been a longstanding anti-Semitic trope since the mid-1800s, Forward reported.

In response to accusations of anti-Semitism, Perdue’s campaign said the design was accidental and removed the ad from Facebook.

“The photo was resized and a filter was applied, which appears to have caused an unintentional error that distorted the image,” his campaign said in an email to the Daily Caller News Foundation.

Perdue’s campaign told the DCNF that Perdue did not see the ad before it was put out.

“Anybody who implies that this was anything other than an inadvertent error is intentionally misrepresenting Senator Perdue’s strong and consistent record of standing firmly against anti-Semitism and all forms of hate.”

Ossoff responded to the ad on Twitter, addressing Perdue and saying that “literally no one believes your excuses.”

This is the oldest, most obvious, least original anti-Semitic trope in history.

Senator, literally no one believes your excuses.https://t.co/PiA7P4O4M2

The ad ran on Facebook for five days before it was removed. It was seen by over one-million people, Forward reported.

In addition to Ossoff’s alteration, the accusation that he and Schumer were trying to “buy” Georgia was immediately condemned as anti-Semitic as well, according to Forward.

Both Republicans and Democrats have been accused of anti-Semitism in recent years, and attacks against Jews have been increasingly prominent in the United States. (RELATED: Minnesota Couple Who Wore Swastika Face Masks Banned From Walmart)

Ossoff is best known for his 2017 congressional race, which was the most expensive in history. He won the Democratic nomination to take on Perdue in June with just over 50% of the vote, and the non-partisan Cook Political Report rates the race as a toss-up in November.