The Metropolitan Police Department arrested four people for defacing property in the District of Columbia as occasional riots engulfed portions of the city over nearly two months, but arrested two pro-lifers for writing “black preborn lives matter” in chalk Saturday.

MPD spokeswoman Alaina Gertz confirmed to the Daily Caller News Foundation Monday that only four people were arrested for defacing private/public property during protests and riots in late May, June and most of July — numbers reflected in the MPD’s “Unrest-Related Arrest Data” between May 30 and July 17. (RELATED: DC Police Reveal Why They Arrested Teens Writing Pro-Life Messages In Chalk)

According to the dataset: “An arrest was considered ‘unrest-related’ if it was a curfew violation where a person refused to return home despite receiving a warning, and/or if the person committed another arrestable offense in a public space or due to unlawful entry of a private space, co-located with or near in time or place to demonstrations going on in the city at the time, and appearing clearly or likely linked to the civil unrest in the city.” 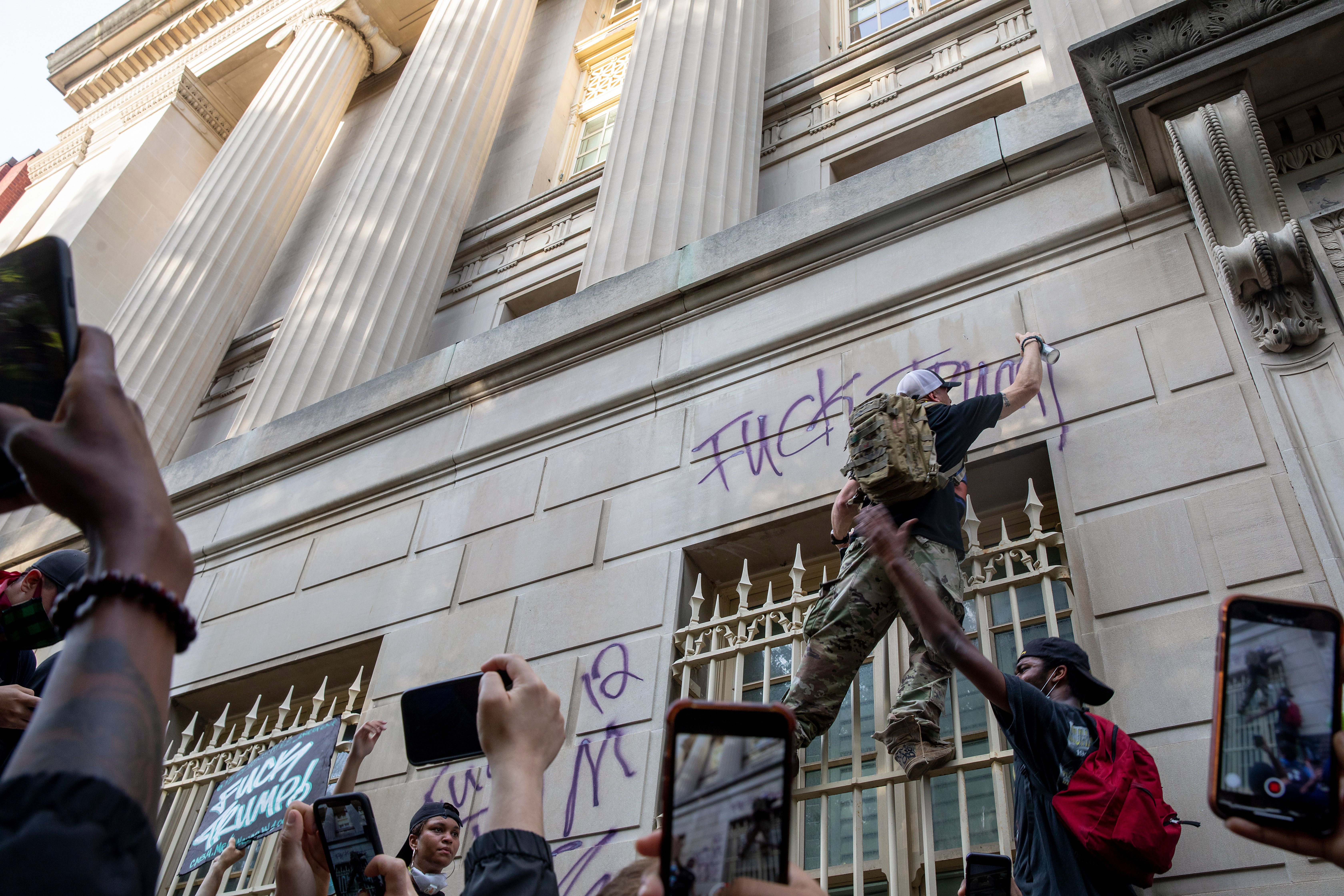 A demonstrator writes graffiti on the Freedman’s Bank Building during a protest in response to the police killing of George Floyd on May 29, 2020 in Washington, DC. (Tasos Katopodis/Getty Images)

MPD then arrested two members of the Students for Life of America group Saturday morning for chalking pro-life sentiments, including the slogan “Black Preborn Lives Matter,” on the road in front of a Planned Parenthood abortion clinic.

Gertz told the DCNF that the Students for Life members were arrested for “defacing of private/public property” and were later “both citation released.”

Some protests in DC since May have turned violent and chaotic, frequently after dark. The SFLA members were arrested early Saturday morning during the daylight at an event where less than 50 people were present, Students for Life spokeswoman Kristi Hamrick told the DCNF.

“The fact that two Students for Life of America students were arrested for chalking BLACK PREBORN LIVES MATTER shows that government officials are practicing viewpoint discrimination to unconstitutionally block pro-life American’s Free Speech rights,” Students for Life Executive Director Kristan Hawkins told the DCNF. “If you open the door to free speech on the city streets to one group, you can’t shut it to others.”

Hawkins noted that the group is seeking legal remedies and speaking with lawyers about their next steps.

MPD did not address why so few persons were arrested for defacing public property during the recorded “unrest” period, though photographs of the riots and protests show that many buildings and statues throughout the nation’s capital were defaced with BLM slogans, graffiti, anti-police sentiment, and curse words.

DC’s Mayor Muriel Bowser commissioned the “Black Lives Matter” slogan to be painted on the streets of DC across from the White House in print large enough to be seen from space, Fox 5 reported.

“Certain statues, public buildings, and areas of D.C. are under the jurisdiction of federal law enforcement agencies,” Gertz said, referring the DCNF to a list of persons whom the MPD is searching for regarding “multiple offenses that occurred during the recent First Amendment demonstrations, including the Defacing of Private/Public Property.”

Three individuals on the MPD’s list of persons of interest are being sought for defacing public or private property, according to the list of suspects.

“I can only comment on specific incidents in which MPD is the responding agency within that jurisdiction,” Gertz added. 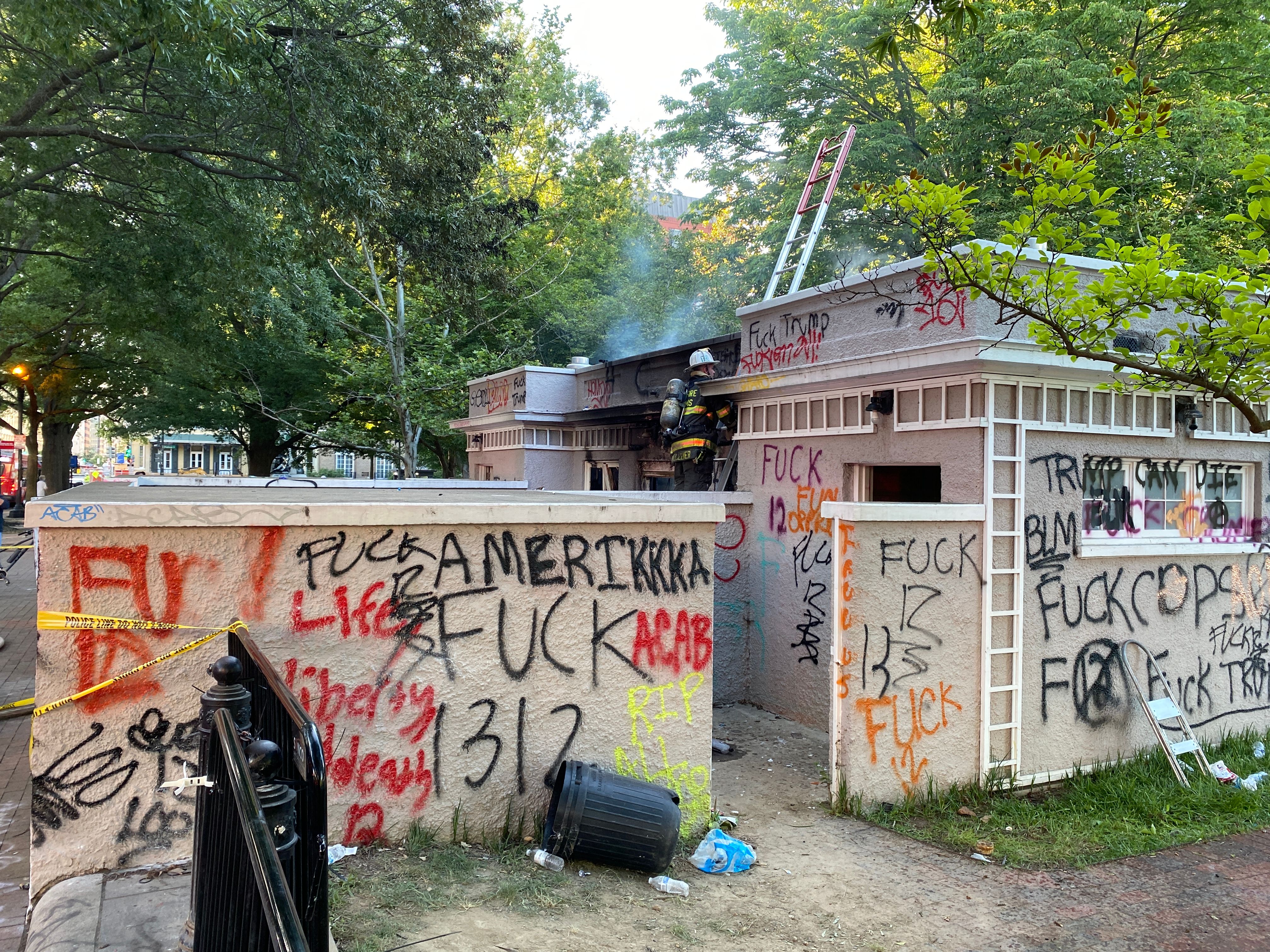 Graffiti left by demonstrators protesting the death of George Floyd, is seen at Lafayette Square, near the White House in Washington, DC on June 1, 2020. (DANIEL SLIM/AFP via Getty Images)

Students for Life of America and the Frederick Douglass Foundation had planned to write the words “BLACK PREBORN LIVES MATTER” on the sidewalk outside an abortion clinic in Washington, D.C. Saturday morning, according to a Students for Life press release.

The group advertised the event before it took place through press emails. Students for Life also said it obtained a permit for the event, but did not respond to requests for comment from the DCNF about this permit.

According to MPD, the groups had obtained a permit to assemble, but needed a permit from D.C. Department of Transportation to also be able to mark the roads. D.C. DOT did not immediately respond to a request for comment. (RELATED: Rioters Deface Memorial Honoring Those Killed By Communist Regimes) 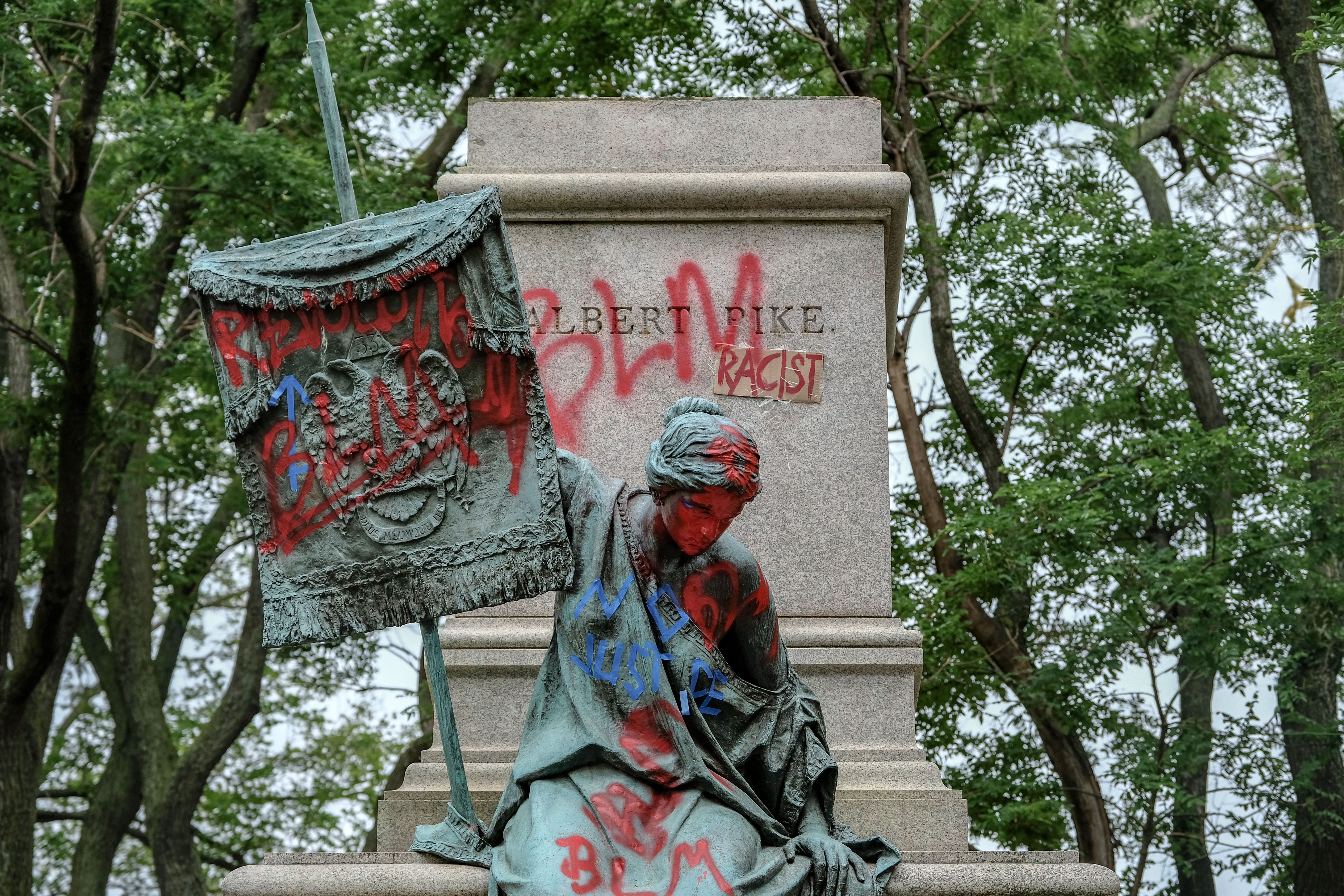 The pedestal where the statue of Confederate general Albert Pike remains empty after it was toppled by protesters at Judiciary square in Washington, DC on June 20, 2020. Protests have continued across the country in reaction to the death of George Floyd. (Alex Wroblewski/Getty Images)

Both advocacy groups sent letter on July 20 to Mayor Muriel Bowser requesting permission to paint the words “Black Preborn Lives Matter” in order “to celebrate the beautiful children with endless potential who are the future of their community and deserve the opportunity to make their mark in the world.”

Bowser has not responded to many requests for comment regarding the incident and the July 20 letter.