Election officials in three battleground states wouldn’t say when the U.S. can expect the results from November’s presidential race, and an official in a fourth state said the timing is uncertain.

Numerous news reports have indicated that election results could take a week to return due to the coronavirus pandemic and an increased reliance on mail-in ballots. Accuracy and timing will be especially crucial in the battleground states that will likely determine whether President Donald Trump will serve another term or be ousted by former Vice President Joe Biden.

But in three of those states, Arizona, Florida and Pennsylvania, election officials didn’t respond to repeated inquiries asking how quickly after polls close on Nov. 3 the states will be able to announce the presidential winner. A Florida elections official told the Daily Caller News Foundation he would provide information, but never followed through, even after numerous reminders.

In a fourth state, Wisconsin, an election official said he didn’t know when results would be announced.

“I think at this point we’re not certain,” Reid Magney told the DCNF. “A typical Wisconsin election is over 3 million ballots, which is over 70% of the voting age population. It depends on what percentage of those voters vote absentee.”

And in Michigan and North Carolina, election officials told the DCNF they are taking steps to prepare not only for record amounts of absentee ballots, but to ensure that results would be delivered accurately and timely.

North Carolina official Pat Gannon said the state will provide results the night of the election, thanks to expansions for early voting, campaigns to recruit and train poll workers and more, the DCNF previously reported. 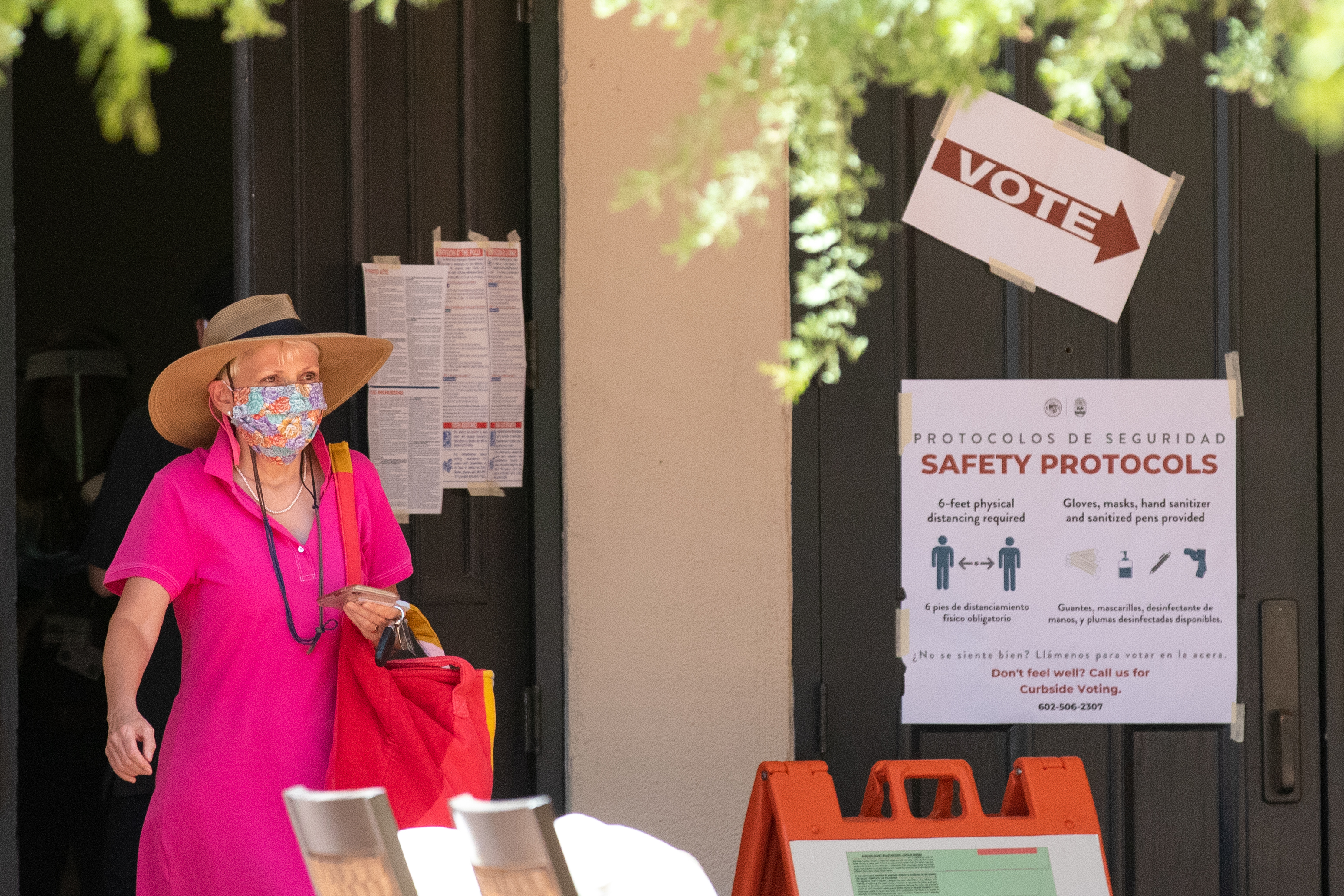 In Wisconsin, the state’s election commission has allocated “several million dollars” towards personal protective equipment (PPE), including masks, hand sanitizers, plexiglass barriers and more, for polling places, training poll workers, enhancing mail-in ballot security and more, Reid Magney, a spokesman for the commission, told the DCNF, though he did not provide an exact figure.

Magney said the state’s decentralized electoral process makes it “almost impossible” for electoral fraud to occur,” but added that he could not say for sure whether the precincts would be able to report their results in a timely manner.

He also pointed to the state’s upcoming down-ballot primary on Tuesday, which he said would be “a good dry run for election day.”

The election comes four months after the state’s presidential primary in April, which was widely criticized for putting voters and poll workers’ health at risk over coronavirus concerns after the Wisconsin’s Supreme Court refused to delay it.

So far, the state has already received 400,000 absentee ballots for the election, a sign that turnout in November is likely to shatter records regarding the amount of absentee ballots, as well as overall turnout records, Magney said. (RELATED: Biden Leads Trump In Battleground States, According To CNBC Poll)

“I can tell you this. The electorate is energized and wants to have a say,” he told the DCNF.

In Michigan, Tracy Wimmer, a Secretary of State spokeswoman, said that a record $11 million had been allocated across the state to provide PPE, staff polling places, purchase high-speed ballot tabulators and more, all with the goal of ensuring timely and accurate results.

“That infrastructure is in place,” Wimmer told the DCNF. 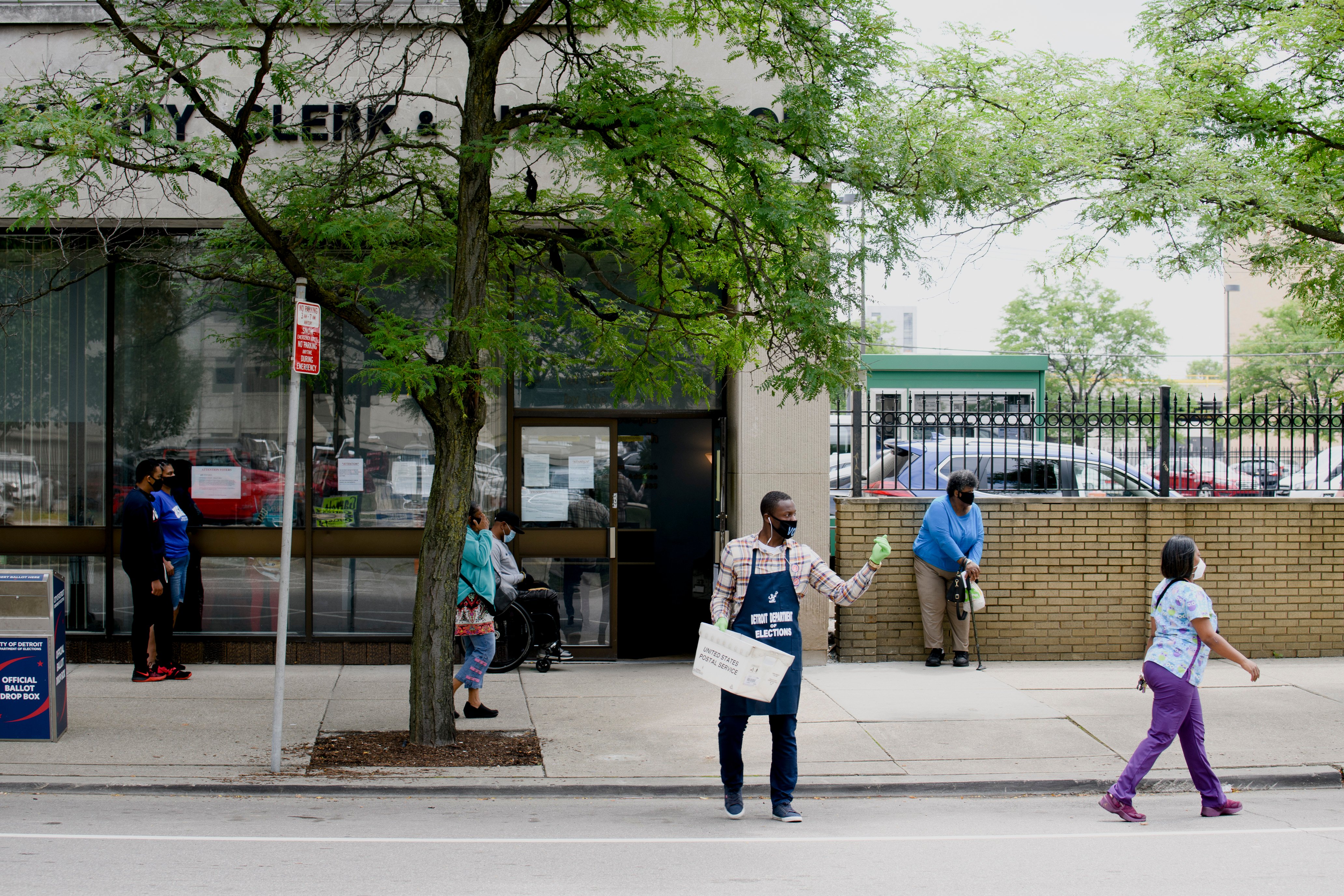 An election worker instructs cars where to drop off their ballots in Detroit, Michigan. (Brittany Greeson/Getty Images)

Michigan also launched its “Democracy MVP” campaign in April in order to better recruit and train poll workers, Wimmer said. Through Friday, the campaign had recruited over 6,500 hundred workers, many of whom helped run the polls during Tuesday’s primary, which she described as a “huge success.”

Not only did Michigan succeed in delivering its primary results timely and accurately, but they did it with record turnout, Wimmer said. Over 2.5 million Michiganders voted in the primary, of which 1.6 million voted by mail.

Despite the August primary proceeding smoothly, Wimmer cautioned that Michigan still has work to do in preparing for November, including a pending bill that would allow poll workers to begin tallying absentee ballots a few days in advance in order to better ensure that delays are avoided.

Despite the bill having the support of Democratic Gov. Gretchen Whitmer and Secretary of State Jocelyn Benson, Republicans in the state legislature have not indicated that they will support it, Wimmer told the DCNF.

Though Michigan is likely to be remarkably close in November, the Secretary of State’s office is prepared for the likely record-high turnout, even if most ballots arrive by mail, Wimmer said.

“Turnout has been predicted to double or even triple, and we are preparing for that possibility,” she told the DCNF.