The final votes of the 2020 primaries were cast Tuesday concluding a primary season marred by confusion, lawsuits and a United States Postal Service Inspector General investigation.

Threats of fraud, foreign interference and large-scale voter disenfranchisement have brought the United States Postal Service’s (USPS) ability to transport the expected surge of mail-in ballots this November into focus. The postal service, though, recently stood by its ability to handle the increased load.

“The Postal Service is committed to delivering Election Mail in a timely manner. We employ a robust and proven process to ensure proper handling of all Election Mail, including ballots,” the USPS told The Daily Caller News Foundation in an email statement.

“This includes close coordination and partnerships with election officials at the local and state levels.” 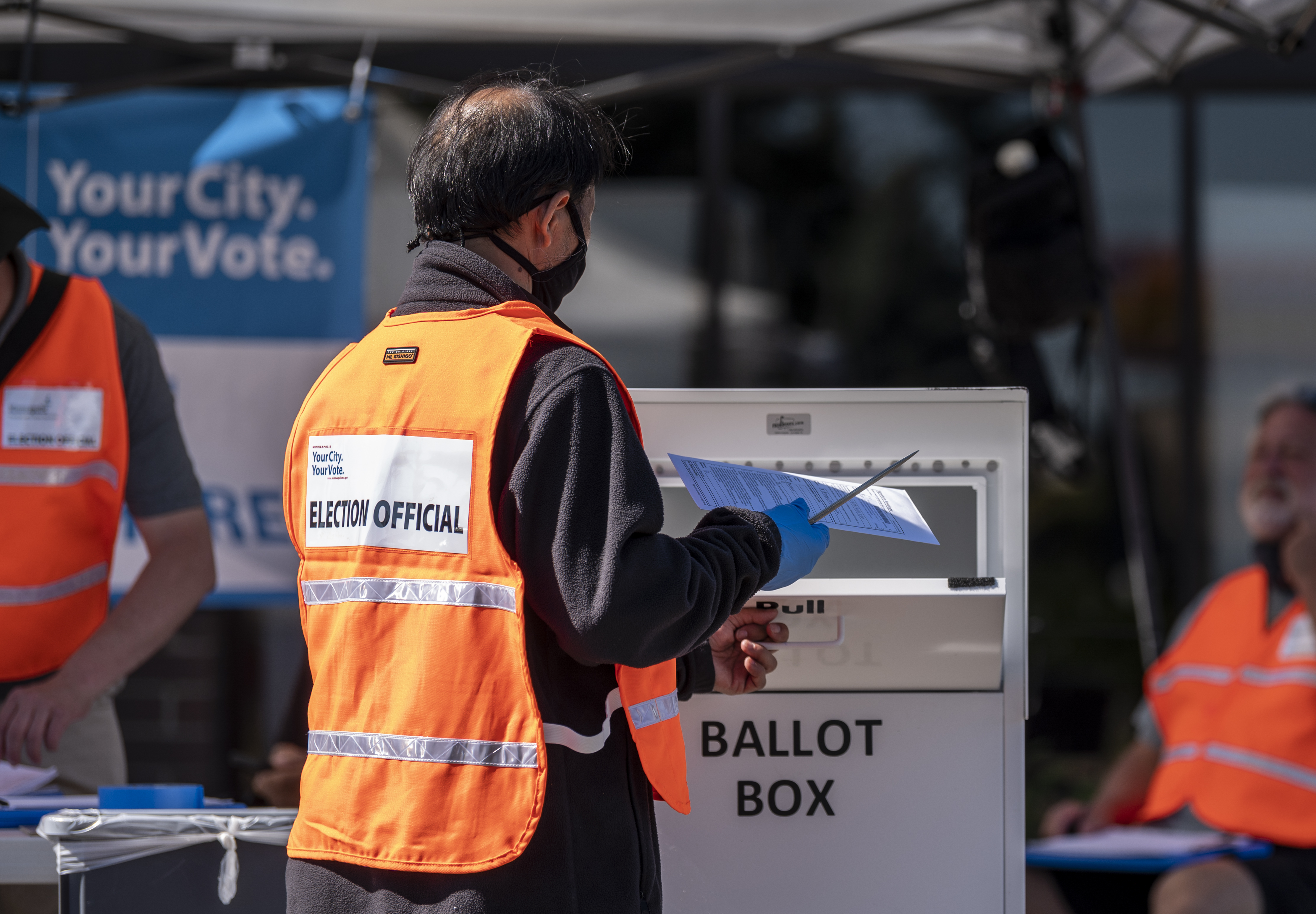 An election judge drops a ballot in a ballot box at a drive through drop-off for absentee ballots on August 11, 2020 in Minneapolis, Minnesota. (Stephen Maturen/Getty Images)

However, recent primary elections across the country, which were upended by the coronavirus pandemic and in turn had to rely on mail-in voting systems, have been a cause for concern. The World Health Organization designated the coronavirus a pandemic March 11, the heart of the primary season, and days later President Donald Trump declared a national emergency as the virus spread rapidly around the world.

Wisconsin Sens. Ron Johnson and Tammy Baldwin wrote to the USPS Inspector General in April requesting an investigation into their state’s April 7 primary after tubs of absentee ballots weren’t delivered to voters and hundreds of ballots arrived to election officials missing postmarks.

The inspector general discovered “issues related to the timeliness of ballots being mailed to voters, correcting misdelivery of ballots, an inability to track ballots, and inconsistent postmarking of ballots.” (RELATED: Nearly 50% Of Americans Believe Mail-In Voting Is Vulnerable To Significant Levels Of Fraud: Poll)

Pennsylvania’s mail-in system prevented tens of thousands of people from voting in the state’s June primaries, The Philadelphia Inquirer, reported. Like California, the problem was late ballot delivery.

“The big story out of Pennsylvania is really voter confusion,” said Suzanne Almeida, interim director of Common Cause Pennsylvania, according to Reuters. 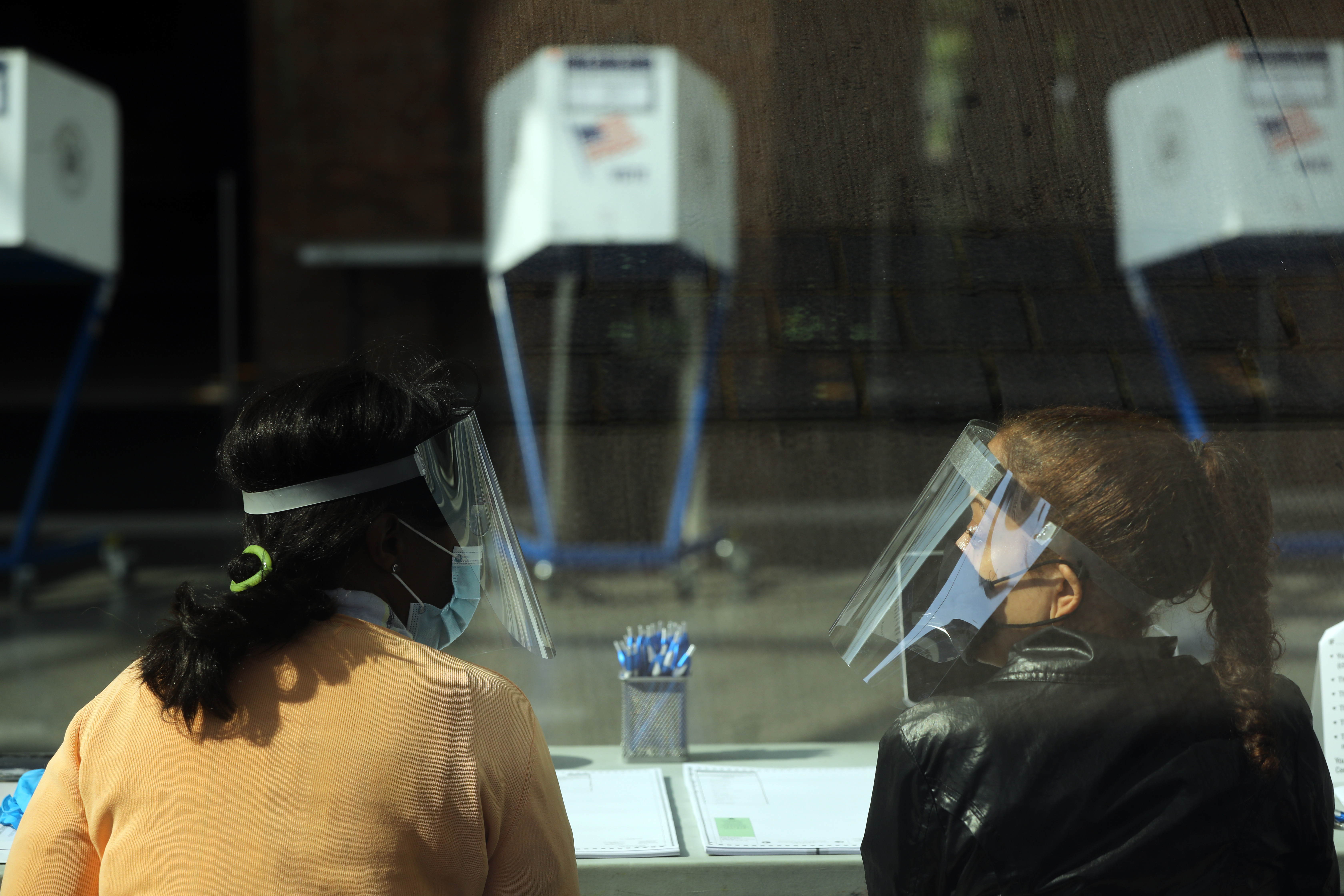 Poll workers wait for voters during a primary election for city, state and federal offices at the Brooklyn Museum on June 23, 2020 in New York City. (Spencer Platt/Getty Images)

A federal judge in New York ruled on Aug. 3 that more than 1,000 ballots cast in the state’s June primary, which were either not postmarked or late, must be counted. But, the U.S. Supreme Court ruled in April that absentee ballots in Wisconsin must be received or postmarked by election day to be counted, SCOTUS Blog reported.

“I believe every ballot should be received in the mail by Election Day in order to count and any ballot received after Election Day should be disregarded to eliminate ‘ballot harvesting’ and any other methods of potential fraud,” Republican Rep. James Comer of Kentucky, the ranking member of the Committee on Oversight and Reform which oversees the USPS, told the DCNF.

Many states have changed their voting policies for November’s general election to allow more people to vote by mail, according to Vote.org. A record 76% of Americans will be able to vote by mail in the general election, The New York Times reported. (RELATED: NJ City Officials Charged After 1 In 5 Mail-In Ballots Found To Be Fraudulent In Election) 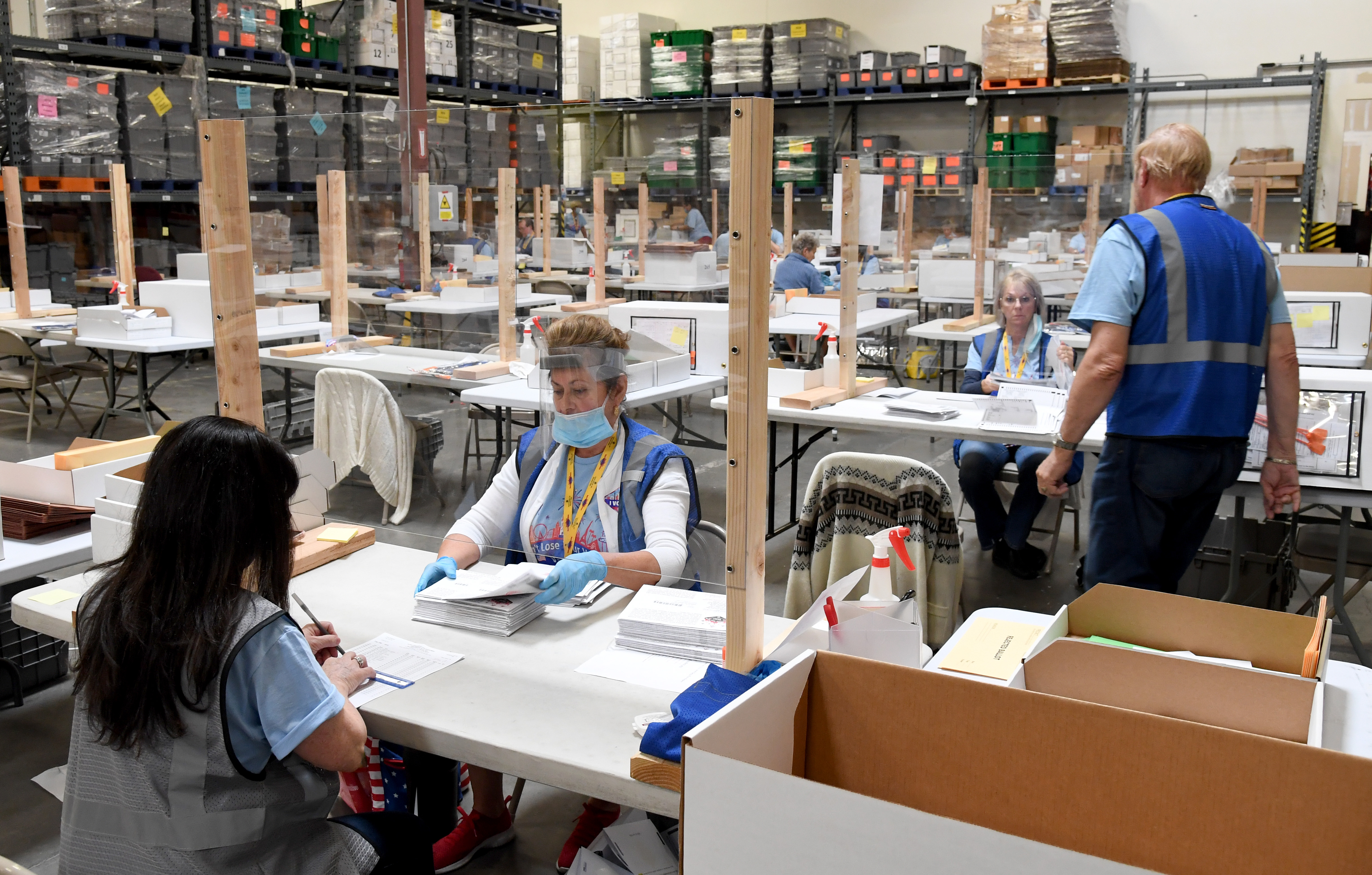 Ann-Marie Gomes and Juanita Thompson count and verify mail ballots at the Clark County Election Department, which is serving as both a primary election ballot drop-off point and an in-person voting center amid the coronavirus pandemic on June 9, 2020 in North Las Vegas, Nevada. (Ethan Miller/Getty Images)

“There’s no such thing as a perfect election,” Amber McReynolds, CEO of The National Vote at Home Institute, told the DCNF. “There are issues that come up every election cycle.” (RELATED: Federal Judge Rules Ballots Received After New York Primary Without Postmark Must Be Counted)

She said: “We have seen issues and frankly those issues that we’ve seen have arisen from what I believe are policy flaws. So, for instance, the delays in New York, delays in Michigan, Pennsylvania and a few other places are really because they don’t allow election officials to process ballots in advance.”

Processing ballots is the system in which local election officials receive ballots, verify the voter’s information and organize the ballots for counting, according to the National Conference of State Legislatures. Several states including swing states Wisconsin, Michigan and Pennsylvania don’t allow processing until election day.

“The risk for mistakes is less with vote by mail because everything is processed internally as opposed to at a bunch of different polling locations where poll workers don’t follow procedures like they are supposed to,” McReynolds said.

McReynolds said the USPS, which handles 500 million pieces of mail daily, has proven more than capable of handling and delivering ballots. She said the potential for miscommunication between election officials and the postal service is more worrisome. 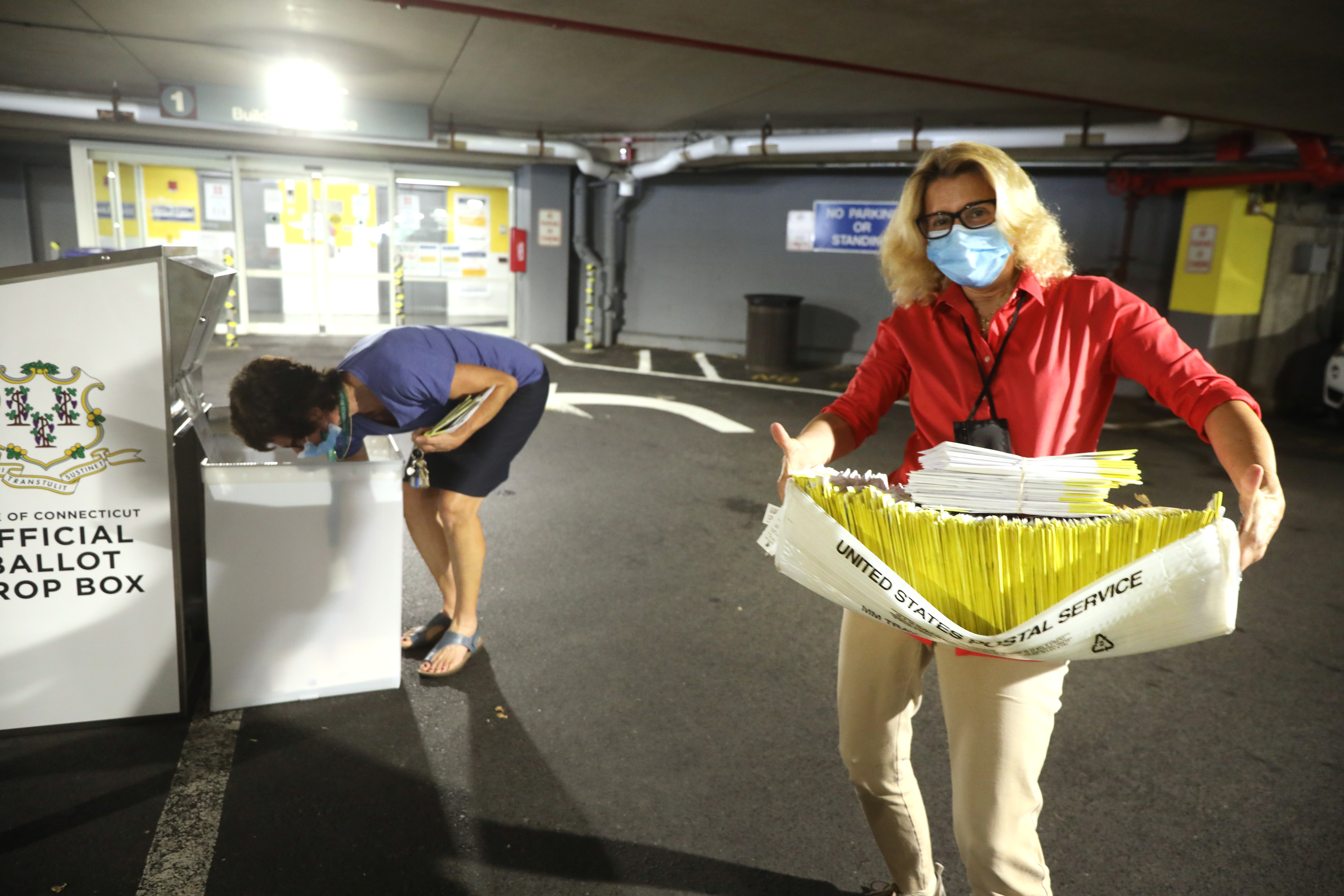 A polling worker carries 2020 presidential primary ballots that were dropped off at a post office and brought to a government center to be processed and counted at the Stamford Government Center on August 11, 2020 in Hartford, Connecticut. (Spencer Platt/Getty Images)

“The problem with all-mail voting is that votes cast through the mail are subject to being stolen, altered, and forged, and are dependent on the postal service delivering them in time and to the correct address,” said Hans von Spakovsky, manager of The Heritage Foundation’s Election Law Reform Initiative in an email to the DCNF. “Experience shows that often does not happen.”

“There is no reason we can’t vote in-person safely – the same way all of us are currently going to our grocery stores, pharmacies, and retail establishments like Walmart and Target,” von Spakovsky added.

The Centers for Disease Control and Prevention released guidance in June outlining how election officials can safely conduct in-person voting. (RELATED: Three Battleground States Wouldn’t Say When We Can Expect Election Results. A Fourth Isn’t Sure.)

Five states – Colorado, Hawaii, Oregon, Utah and Washington – successfully implemented universal mail-in voting before the pandemic, according to The Times.

“We’ve seen no evidence of anything untoward with mail-in ballots,” Republican Gov. Gary Herbert of Utah said in July, The Salt Lake Tribune reported. “We think, in fact, it’s been a blessing to a lot of people to be able to get the ballot, review the ballot, study the issues and candidates and make an informed decision.”

Trump has strongly opposed mail-in voting and has said that the election will be more susceptible to fraud. He even floated the idea of delaying the election, but later said he didn’t want to delay the election. 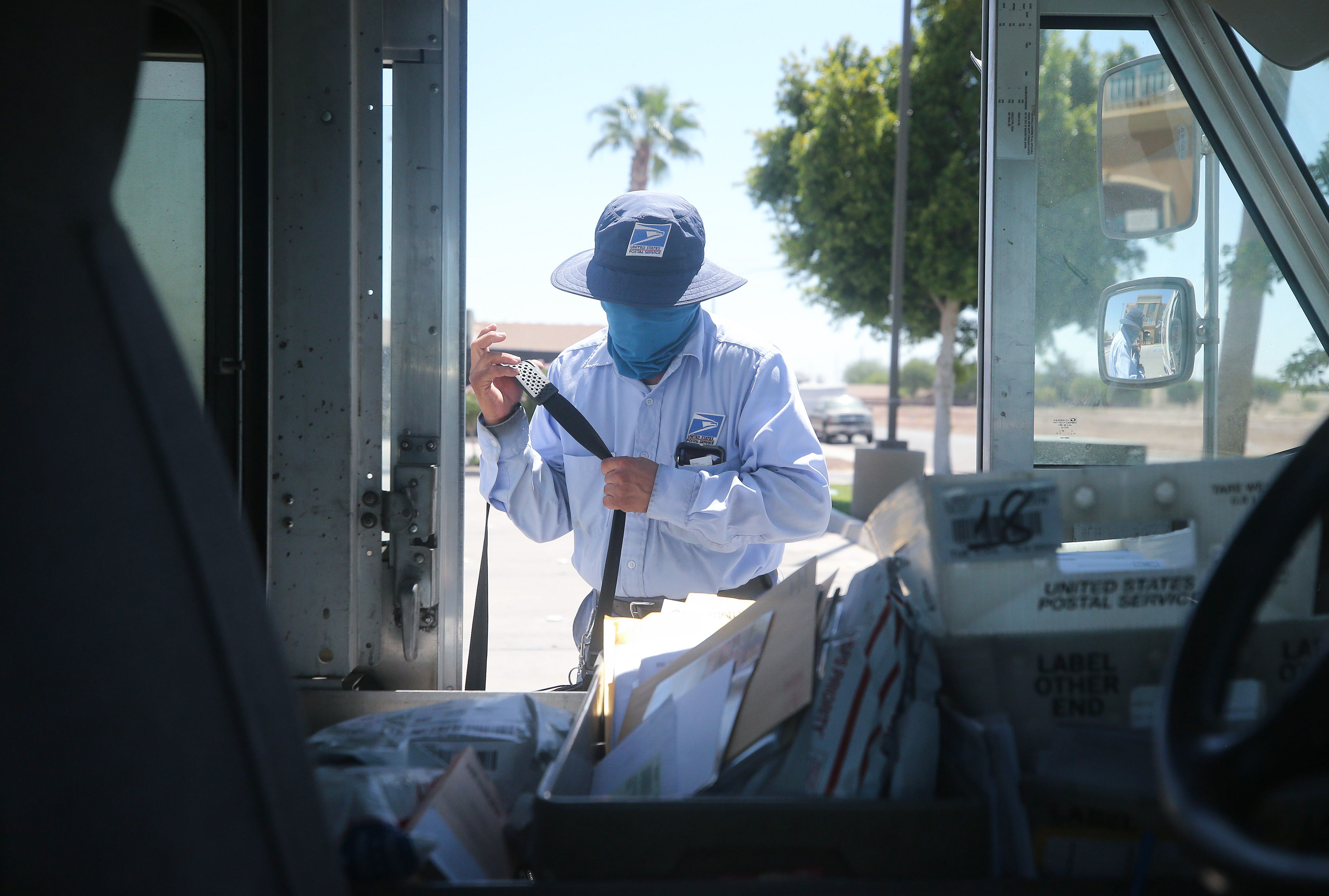 The USPS sent a memo, which the DCNF obtained, to managers across the country in July laying out the new policies, which included cutting back on overtime and ending the practice of postal workers returning to the post office during their shift to grab more mail to deliver.

“One aspect of these changes that may be difficult for employees is that – temporarily – we may see mail left behind or mail on the workroom floor or docks,” the memo said.

Louis DeJoy, a former logistics company executive, was selected to be the postmaster general in May. DeJoy said the changes outlined in the memo were intended to “improve operational efficiency” in a statement to The Times.

The USPS lost $69 billion between 2007 and 2018, according to a Government Accountability Office report that called the postal service’s financial position “unsustainable.”

“Under normal circumstances, delayed mail is a major problem – during a pandemic in the middle of a presidential election, it is catastrophic,” Schumer, Klobuchar, Peters and Carper said.

Democratic Rep. Bill Pascrell Jr. of New Jersey said the new policies implemented by DeJoy were an “attack on American democracy,” according to The Washington Post. 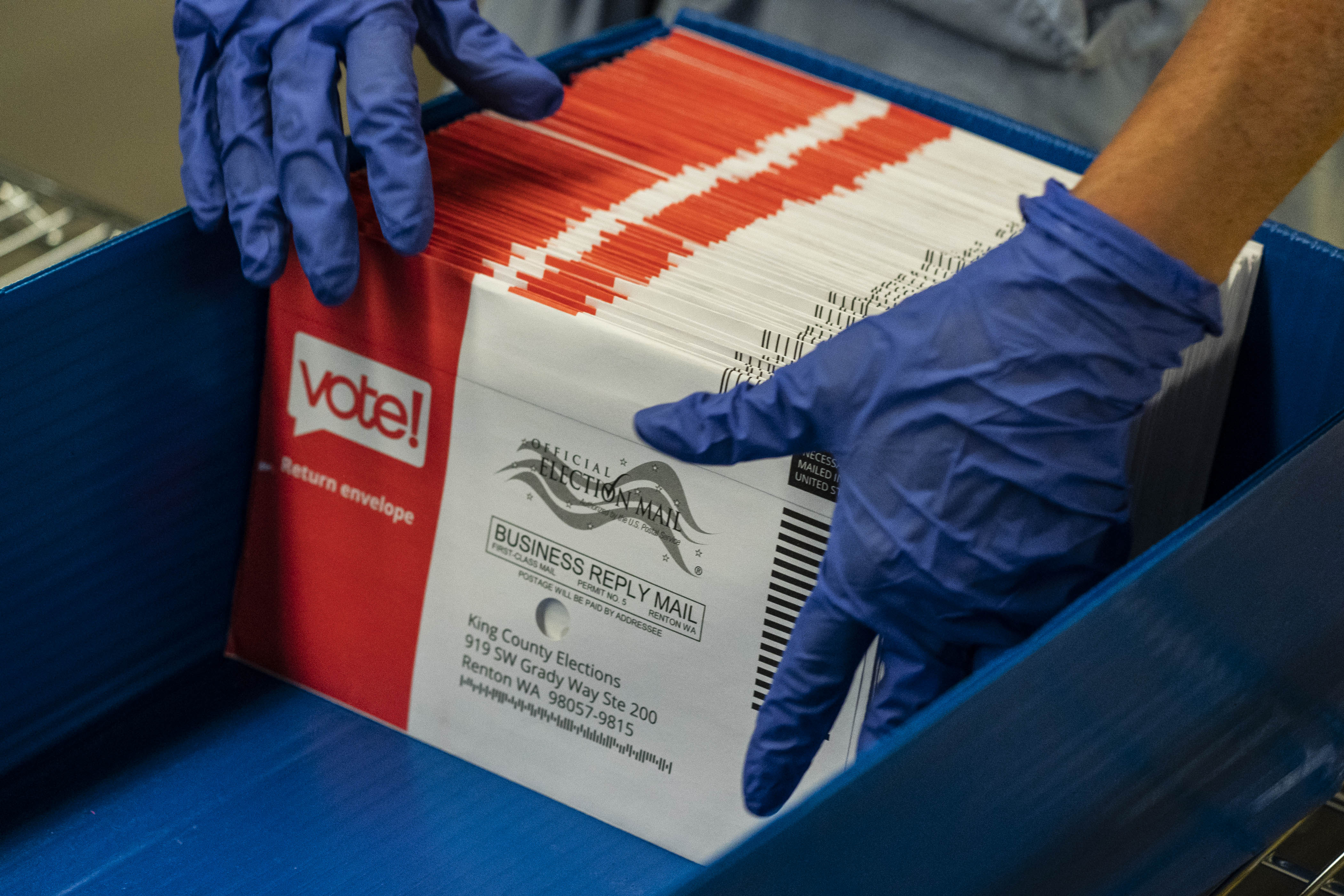 “It’s important that we cut through what is potentially a partisan fight versus more operational,” said McReynolds.

She continued: “The idea that the postmaster general could somehow make changes that only impact one segment of the population is just not possible based on how their operation works. If there is a negative impact to the post office, it impacts voters of all political persuasions and political stripes regardless.”

Mark Dimondstein, president of the American Postal Workers Union, told the DCNF that the new policies were “arbitrarily done.”

“Mail is backing up. You never delay mail,” he added referencing the USPS mission statement. 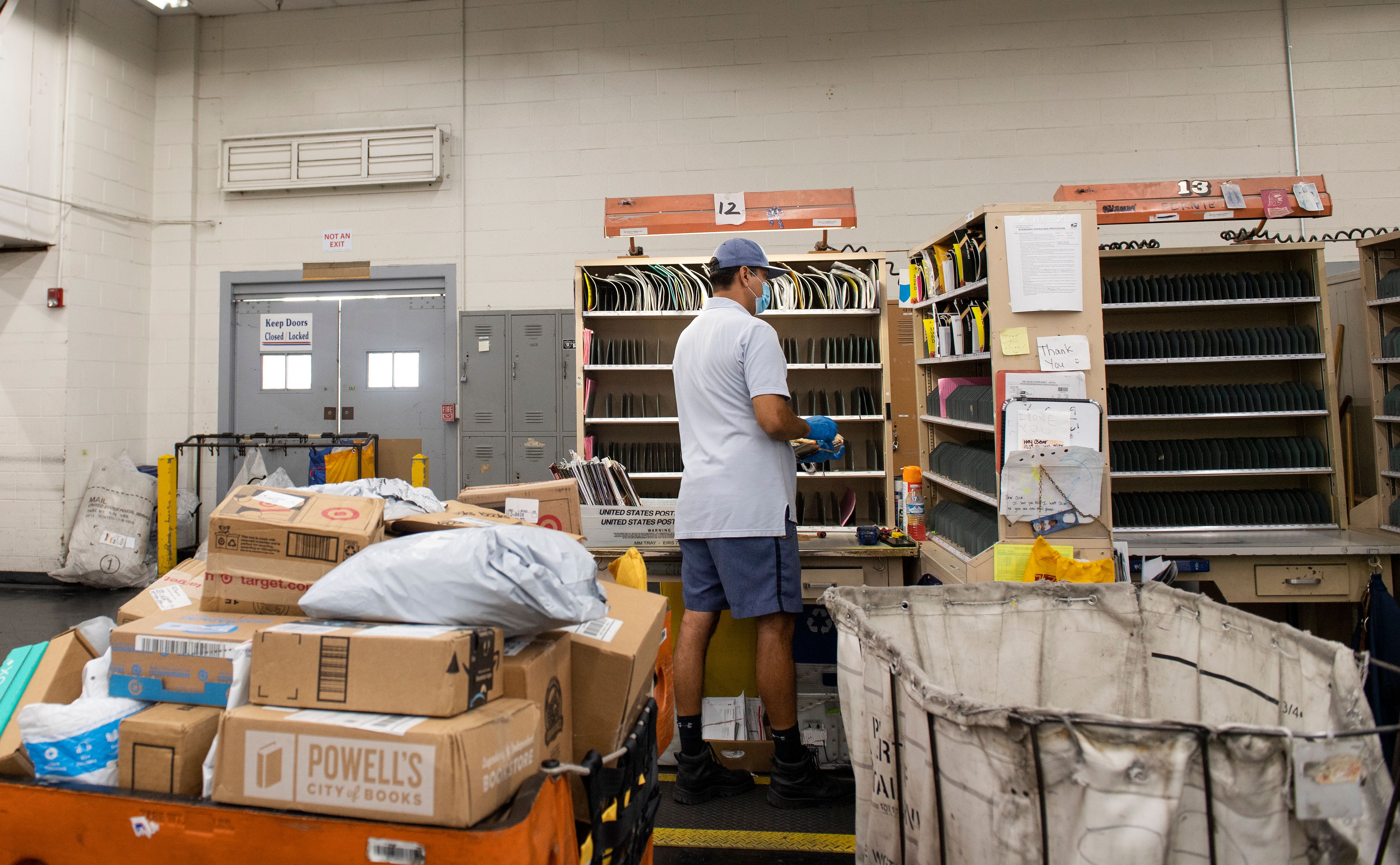 Overtime is required to deliver mail in a timely, efficient manner because of how the service is already understaffed, according to Dimondstein.

However, a USPS spokesman said there was never an “edict” to eliminate overtime, according to Government Executive.

“We are making these changes methodically and in ways designed to ensure the timely and cost-effective delivery of America’s mail, including election mail,” spokesman Roy Betts said.

Trump opposed inserting funding for the USPS in a relief package because it would enable universal mail-in voting, he said in a Fox Business interview Thursday.

The USPS told the DCNF it is developing a plan alongside local election officials and secretaries of state nationwide that “ensures efficient and cost-effective processing and delivery.”

“If they expect Congress to help them financially then they should exhibit confidence that they can perform this basic task,” Comer said.