A Democrat running for state House in Minnesota asked a crowd if “we give a f*ck about burning” down a town during a Black Lives Matter rally on Friday.

On Friday, Thompson attended a rally outside the home of Minneapolis Police Chief Union President, Bob Kroll in Hugo, Minnesota, where he delivered a roughly 10-minute speech laden with profanities and violent rhetoric.

His remarks were captured by reporters with Alpha News and Unicorn Riot.

“We coming. We coming for everything that you motherfuckers took from us. We coming for them [congressional] seats, we coming for the money you owe us. This whole goddamn state burned down for 20 goddamn dollars, you think we give a fuck about burning Hugo down?” he asked.

Thompson’s mention of $20 is likely a reference to the counterfeit $20 that George Floyd allegedly attempted to pass in Minneapolis, prompting the encounter with police which ultimately ended his life.

He also spoke directly to residents of Kroll’s neighborhood, who looked on at the rally from their driveways.

“Y’all got the Grand Wizard living in your goddamn neighborhood,” he told one family. “Fuck your mutherfucking peace, white racist motherfuckers,” he said.

“Take that sign, and stick it up your ass,” he yelled at another neighborhood resident who held an American flag with a blue stripe designed to show support for the police. (RELATED: BLM Protestors In Seattle Call On White People To Give Up Their Homes)

Thompson can also be seen yelling at a group of teenage girls in a video recorded and posted to Twitter by Alpha News.

John Thompson, who recently won his Primary for 67A in St. Paul, goes off and screams at neighborhood children, residents, and neighbors of Police Union Leader Bob Kroll.

“You ain’t never seen a legislator like this before,” he added at one point during his remarks, shortly before a woman wearing a red cross made from tape wafted him with smoke from what appears to be a bundle of sage. 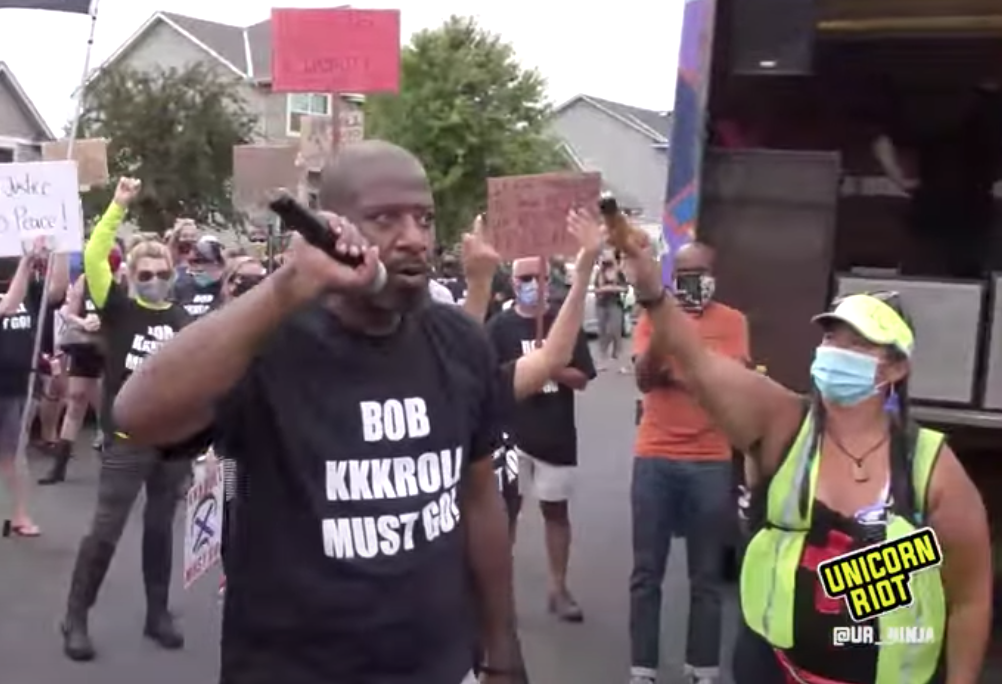 Thompson was joined by roughly 100 other protesters at Friday’s rally outside Kroll’s home.

More than 100 Black Lives Matter protesters rallied outside the home of Minneapolis Police Federation president Bob Kroll and his wife WCCO reporter Liz Collins in a continued effort to get them both fired from their jobs Saturday in Hugo, Minn. (Anthony Souffle/@StarTribune) pic.twitter.com/TrETuvkoQk

The protesters arrived in Kroll’s Hugo neighborhood via an organized caravan of vehicles as organizers blocked traffic, according to an Alpha News reporter.

Organizers are currently now blocking the light rail train as the large vehicle procession merges together onto 94E.

All vehicles have their hazard lights on and are marked with a blue “X” pic.twitter.com/2JHmxbVmEK