Though she is not expected to offer an explicit endorsement of Biden, the AP reported, she is the latest Republican to take part in the convention, following former Ohio Gov. John Kasich and former New York Rep. Susan Molinari who spoke Monday.

Her appearance emphasizes Democrats’ attempt to appeal to voters ranging from progressives to disenfranchised Republicans in order to beat President Donald Trump in November.

In a clip of the video released Tuesday by the 2020 Democratic National Convention, Cindy McCain describes the decades-long friendship between Biden and John McCain, who served as Biden’s aide when he was a junior senator from Delaware, the AP reported. (RELATED: Meghan McCain Strongly Hints That She’s Going To Vote For Biden)

Cindy McCain’s appearance is also notable since her husband was the Republican nominee for president in 2008, when he lost to former President Barack Obama who had chosen Biden as his vice president.

Both McCain and her daughter, Meghan McCain, have been vocal critics of Trump since 2015, when as a candidate he berated the former senator for being captured during the Vietnam War, saying that he preferred “people who weren’t captured.” 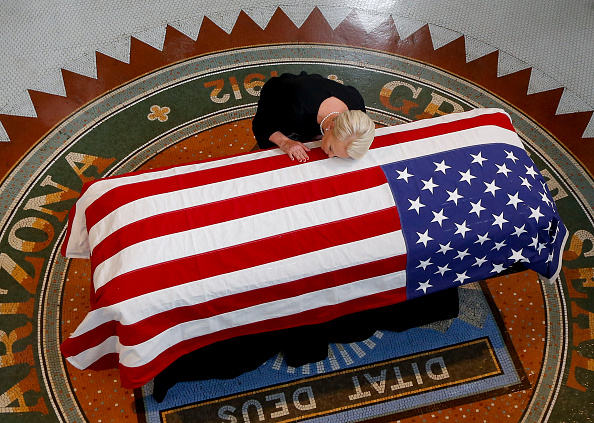 Cindy McCain, wife of US Senator John McCain, kisses his casket during a memorial service at the Arizona Capitol on August 29, 2018, in Phoenix. (ROSS D. FRANKLIN/AFP/Getty Images)

Trump also criticized the former GOP nominee after he returned to Congress to give the decisive thumbs-down vote in 2017 saving Obama’s Affordable Care Act from being repealed.

Trump was not invited to John McCain’s funeral when he died in 2018, according to the AP. John McCain succumbed to the same cancer that took Biden’s son, Beau, three years earlier.