New guidance from a U.S. Department of Homeland Security agency says teachers are “critical infrastructure workers” and can be exempt from quarantine requirements even after having been exposed to the novel coronavirus, as long as their state or local government permits.

Cybersecurity & Infrastructure Security Agency (CISA) Director Christopher C. Krebs issued the advisory on Aug. 18, but made it clear the decision to enforce the guidelines will be left entirely up to the state and local governments.

“This list is advisory in nature. It is not, nor should it be considered, a federal directive or standard…State, local, tribal, and territorial governments are responsible for implementing and executive response activities in their communities, while the Federal Government is in a supporting role,” the statement reads.

“Officials should use their own judgment in issuing implementation re-opening directives and guidance.”

Those who work in the education sector are now considered part of the “critical infrastructure workforce” and are allowed to return to the classroom even if they’ve potentially been exposed to the virus.

The Centers for Disease Control and Prevention (CDC) considers potential exposure as “having close contact within 6 feet of an individual with confirmed or suspected COVID-19.” As long as the workers aren’t showing symptoms, then they can carry on as usual while taking precautions, according to the CDC.

“Critical infrastructure workers may be permitted to continue to work following potential exposure to COVID-19, provided they remain asymptomatic and additional precautions are implemented to protect them and the community.”

The CDC recommends employers screen temperatures and check employee symptoms each day prior to the beginning of the shift, encourage employees to regularly monitor their symptoms, wear a mask and social distance.

Republican Tennessee Gov. Bill Lee said during a news briefing Tuesday he supports school districts adopting the policy and would leave it up to each district to make the decision, according to The Tennessean. (RELATED: CDC Director Says He’s ‘100’ Percent On His Grandchildren Going Back To School, Calls It ‘Critical’ To Get Schools Open)

If a district chooses to approve the policy to designate teachers as “critical infrastructure” they must notify the Tennessee Department of Education, per the same report.

“Districts that opt to implement the (critical infrastructure) approach for staff must implement additional measures to mitigate COVID-19 risk and notify TDH and the Tennessee Department of Education of such CI designation,” Education Commissioner Penny Schwinn and Public Health Commissioner Lisa Piercey wrote in a letter to school districts, according to The Tennessean.

In Forsyth County, Georgia, teachers had already been designated as critical infrastructure workers prior to the federal guidelines.

A spokesperson for Republican Georgia Gov. Brian Kemp said his administration is evaluating whether they want to incorporate the federal guidance, according to the Associated Press.

However, new health guidance in Georgia contradicts the “critical infrastructure” policy, saying exposed teachers must remain quarantined for 14 days even if they test negative.

National Education Association (NEA) President Lily Eskelsen Garcia said the designation “has no legal merit and is more of a rhetorical gambit to give President Trump and those governors who are disregarding the advice and guidance from public health experts an excuse to force educators into unsafe schools,” according to the AP. 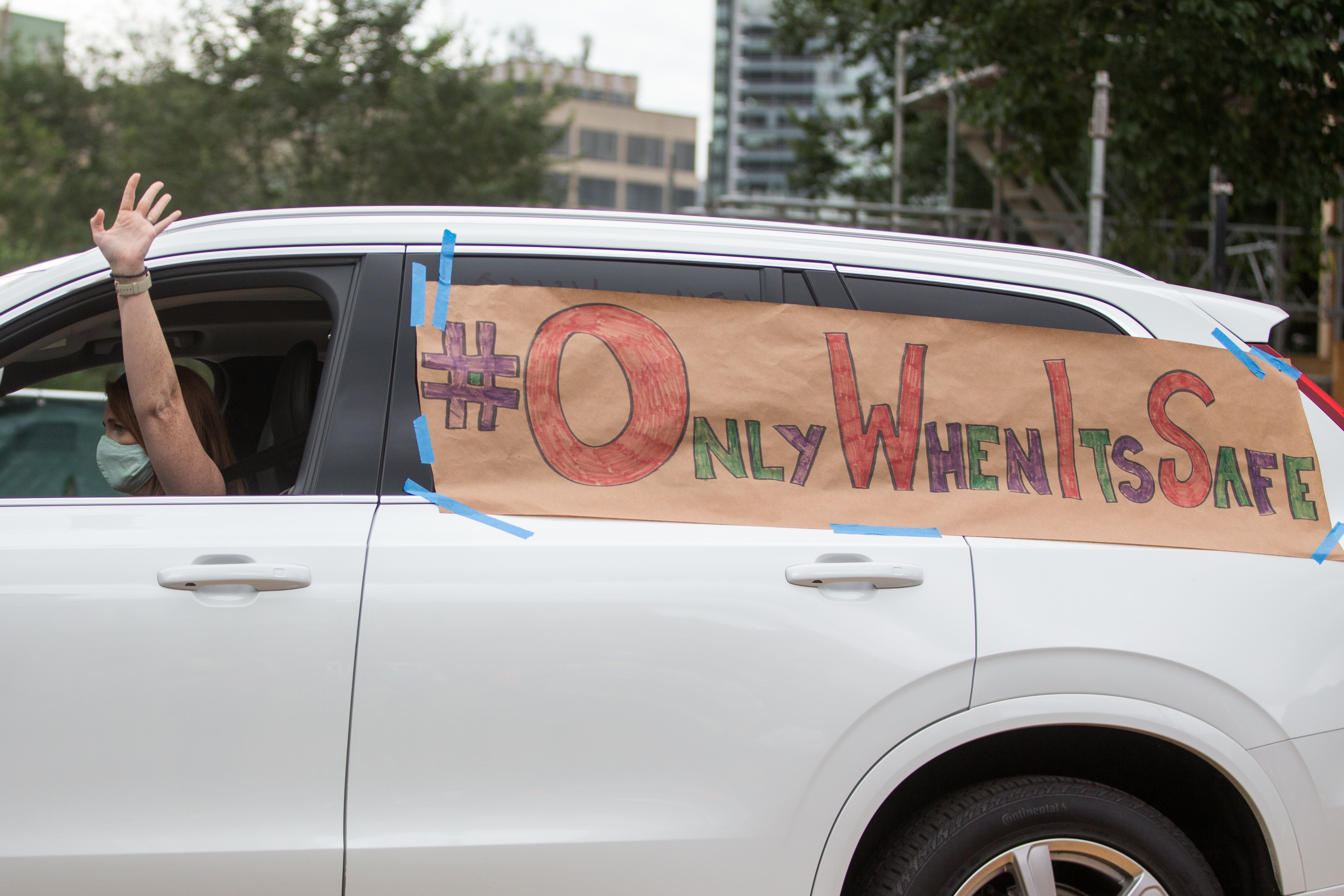 BOSTON, MA – AUG. 19: A vehicle waves as it passes a group of protesters in front of the Massachusetts State House on Aug. 19, 2020 in Boston, Massachusetts. The group is calling for a uniform requirement for all districts to start the school year with a comprehensive distance learning plan as well as clear health and safety standards that must be met for the gradual return of in-person learning. (Photo by Scott Eisen/Getty Images)

American Federation of Teachers President Randi Weingarten echoed her statement, saying “the Trump administration will always try to change the rules to threaten, bully and coerce.”

“If the president really saw us as essential, he’d act like it,” Weingarten said in a statement, per the AP. “Teachers are and always have been essential workers-but not essential enough, it seems, for the Trump administration to commit the resources necessary to keep them safe in the classroom.”