A political opponent of Vladimir Putin and anti-corruption activist Alexei Navalny is in a coma and on a ventilator in a Siberian hospital after allegedly being poisoned from tea he drank at an airport in Tomsk Thursday morning, according to the Daily Beast.

The allegations of poisoning first surfaced on twitter from Navalny’s press secretary and closest aide, Kira Yarmish. Her tweets, posted in the early-morning hours Thursday, were quickly picked up by Arkady Ostrovsky, The Economist magazine’s Russia Editor, who quote tweeted her thread.

Navalny’s flight made an emergency landing in Omsk when he started to feel very ill, as reported by the Daily Beast. Navalny was then rushed to a hospital via ambulance, where doctors, according to Yarmish, say the toxin’s quick effect was aided by the hot tea.

Alexei Navalny has been poisoned. He was on the plane from Siberia to Moscow when he fell sick. The plane made an emergency landing at an airport half way and he is being taken to hospital, according to his press secretary https://t.co/m7NaV00Z0d

Video footage has since surfaced from Pavel Lebedev, who posted several videos in which Navalny is writhing in pain as he receives medical attention on his instagram story.

Prior to posting the video from inside the plane, Lebedev posted a picture of Navalny snapped at the airport that morning, captioned “good morning Aleksey.” In the photo, Navalny appears to be drinking out of a red cup. After departing from the plane, Lebedev posted a message, again by instagram story, saying, “At the start of the flight he [Navalny] went to the toilet and he didn’t come back,” according to reporting from Business Insider. 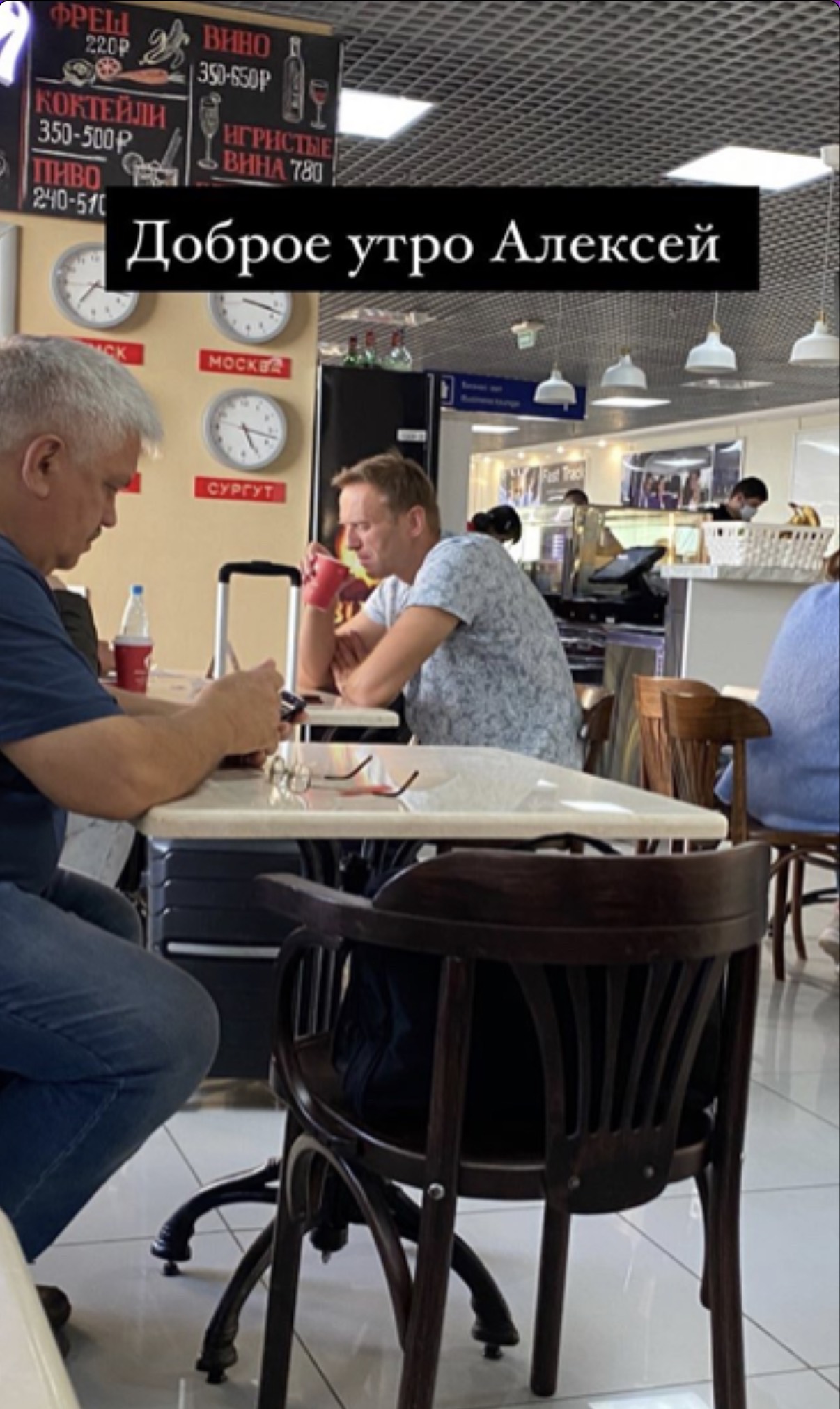 Alexei Navalny photographed in Tomsk appearing to drink from a red cup before falling ill due to an alleged poisoning on his flight back to Moscow. (@djpavlin on instagram)

Navalny, already unconscious, was put on a ventilator on arriving to Omsk emergency hospital No. 1; Kira Yarmish later tweeted Navalny was a coma. Minutes before, at 12:15 pm Omsk local time, she alleged that doctors at Omsk hospital were avoiding Navalny’s team, and said, “the evasive reaction of doctors only confirms that this is poisoning.” 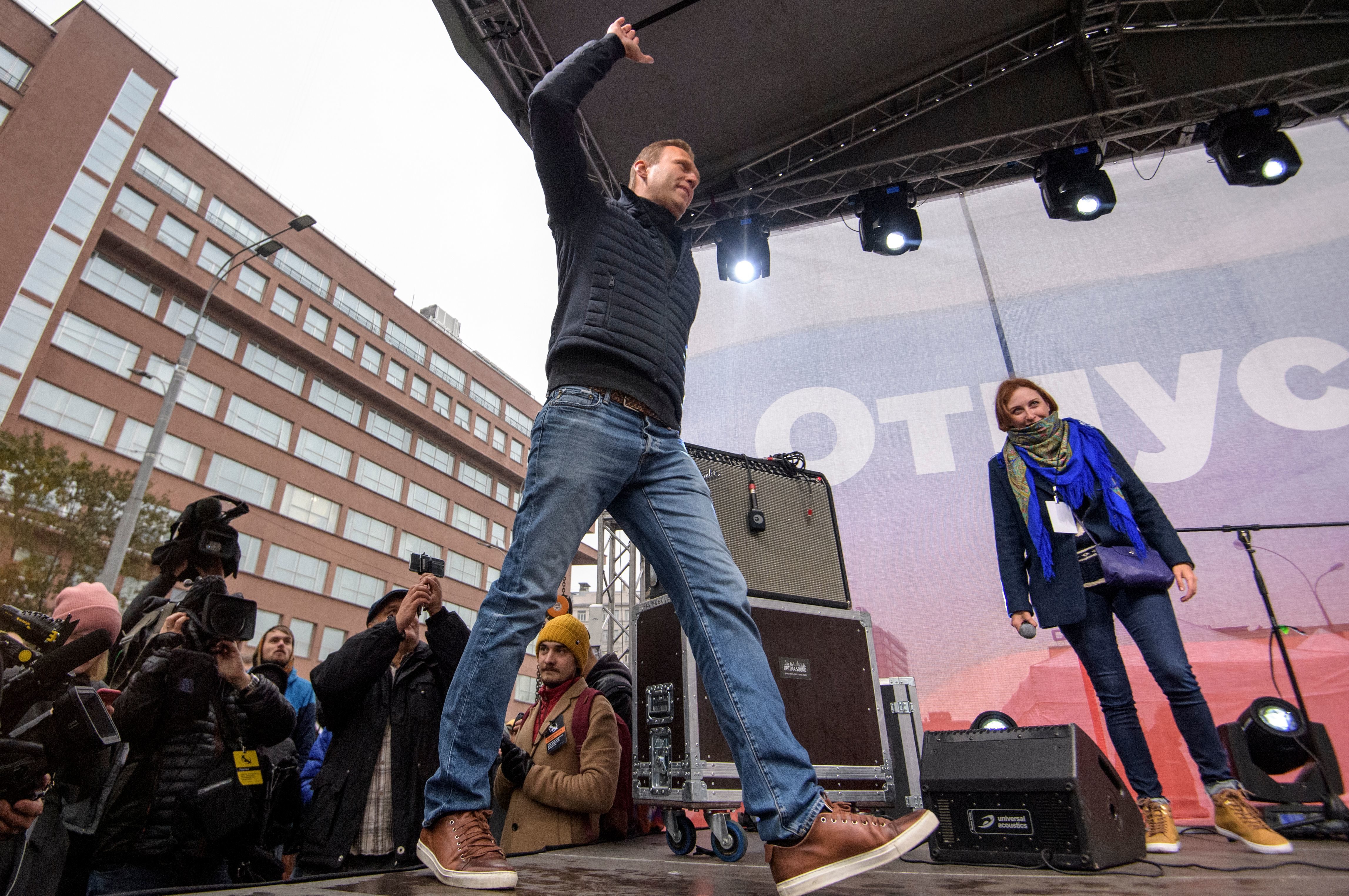 Russian opposition leader Alexei Navalny arrives on stage to deliver a speech during a demonstration in Moscow on September 29, 2019. (Photo by Yuri KADOBNOV / AFP)

Russian police and medical authorities have barred Navalny’s wife, personal physician, and director of Navalny’s foundation, the Anti-Corruption Foundation (FBK), Ivan Zhdanov, from entering the hospital, according to Yarmish. She also claims the police have demanded to search Navalny’s luggage. (RELATED: Anti-Putin Leader Arrested In Moscow During Protests Against Putin)

Alexei Navalny, who co-founded the Russia of the Future party, which opposes Vladimir Putin’s corruption, was allegedly poisoned last July during one of his stints in prison, according to the Daily Beast. Last October, VOA reported Navalny’s Anti-Corruption Foundation was designated a foreign asset by Russia’s Justice Ministry. (RELATED: Russian Opposition Leader Receives Third Jail Sentence Of The Year)

The Daily Beast added in their report that poisoning in Vladimir Putin’s Russia is nothing new. Russian-defector Alexander Litvinekov was poisoned with a radioactive isotope, polonium-210, in 2008. Another one of Putin’s political opponents, Vladimir Kara-Murza, has survived two poisoning attempts. These names are only a few of the many political opponents of Vladimir Putin who have had attempts on their life. The Kremlin has released no official statement, but members of the state-controlled Russian media have deflected blame and claimed this is not the work of Putin.

Nevalny has since been moved to a hospital in Berlin, Germany August 22. Yarmish updated the media and public on Nevalny’s condition, saying his condition is improving and no longer faces a serious threat to his life, according to Reuters.