Hurricane Laura is now forecasted to strengthen to a Category 4 hurricane as it heads towards Texas and Louisiana.

The National Hurricane Center described the swelling storm as “formidable,” saying that it has the strength to destroy homes and entire communities, according to the Associated Press.

“There are no signs that it will stop soon,” the center said, according to the AP.

Laura expanded by approximately 70% in a single day to qualify as a Category 3 storm, the AP reported. Winds reached speeds of 115 mph Wednesday morning as the storm moved at about 15 mph towards Lake Charles, Louisiana, the AP reported.

Laura is about 280 miles off the coast, the AP noted.

For this #WednesdayMorning, take a look at #HurricaneLaura with @NOAA‘s #GOESEast satellite as the hurricane’s convection bursts with lightning. As of 8 a.m. EDT, #Laura had winds of 115 mph and was rapidly intensifying in the Gulf of Mexico.

Meteorologists predict that the storm will have winds of 130 mph once it hits the coast, creating a storm surge that will affect up to 450 miles of U.S. coast from Texas to Mississippi, according to the AP. (RELATED: Meteorologists Predict A High Number Of Major Hurricanes In 2020)

“Heed the advice of your local authorities. If they tell you to go, go!” Joel Cline, a tropical program coordinator at the National Weather Service, told the AP.

Hurricane warnings have been issued in Texas and Louisiana, including some that were issued to communities hundreds of miles inland, the AP reported. Storm surge warnings span across both states, extending east to the Mississippi River delta, according to the AP. (RELATED: Hurricane Season Could Get So Bad They Might Run Of Names)

“Your life will be in immediate and grave danger beginning this evening if you do not evacuate,” Donald Jones, a meteorologist for the NWS in Lake Charles, Louisiana, told the AP. 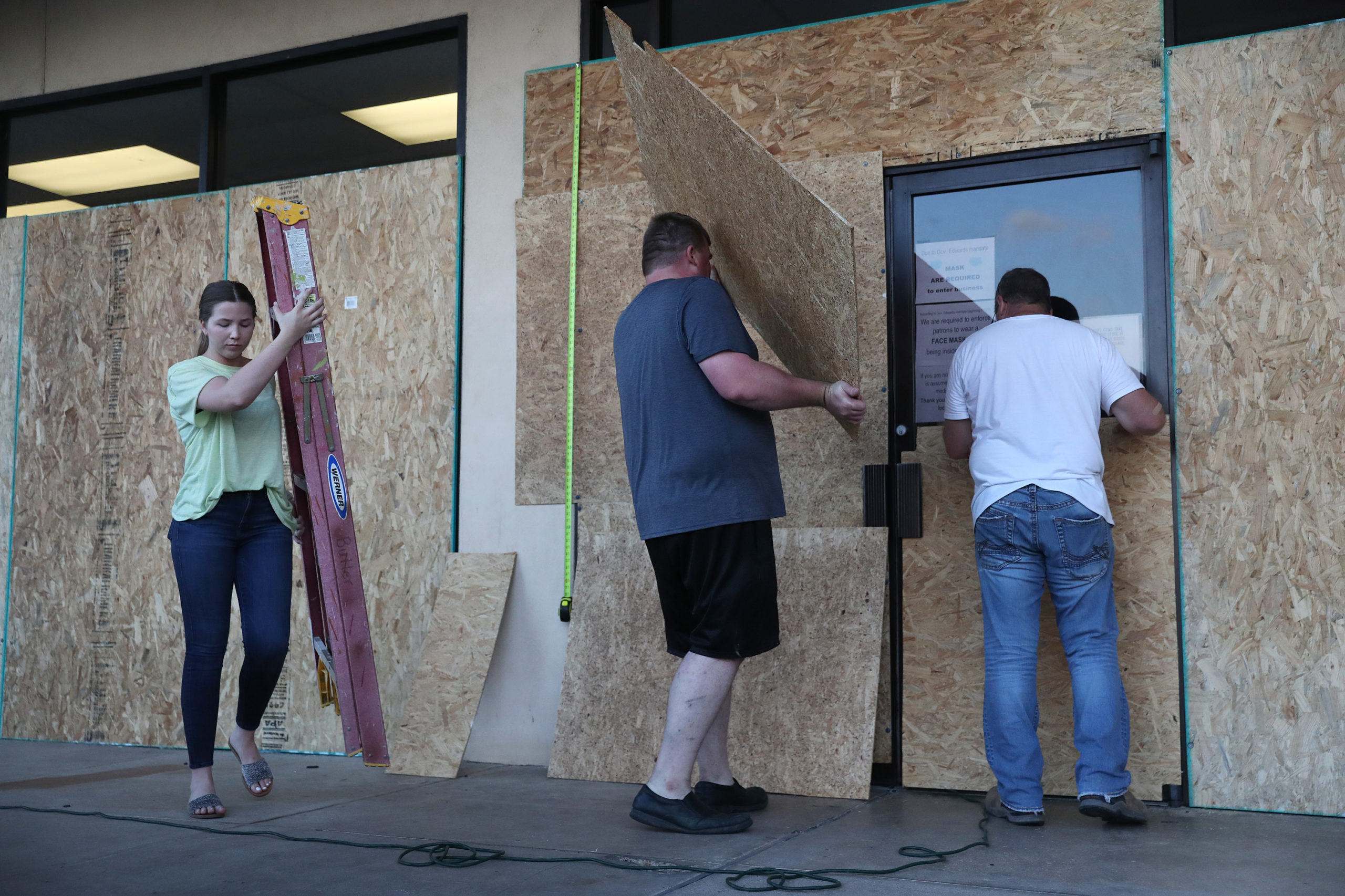 Lacey Buller, Tyler Arnold and Mike Buller work on placing plywood over the windows of their business before the arrival of Hurricane Laura on August 25, 2020 in Lake Charles, Louisiana. (Joe Raedle/Getty Images)

Flash flood warnings have been issued in numerous states including Arkansas and Missouri, both of which lie in Laura’s projected path, according to the AP.

The storm is so powerful that it is expected to circle to the east coast and become a tropical storm once again, threatening the northeastern U.S., once it moves offshore, the AP reported.

“If you decide to stay, you’re on your own,” Thurman Bartie, the mayor of Port Arthur, a coastal town on the Texas-Louisiana border, told the AP.

Laura has already killed nearly two-dozen people on Hispaniola, leaving its millions of residents without power and with flooded communities, the AP reported. The storm is expected to strike the U.S. just days before the 15th anniversary of Hurricane Katrina, which breeched the New Orleans levees and killed approximately 1,800 people.