The number of employees suing Whole Foods Market and parent company Amazon after managers allegedly told them to remove their Black Lives Matter masks has nearly doubled as the case continues to be litigated.

The 27 employees said that Whole Foods’s uniform policy was selectively enforced against people who wear Black Lives Matter masks, according to the lawsuit. The employees were all disciplined and in some cases were terminated, the suit alleges.

A lawyer representing Whole Foods on Aug. 18 denied in court that there was a policy of selective enforcement.

The federal class-action lawsuit was filed against Whole Foods with 14 plaintiffs on July 20. A reply brief in support of that filing was filed on Aug. 11 with 27 plaintiffs and listed Amazon as a co-defendant. (RELATED: ‘Standing Up For What’s Right’: Taco Bell Employee Says He Was Fired For Wearing Black Lives Matter Mask)

“Whole Foods and Amazon have shown their support for the Black Lives Matter movement through donations and messages on their websites,” Suverino Frith, the lead plaintiff, told The Daily Caller News Foundation.

He continued: “You would think they would be open to supporting it explicitly in their stores.” 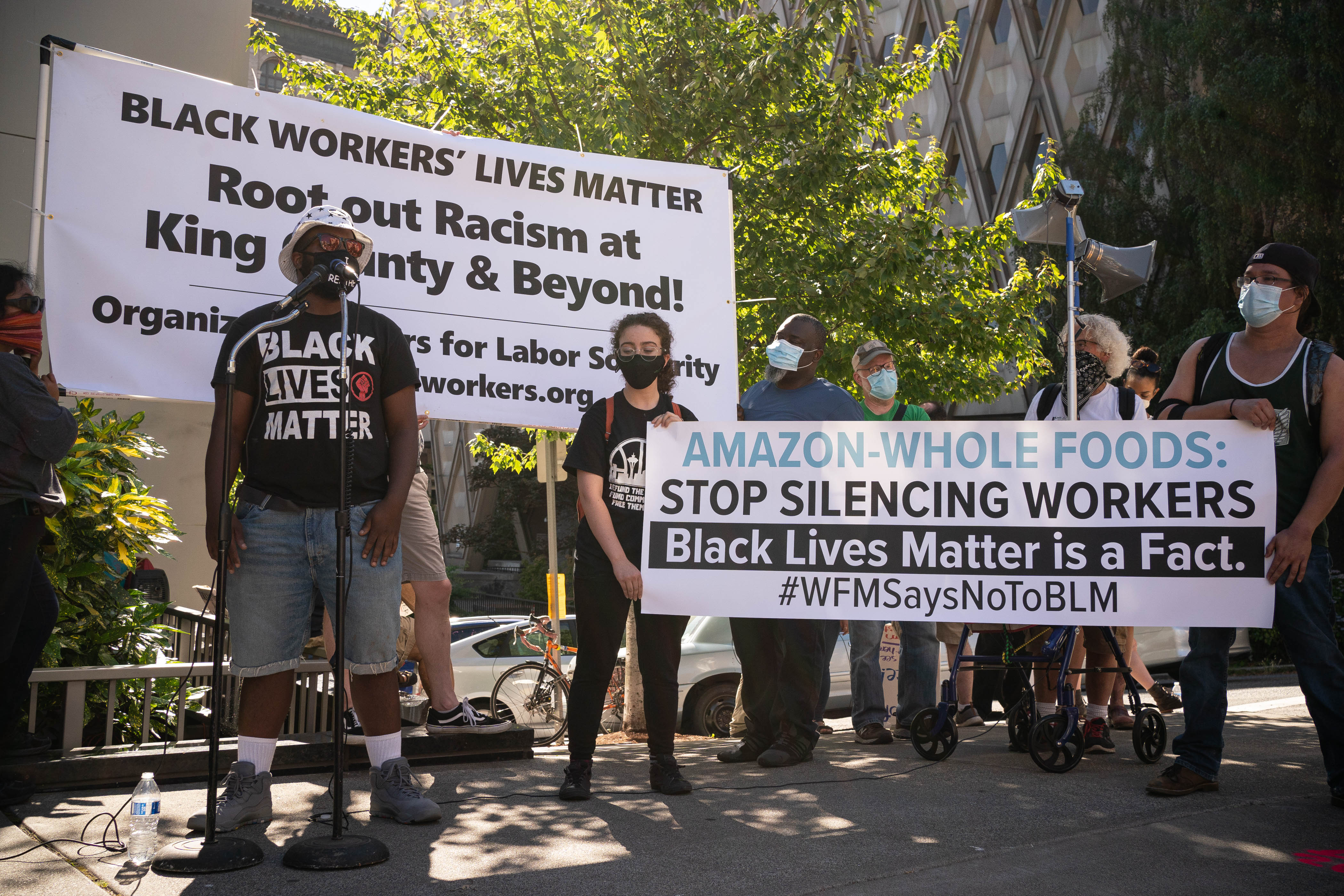 Workers from a Seattle Whole Foods speak as part of the nationwide Strike For Black Lives on July 20. (David Ryder/Getty Images)

“Black lives matter. We stand in solidarity with our Black employees, customers, and partners, and are committed to helping build a country and a world where everyone can live with dignity and free from fear,” Amazon said in a June 3 statement.

Similar cases have occurred at Taco Bell, Wawa, Costco and Chick-Fil-A. Starbucks and Wawa have begun allowing employees to wear Black Lives Matter masks at work, according to Business Insider.

Frith, who has been a Whole Foods employee in Cambridge, Massachusetts, for about two years, began wearing a Black Lives Matter mask after George Floyd died on May 25 in police custody, Frith told the DCNF.

The 21-year-old was approached in June by co-worker Savannah Kinzer, who told him that Whole Foods employees in New Hampshire had been sent home for wearing Black Lives Matter masks, according to court affidavits shared with the DCNF. She then gave him a mask and told him she was organizing employees to wear the masks in support of those employees.

Frith, Kinzer and 11 other employees began wearing masks that said “Black Lives Matter” on June 24, according to Frith’s affidavit. By the end of the day, management had informed them that their masks were in violation of Whole Foods uniform policy and they were all forced to clock out early after refusing to take off their masks. 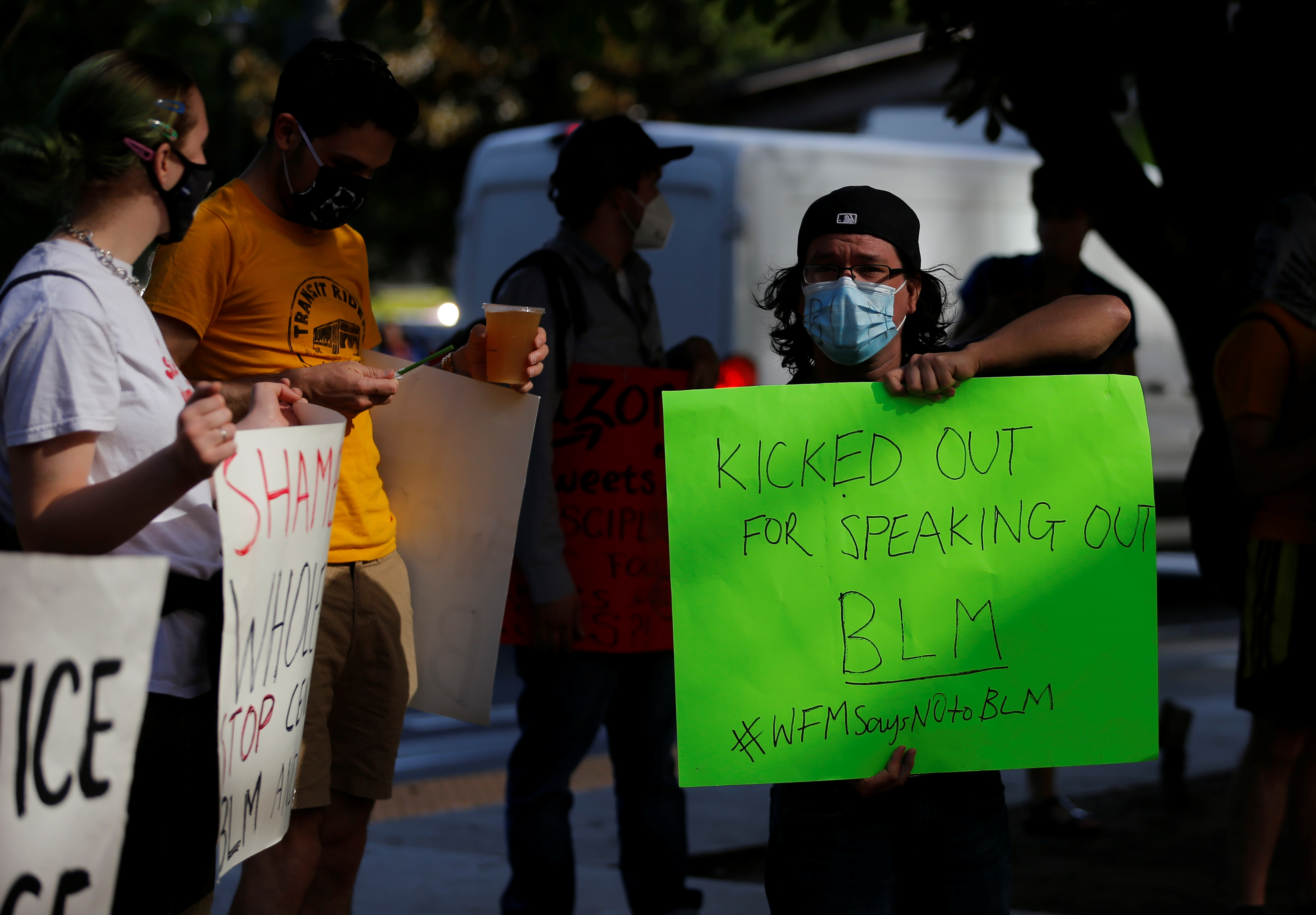 A Whole Foods employee who says he was written up for wearing a mask with “BLM” written on it, protests with other employees of a Seattle Whole Foods on June 25, 2020. (Lindsey Wasson/Reuters)

Since then, the number of employees wearing masks and subsequently asked to clock out early has increased. Whole Foods employees in New Jersey, Washington, California, Virginia, Pennsylvania and Indiana have all joined the protest, according to the reply brief.

Kinzer, meanwhile, was fired on July 18 after informing her manager that she had filed a discrimination charge against the company for not allowing her and her co-workers to wear Black Lives Matter masks, according to her court affidavit.

“As an employer we must uphold our policies in an equitable and consistent manner,” the spokesperson continued. “Savannah had full understanding of our policies and was given a number of opportunities to comply.”

Whole Foods confirmed that Frith is still an employee. The company would not comment on the specifics of the lawsuit. (RELATED: Protesters In DC Claim Whole Foods Is Racist, Call For It To Be Shut Down) 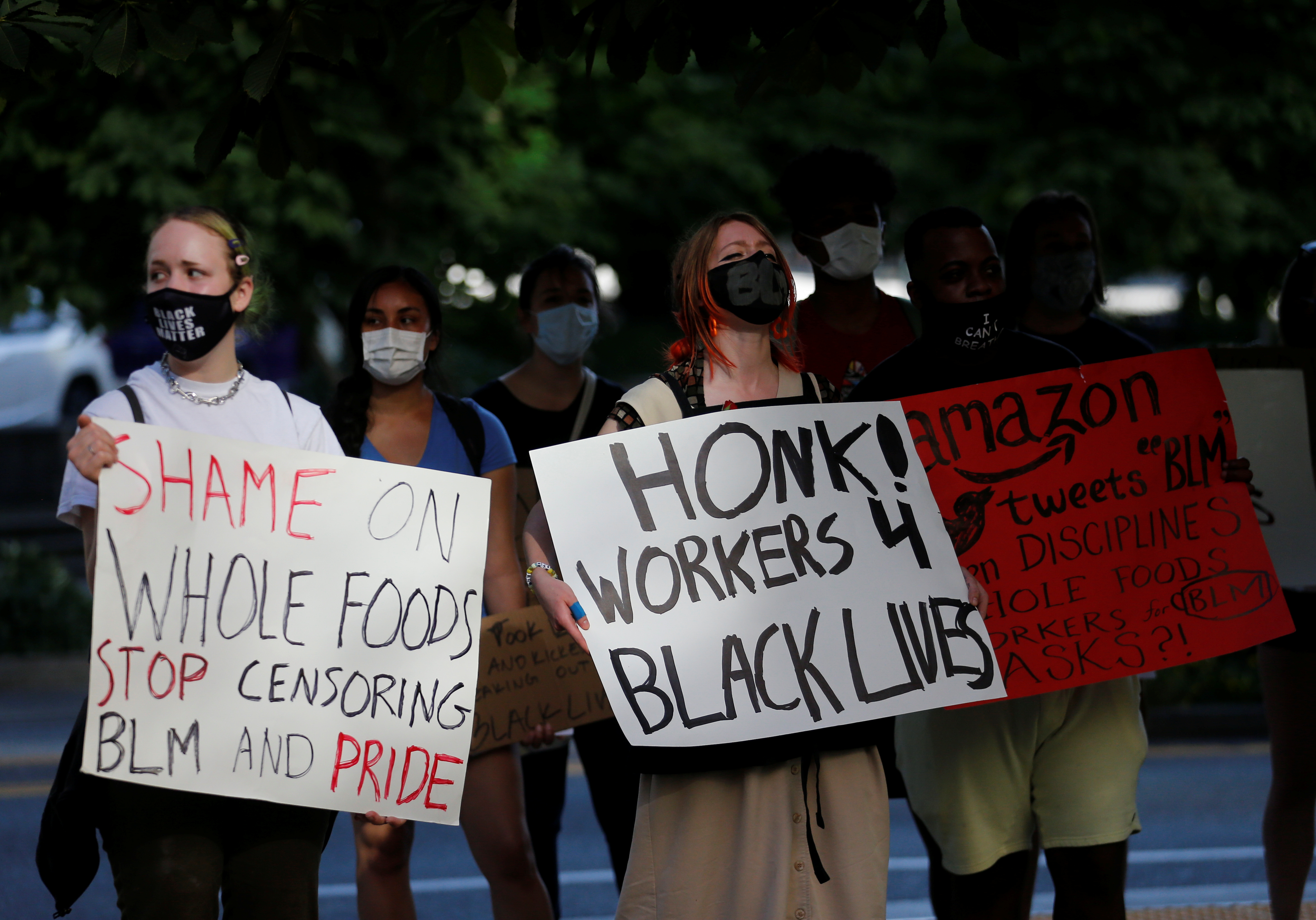 “We’ve gathered evidence now from all these locations around the country that Whole Foods was incredibly lax in enforcing its dress code policy,” Shannon Liss-Riordan, the lawyer representing the plaintiffs, told the DCNF.

“People wear ‘pride’ flags and pins, and that’s never been an issue. But all of a sudden, when workers started bringing out Black Lives Matter masks to support black employees, that became an issue for the company.” (RELATED: Amazon To Add Thousands Of Tech, Corporate Jobs In 6 American Cities)

Liss-Riordan, a well-known Boston labor lawyer and former Democratic Senate candidate, said Whole Foods’s dress code has been applied in a discriminatory and retaliatory way. She said the company violated the Civil Rights Act of 1964, which prohibits employers from discriminating against employees based on race.

“It’s very important for employers to be aware that when their employees are speaking out on issues involving discrimination and racism, that they run a big risk if they crack down because that’s retaliation and that’s also illegal,” Liss-Riordan said. 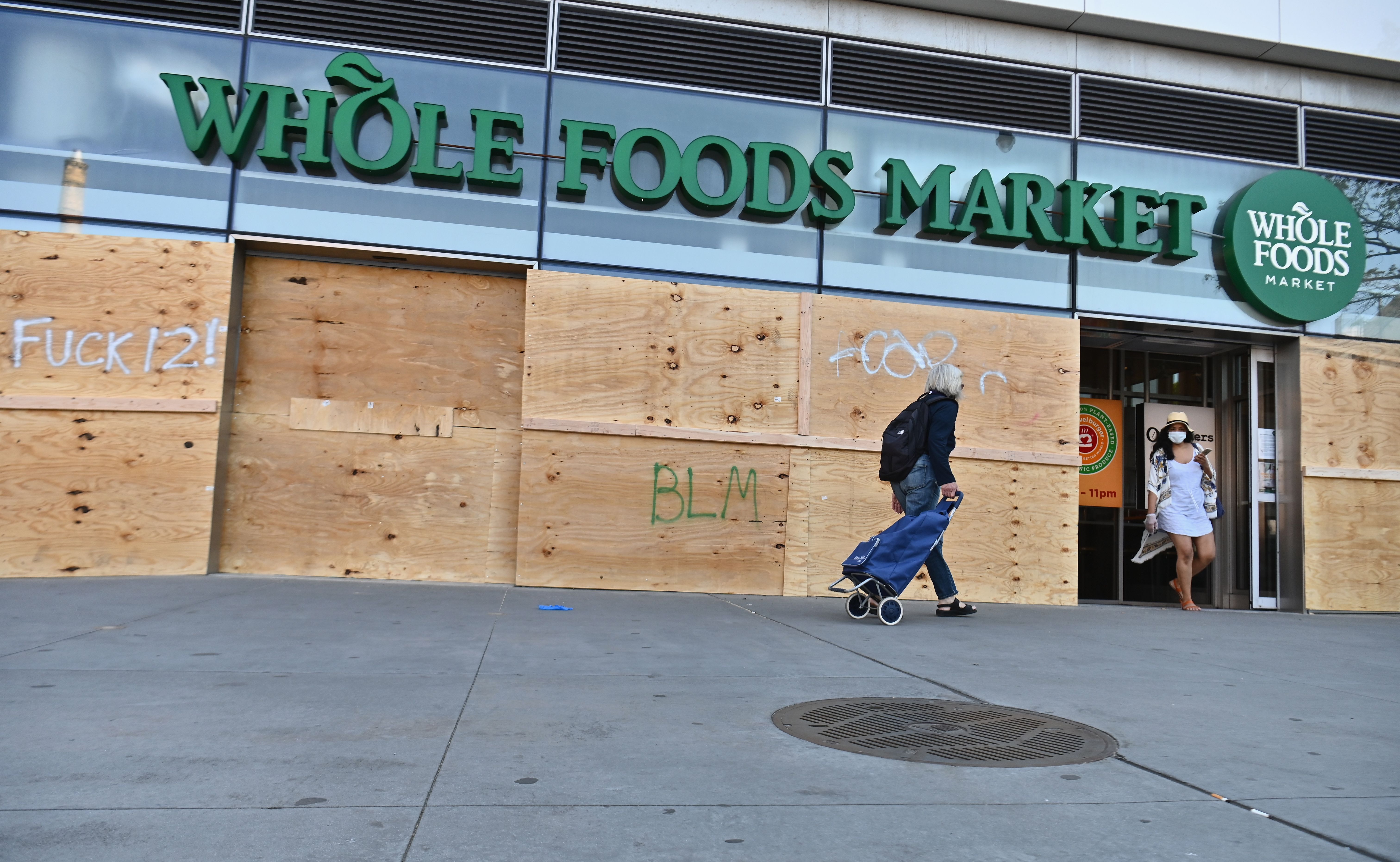 People go shopping at a Brooklyn, New York Whole Foods Market store, which is boarded up on June 1 after a night of protest over the death of George Floyd. (Angela Weiss/AFP via Getty Images)

However, it is not clear if this is a winning case for Liss-Riordan and the nearly 30 Whole Foods employees who say they were discriminated against, according to Walter Olson, senior fellow at the Cato Institute’s Robert A. Levy Center for Constitutional Studies.

“If the best they can find is that they were allowing gay rights messages, would a judge let that get to a jury? I can’t say for sure,” Olson told the DCNF. “But, it doesn’t sound like that strong of a case to me.”

Whole Foods doesn’t have a large burden of proof, according to Olson. The employees, on the other hand, need to prove that there was a larger problem with how the company treated race in the workplace.

“You’ve got to have a pattern where it’s impossible to explain the combination of decisions,” Olson said. (RELATED: Amazon To Give $500 Million In Bonuses To Employees Who Worked During The Coronavirus Pandemic)

He added: “The law is realistic enough to understand that companies do not have to permit something to go on forever because they permitted it once or even ten times.”

Olson also noted that a single employee wearing a political message on their mask is different than a group of employees coordinating an effort to all wear the same message. That type of coordination would have a different effect on the customer.

“Courts aren’t looking to trip up employers on things like dress codes where it’s long recognized that there are legitimate employer interests in presentation and messages sent in uniformity,” Olson said. 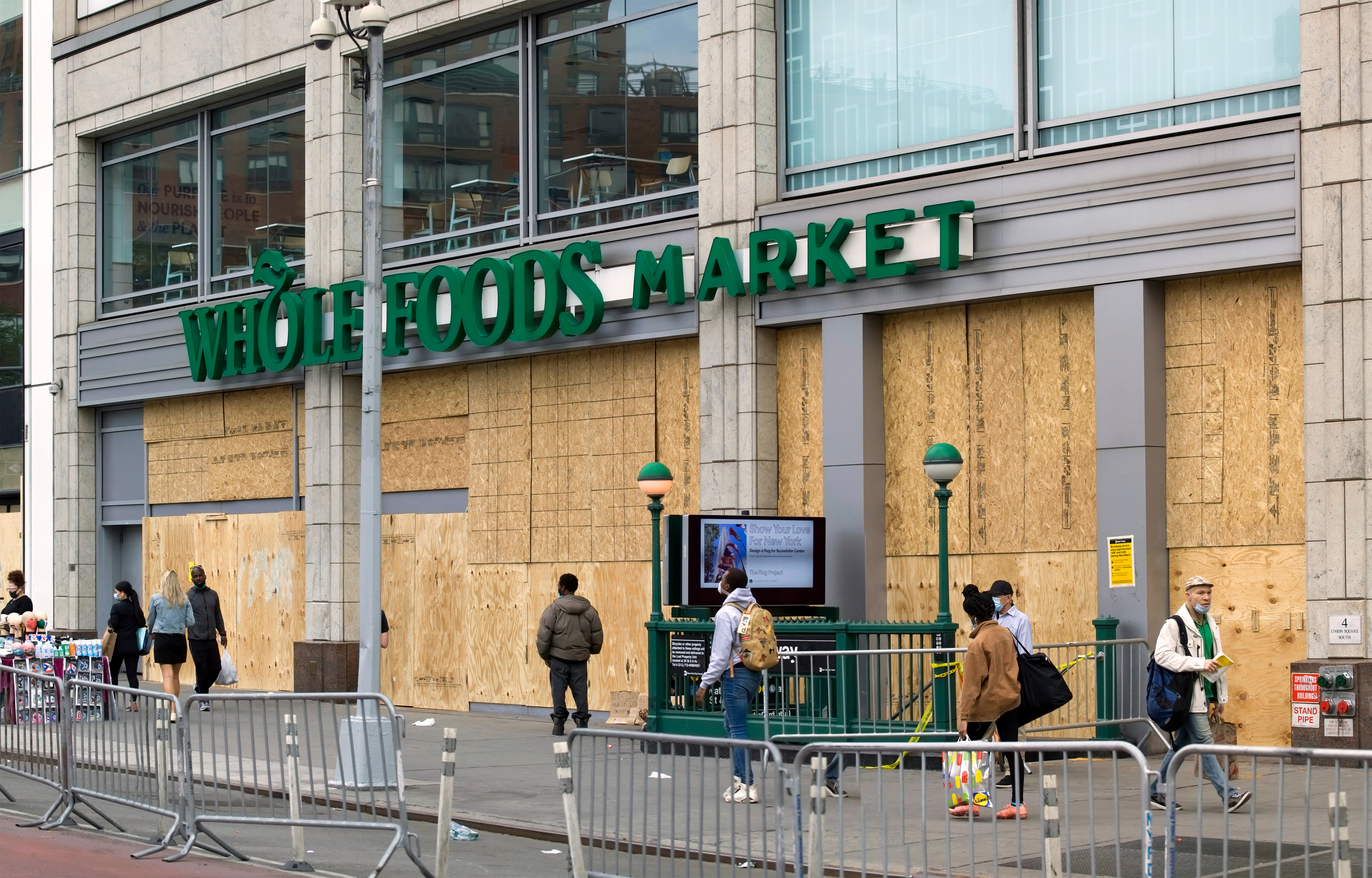 A Whole Foods Market is boarded up to prevent looting during George Floyd protests in New York City on June 2. (Eddtoro/Shutterstock)

The plaintiffs request that the imposed discipline be immediately expunged, that the fired employees, including Kinzer, to be reinstated, and that Whole Foods workers be allowed to wear Black Lives Matter masks.

Lawyers representing Whole Foods previewed their argument at a virtual preliminary hearing on Aug. 18 in front of Judge Allison D. Burroughs, who was appointed to Boston’s U.S. District Court in 2014 by former President Barack Obama.

“Our declarations, we believe, will demonstrate that enforcement as a policy in practice has not been selective like any work rule,” said Michael L. Banks, one of the lawyers representing Whole Foods. “It is certainly possible that at times in the past there have been instances where a work rule was not enforced.”

He continued: “For example, a lateness case. An employer has a rule against lateness or absenteeism, no employer can ever say that any employee who ever showed up late was always caught and disciplined. Our position will be that there is no policy or practice of selective enforcement.”