A Franciscan priest has deleted a tweet in which he likened Sr. Deidre Byrne, a nun who spoke at the Republican National Convention (RNC), to a Nazi supporter.

“Donald Trump is the most pro-life president that this nation has ever had, defending life at all stages,” Byrne said Wednesday night. (RELATED: ‘The Most Anti-Life Presidential Ticket Ever’: Nun Condemns Joe Biden And Kamala Harris For Abortion Policies At RNC)

She continued: “His belief in the sanctity of life transcends politics. President Trump will stand up against Biden-Harris, who are the most anti-life presidential ticket ever, even supporting the horrors of late-term abortion and infanticide.”

“Last night was a shocking and sad reminder that not all religious sisters stand on the side of the oppressed, poor, marginalized, and victims of history,” Horan tweeted in response to Byrne’s remarks. “She may be anti-abortion, but she is as far from being authentically Pro-life in the Catholic tradition as this nun in 1940s.”

Horan’s tweet included a picture of a nun standing in a crowd holding out her arm in a “Heil Hitler” stance — a picture known as “The Nazi Salute.” A swastika is also visible in the photograph. The photo was reportedly taken in Dauchau, Germany, in 1935, according to the United States Holocaust Memorial Museum. 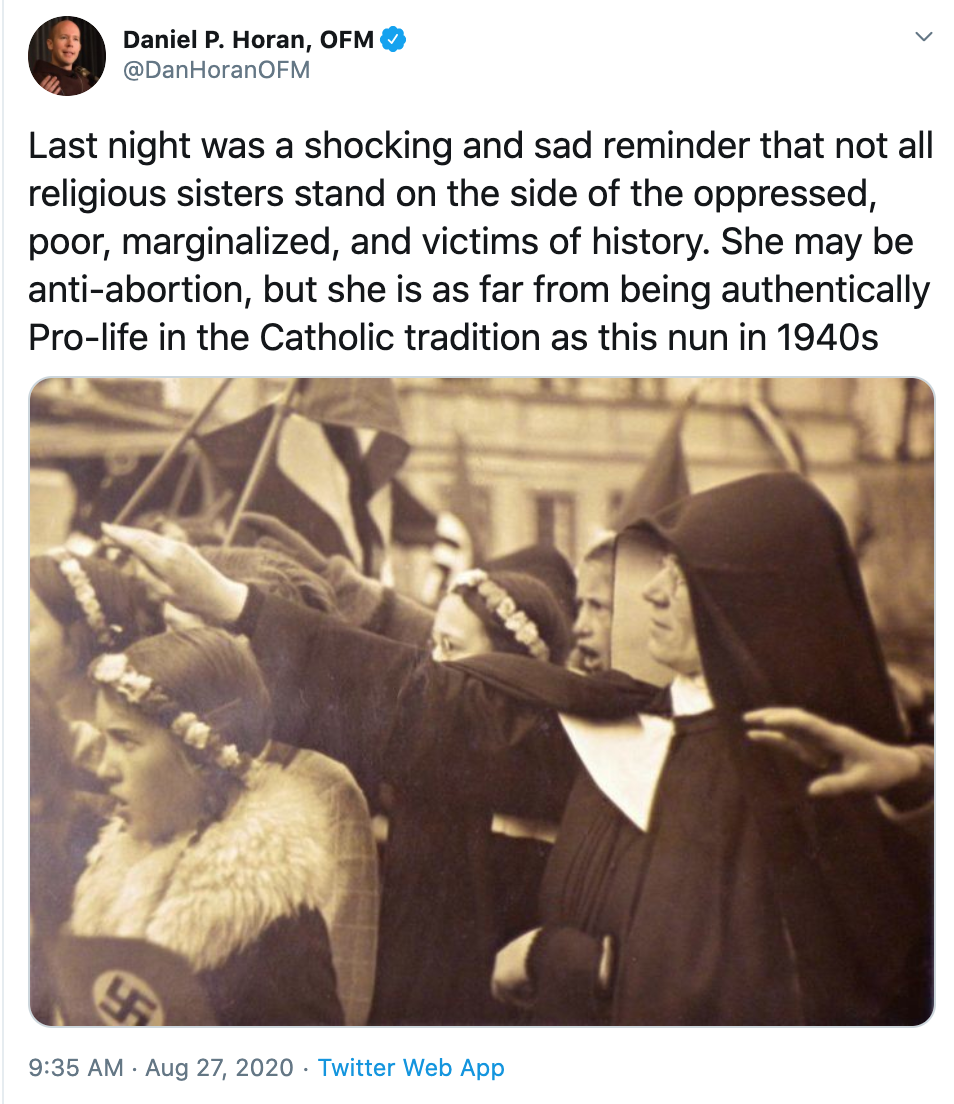 “I have decided to take down an earlier tweet, which has been misunderstood, highlighting dangers of Catholic religious endorsing political parties, showing the historical precedents for such atrocities of religious supporting political movements rooted in fear, hatred, division,” he tweeted.

“I’m not generally in favor of removing tweets, but in the wake of such malicious misinterpretation, I figured it was the right move in this case,” He added. “That said, my point stands and it supported by church teaching against political endorsements by bishops, priests, and religious!!”

Horan could not be reached for comment. His order, the Franciscans of Holy Name Province belonging to the Order of Friars Minor, did not immediately respond to a request for comment from the Daily Caller News Foundation.